TVA calls for removal of all houseboats 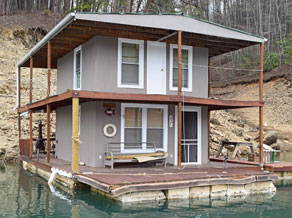 The Tennessee Valley Authority has proposed doing away with more than 1,800 houseboats that occupy various lakes under its jurisdiction.

If the TVA Board of Directors chooses to accept the staff’s proposal, owners of all the houseboats will be responsible for removing their property from the lake within the next 20 years.

Scott Brooks, a spokesperson for TVA, said the recommendation was made after researching concerns about the houseboats and gathering feedback from the lake communities for the last two years.

“Our biggest concern is the number of structures out there on TVA’s various reservoirs,” he said. “The process was initiated out of concerns about safety, sanitation and water quality.”

In addition to environmental concerns, the TVA also has issues with houseboats occupying public water without paying taxes, not meeting the TVA’s building regulations and hindering others’ access to water recreation. Brooks said a private developer wouldn’t be able to construct a subdivision on national park land and the same should be true for public waters.

As the number and various types of houseboats on TVA lakes has increased over the years, the amount of enforcement to make sure the structures meet TVA regulations has decreased. Marina owners on Fontana Lake say they haven’t seen a TVA cop patrolling the lake in years, and Brooks said that is one of the reasons the houseboats need to go.

“Over the last six years our police force has been altered. Patrolling waterways is not something we do anymore,” he said. “The enforcement of recreational boats is the responsibility of the state — the Wildlife Service enforces boating regulations.”

In 1971, the TVA amended its regulations to prohibit any new houseboats on its reservoirs, but without proper enforcement, the number has continued to increase and houses already on the lakes have been added onto and expanded without proper permitting.

Owners of floating houses on Fontana Lake in Graham and Swain counties say they understand the TVA’s concerns, but argue they aren’t the ones causing the problems. Since most of the TVA’s reservoirs are located in other states, Fontana owners feel they are being punished for the bad management of lakes in Tennessee.

“I know the problems they’re having in Tennessee — people are trying to privatize the lakes — I can see that’s a problem, but we don’t have these problems on Fontana,” said Tony Sherrill, owner of Alarka Boat Dock. “That’s why it’s hard to understand for the people here. Our lake is public. People can boat, hunt, fish and camp anywhere they want.”

Sherrill and others on Fontana point to Lake Norris as a perfect example of mismanagement — the lake’s 900 floating houses are tied up and float out in the middle of the lake. Many are hooked up to shore power with power lines stretched across the water and some are dumping sewage into the lake.

Fontana has safeguards against all those issues. Marina owners aren’t allowing new houses to be built, all houseboats are tied securely to the water’s edge, most get their electricity from a generator and the counties have ordinances in place requiring proper septic removal.

Brooks said another issue was having floating houses occupy public waters while not paying taxes to anyone. While that might be true of some other lakes, floating house owners on Fontana assure the TVA they pay property taxes to Swain or Graham counties.

There was a push about 15 years ago to clean up Fontana and stop houseboat owners from polluting the lake with sewage and grey water. The Fontana Lake Users Association formed and lobbied officials in Swain and Graham counties to pass ordinances regulating houseboat waste.

Swain County Commissioner David Monteith said the counties secured more than $700,000 in grants to get a fleet of pump boats up and running to service the houseboats. Houseboats now collect their own sewage in tanks and have it pumped out and hauled ashore periodically by boat dock owners.

Monteith said the plan has worked out beautifully by cleaning up the lake and also making sure everyone on the lake is paying county taxes. Houseboat owners must display a sticker on the outside of their boat showing they are in compliance with the law and have to provide a copy of their pumping contract with a boat dock owner to receive the sticker.

“Now they all have flushable toilets and pay their taxes,” Monteith said.

The counties and private houseboat owners have all done their own water testing on Fontana since the counties passed these ordinances, and the results have been fairly consistent.

Swain County Health Department officials commissioned a large-scale water quality study in 2006. The sampling was done in multiple places for multiple days during the middle of summer when theoretically water quality issues would be the highest with a full lake of boathousers and high lake levels.

Bob Gurley, who has owned a houseboat for 12 years on Fontana, paid to have his own water quality test from Watertech Labs — an EPA-certified testing lab — and all the results showed that the lake is in great condition as far as coliform, nitrates, turbidity and other indicators.

“He came back and said this water is good enough to drink if you had to,” Gurley said.

Scott Collins, whose family has owned a houseboat on Fontana since 1965, said the water is pristine and the counties and houseboat owners have all spent a lot of money to get it that way. However, he said the TVA wants to lump Fontana in with its other lakes and just be rid of the hassle of regulating floating houses all together.

“Every problem they’ve mentioned doesn’t apply to Fontana,” he said. “I’ve maintained our original TVA permit all these years, but I’m getting linked in with the Norris people who didn’t even register these huge houses on the lake and we’re getting punished for that.”

Houseboat owners on Fontana have their own suspicions as to why the TVA is pushing so hard to get rid of all the houseboats.

Eric and Laura Sneed, houseboat owners who started a petition to present to the TVA, think there are a number of factors TVA isn’t talking about. Perhaps the TVA is trying to downsize its operation, which leaves no funding for enforcing the houseboat regulations in place and bringing violating houses into compliance.

“They’re wanting houseboats off the lakes so they can do away with actual personnel that has to do paperwork for these kinds of things,” Sherrill said. “They should police these houseboats, but they don’t do it so this would save them money. I don’t see any other reason for it.”

Eric Sneed also thinks the TVA is getting pressure and complaints from environmental groups and mountaintop homeowners who have to look down and see houseboats on the lake. While the TVA points to water quality concerns, Eric said it has no concrete proof the houseboats are negatively impacting Fontana Lake.

Photos included in the TVA’s final environmental impact analysis show houseboats with portable toilets and wastewater discharge pipes being dumped in lakes, but none of the photos are from Fontana.

Brooks said the TVA has made its recommendations to the TVA board, but the public won’t know whether the topic and/or a decision will be reached at the May 5 board meeting until the agenda is released April 28.

“We don’t know if the board will be considering it or not,” he said.

The TVA board members are nominated by the President of the United States and confirmed by the Senate, and each serves a term of five years. None of the current members reside in North Carolina.

The May 5 meeting will be held in Buchanan, Tennessee, more than six hours west of Swain and Graham counties. Monteith said he is planning to attend the meeting to express the county’s opposition to the TVA’s proposal.

“Do I think their minds are already made up? Probably, but it won’t stop us from trying,” he said.

Graham County has already passed a resolution opposing the TVA’s recommendation to remove all houseboats in 20 years, and Swain County plans to pass a similar measure this Thursday night. Marina and houseboat owners also plan to make the long trip to ensure their voices are heard.

U.S. Rep. Mark Meadows, R-Cashiers, has also sent a letter to the TVA expressing his opposition to the sunset clause for houseboats. In his letter to TVA President William Johnson, Meadows explains the importance of Fontana as a recreational asset and an economic engine for the region.

“I ask that any new policy put forth by the TVA fully consider the consequences for the local economy and community life,” Meadows wrote. “Furthermore, I ask that any proposal respect the legitimate interests of every stakeholder, whether they are houseboat residents, tourists, employees of local business or anyone who simply enjoys Fontana Lake.”

Floating houses are a modern version of the pre-1978 non-navigable houseboats.

Floating houses are considered to be structures designed and used primarily for human habitation rather than for the primary purpose of recreational boating or water transportation.

A boat no longer capable of navigation or water transportation, which is used for habitation, may be considered a floating house by TVA.