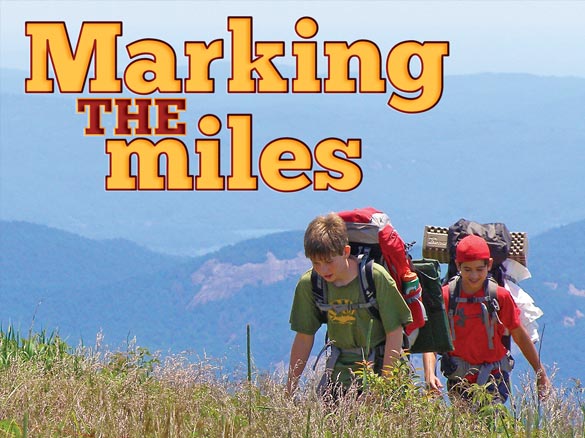 The outdoors have been a powerful force in the lives of Jim Parham and MaryEllen Hammond.

The Nantahala River was what first drew them in, Hammond in 1978 for a job with Nantahala Outdoor Center and Parham later, in 1990, when NOC bought the rafting company he’d been working for previously.

The two met, married and decided that exploring the outdoors should always be part of their lives — personal and professional. They settled in Swain County and in 1991 founded Milestone Press, an independent publishing company focused on creating high-quality trail guides for the Southeast. The first book published in 1992.

Milestone is now 25 years old, and the company is still going strong, having just released three new books on hiking and mountain biking the Pisgah National Forest and DuPont State Forest. Parham handles the research and writing,though Milestone does publish other authors as well, and Hammond takes charge of the copyediting and production side of things.

When it comes to WNC, there’s plenty of material for a trail guide publisher to draw from.

“We have so much beauty that it’s hard to fathom how people or why people live in other places,” Parham said. “I’m kind of glad they do, though, because we would have so many people around here!”

SEE ALSO: A day in the life of a mountain bike guidebook author

In the shadow of the country’s most-visited national park, many of the trails Parham writes about snake through some of the most-used national forest areas in the region. Even in the backcountry, solitude isn’t always a given. But it exists, for those willing to seek it out.

That’s where Milestone Press comes in.

In the early 90s, when the company was first born, the world of backcountry exploration in WNC was a lot different. Mountain biking was just catching on in a big way, and notoriety was new to many of WNC’s trails.

“The retail part of it wasn’t ready for the number of people that were all of a sudden showing up with bicycles wondering where on earth they were supposed to ride these things they had bought,” Parham said.

There were fewer outdoor stores then, too, and the stores that did exist “were just overwhelmed with people showing up at their doorstep wondering where to go ride,” Parham said. “The employees would spend a lot of time describing how to get to certain places.”

Thus, the business opportunity that allowed Milestone Press to surge into being.

Things are different now. People in the market for a guidebook can peruse a seeming multitude of options on bookstore shelves — but there are also more people in that market, more stores catering to the outdoors crowd.

The changing of the times manifests on the trail, as well. When Parham first began his life as a guidebook author, a new trailhead was a gateway to a veritable unknown. In the 1990s, there wasn’t too much online pre-hike reading available.

“When I first started, I would go out in the woods and sure, people had been there before, but unless I had actually spoken to them, it was totally new information,” Parham said. “I didn’t know what I was getting into.”

There’s also the prevalence of cell phones, a trend that unfortunately — in Parham’s view, at least — extends to the backcountry. He recalls seeing people, for instance, playing bird calls from their phones only to come face to face with a group of disappointed birders, who had thought the sound they were chasing belonged to an actual avian. Or hikers chugging along a path while working on a text at the same time.

“I think it’s offensive to people to be around other people who are using that kind of technology (on the trail),” Parham said.

If anyone’s likely to have a read on backcountry users’ sensibilities, it’s Parham. In 24 years, he’s logged a formidable number of days and miles in the woods, especially given his commitment to extensive ground-truthing before publishing even the simplest hike.

“I pretty much refuse to put anything in print that I haven’t been there in person, physically, a number of times so that I feel like I know the area, I know the trail, I know the terrain, I know the plants that are growing there, the animals you’re going to see, what the creeks are like at high water and low water,” Parham said.

“He actually will spend weeks and sometimes months doing fieldwork,” Hammond said. When completing his most recent mountain biking guide, for example, Parham would head out for a week of biking and sleeping in a vehicle at the trailhead in his Subaru, come home for the weekend, and then ship out again on Monday for the same routine.

“Oftentimes people will say, ‘That sounds like a great job,’” Parham said. “’You go out in the woods and have fun all the time.’ And in a way they’re right, but when you’re out there and it’s about 33 degrees and raining, you’re not exactly what you’d call enjoying yourself.”

Deadlines are deadlines, and the weather doesn’t always wait.

And Parham’s guidebook author mode of hiking and biking is a lot different than his just-for-fun mode.

When working, he said, “I’ll just be walking along coming up with idea. I can see how something is going to look on a page, and I’ll sit down and write that part. I would never do that if I’m just out having fun.”

Parham the guide author carries a couple of cameras, a pair of GPS units and a notebook in addition to all his outdoors gear. He stops frequently to take notes, ensures he has all the GPS information he’ll need to painstakingly draw his maps later, and he’s almost always alone. Parham the outdoor enthusiast, meanwhile, leaves the equipment at home, takes no notes and often has company on the trail.

The process has gotten easier over the years. In more than two decades, Parham’s gotten to know the backcountry trails and terrain pretty well, so the individual projects aren’t quite as time-consuming as they used to be.

But he’s also gotten better at seeing the trails through the eyes of those less experienced than himself. Now, he finds himself leading a lot of rides for kids at camps, and while that’s fun, not work, it’s been pretty educational.

“You start realizing not everybody can ride a 15-mile loop before lunch,” he said. Those refined sensibilities can help inform his work later on.

“Very few people are the mountain biker that Jim is,” Hammond said.

Stories of doing and being

Though she’s certainly a lover of the outdoors herself — the family, which includes the couple’s college-age son, has hiked together in Europe, biked along Hadrian’s Wall in England and paddled the Grand Canyon — Hammond doesn’t often go along on Parham’s research trips.

But she does get to hear his sometimes-harrowing tales when he returns. Like, for instance, the time he was biking Laurel Mountain Trail in the Pisgah National Forest and the bolt holding his seat down broke.

“For a while, I was actually able to find another bolt that held on something else that wasn’t as important and get it in there, and that worked for a little while even though the seat was at a crazy angle,” he recalled. But then the substitute bolt broke, so he just had to complete the ride without a seat. There were no cell phones in those days. He had no choice but to make it work.

Oddly enough, Hammond said, it seems she worries more about Parham’s on-trail well-being now than she did in those pre-cell phone years.

“I think I get more anxious now than I used to,” Hammond said. “I don’t know, I just have always had faith that he would be fine. I want to say I almost wish you hadn’t told me those stories.”

Not that Hammond doesn’t have stories of her own. Milestone publishes titles by other authors in addition to Parham, including three books on motorcycle adventures by Hawk Hagebak.

For the couple, one of the hardest things about the job is picking a favorite. Which is better — hiking, mountain biking, waterfall spotting?

Which is why, despite the chilly, rainy days on trail, the stress of working under deadline and paychecks that don’t measure up to what a person could earn climbing through the corporate world, Parham and Hammond are grateful to have been doing what they’re doing for so long.

“The root of it is we’ve chosen this path because it allows us to do and be what we want most of the time, and live where we want to live,” Parham said. “I guess that’s it in a nutshell.”

Trail guide author Jim Parham has explored a lot of trails in his day. But when asked his favorite spots in Western North Carolina, he had a handful of top picks ready to name.

• The Joyce Kilmer-Slickrock Wilderness. “Not many people get back in there because it’s so rugged.”

• Slate Rock. “It’s one of those places where it’s quiet. You can hear the wind blowing.”

• DuPont State Forest. “DuPont to me doesn’t feel like being in the backcountry, it’s so at the heart of development,” but it’s “a really unique area.”

• Hiking and Mountain Biking DuPont State Forest by Scott Lynch is a 119-page pocket guide including maps and descriptions for both popular and lightly used trails in the waterfall-rich area.

The books are available at local bookstores or online at www.milestonepress.com.