Me and your pet rabbit can now share a meal 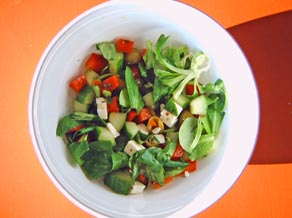 A few weeks ago, I suddenly developed a thirst that I could not seem to quench. No, this is not a metaphor. For days, I drank water by the quart — and probably a gallon of orange juice — but no matter how much liquid I consumed, in less than an hour, I would be thirsty again. Of course, this led to several sleepless nights, as my body became a living, breath recycling plant. I was exhausted, but I was up and down all night at the mercy of my relentless thirst.

I also realized I couldn’t see straight. Again, not a metaphor. Everything had become blurry, as if I had forgotten to put on my glasses. With or without them, I could no longer read road signs. The characters and backgrounds on our high definition television softened and bled into each other like little pools of colored ink. I kept cleaning my lenses to no avail.

There were a few other symptoms as well. I got tired walking up a flight of stairs, and I had lost about fifteen pounds over the past few weeks, which I naively attributed to a few lunches at Subway instead of the Chinese buffet. After two consecutive nights of very little sleep, I typed my symptoms into Google and there it was, instantly, big and obvious and definitive.

Diabetes. Type 2. Judgment Day had come at last. At least that is how it felt. Of the Seven Deadly Sins, gluttony, for me, must rank at or near the very top.

I’ve got my reasons. As a youth, I was built like an exclamation point, skinny and emphatic. A local druggist, overcome with compassion, once offered to buy me a hamburger if I would only eat it. Because my body looked like a bag of coat hangers, he thought I was starving. He could not have guessed that I ate everything I could find that was not green — hamburgers, hot dogs, fish sticks, fried chicken, breakfast cereal and Pop Tarts, mashed potatoes and gravy, ice cream by the box. For me, a box of ice cream consisted of exactly two servings — the first eaten out of a medium-sized mixing bowl, the second out of the box itself. I am surprised that my mother did not have to take on a second job to pay for my addiction to Fudge Royale ice cream.

No matter what I ate, I did not — could not — gain weight. My Nana said I had a tapeworm. I loathed being so skinny, vowing one day to be as big and muscular as the behemoths in my professional wrestling magazines. I guess I figured I was “immune” to food. I could eat whatever I wanted and it didn’t make any difference.

Did I mention that I have always loved to eat? If you own a restaurant that features all-you-can-eat Chinese food, sushi, crab legs, or ribs, I am not the guy you want to see walking in your door on a Friday night. The pyramid of bones or broken shells left on the table when I am finished — at last — will look like the ruins of some ancient civilization.

Over the years, I have put on more and more weight, but I have also exercised — at least intermittently — figuring that as long as my chest was bigger than my waist and I could jog around the lake without collapsing, I was more or less in decent shape. That health plan, it turns out, is not as a sound as it might first appear.

After I fetched the depressing news from Google, I made a doctor’s appointment. When the results from my blood panel came back, I discovered that my blood was about 75 percent maple syrup. In fact, all of the numbers were alarmingly high. The doctor prescribed some medication and informed me that I would need to start monitoring my blood sugar on a daily basis, which meant pricking my finger every morning.

I was also referred to a dietician, an impossibly cheerful and vibrant young lady who patiently explained that my new diet would need to be radically overhauled, if I wanted to recover my health and thrive. I said I did, and then practiced putting together a series of simulated 45-carbohydrate meals, which I would be allowed to eat every three hours.

“I know that does not look like very much meat,” she said, nodding at the tablespoon-sized portion of rubber salmon on my plate. “But look at how many leafy green vegetables you get!”

The good news is that I feel fantastic, the most energetic and clear-headed I have felt in years. My fingertips are like little pin cushions, but at least I can see them.

I just hope no one sees me lunching on sunflower seeds and arugula, takes pity, and offers to buy me a hamburger and a milkshake.