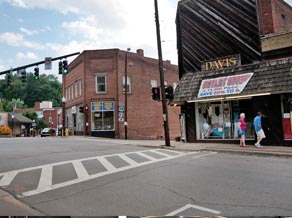 When Canton town officials were notified that the North Carolina Department of Transportation would be repaving all of Main Street starting in May, they knew it was the right time to complete some much-needed pedestrian improvement projects in downtown.

The quick timeline doesn’t leave much time for the town to plan for and execute the improvement projects, but Town Manager Seth Hendler-Voss said completing the projects before the DOT repaves the street will save the town money in the long run by preventing the need to tear up new pavement.

“As soon as (DOT) told us, we realized it was an opportunity for us to address some long-standing issues in downtown related to parking, pedestrians and speed,” he said. “It’s a prime opportunity to put together a design solution that could be implemented by staff crews.”

Hendler-Voss will be presenting conceptual plans for the proposed pedestrian safety, accessibility, drainage, traffic-calming and parking improvements at 5:30 p.m. Thursday, March 17, at Canton Town Hall. Members of the public, especially merchants and property owners downtown, are invited to provide feedback on the projects.

“We want to let everyone know what to expect with the proposed improvements and get input,” Hendler-Voss said. “Hopefully we can build consensus so we can start in next month.”

Hendler-Voss has spent the last couple of weeks meeting with downtown merchants and property owners to inform them about the improvements, as they will be impacted the most during the process.

Even though the Canton Board of Aldermen directed him to gather input from stakeholders prior to having a public input meeting about it, Hendler-Voss said the approved process got derailed somewhere along the way. Incorrect information about the project details started swirling around town and made it seem like the board wasn’t being forthcoming about it to the public.

Rumors around town made it back to the Feb. 25 Canton board meeting and resulted in what Alderwoman Carole Edwards described as a “nasty exchange” between the board members, the mayor and Hendler-Voss.

It started when downtown business owner Chuck Bates came before the board during public comment to ask for a public meeting to discuss the proposed Main Street improvements because several merchants were concerned that they had not been involved in the planning process.

Hendler-Voss hadn’t had a chance to talk to all the business owners and the board hadn’t even seen the preliminary plans yet.

Alderman Zeb Smathers said he felt rumors were only being spread around town to create unneeded controversy. He also questioned how people could be upset and concerned about a project that hadn’t even been shared with the board yet.

Mayor Mike Ray admitted that he went to town hall one day to ask about the project plans. While Hendler-Voss wasn’t in the office at the time, Assistant Town Manager Jason Burrell showed him the preliminary drawings. Ray also said during the meeting that he didn’t remember the board authorizing the manager to hire Vaughn Melton engineers to complete the conceptual drawings, but all the other board members confirmed that the board did authorize the action.

Feeling that Ray was the source of misunderstanding in the community, board members became visibly irritated with the entire situation.

Smathers banged his fist on the table and demanded that this “back biting” stop.

Hendler-Voss apologized for any misunderstandings in the community and assured everyone that the plan all along was to hold a public meeting to discuss the plans before anything was set in stone.

Alderman Ralph Hamlett asked merchants to come to the town manager if they had a question or concern about something instead of listening to rumors being spread around town.

The argument drew to a close with Smathers saying it was frustrating to see town progress constantly being met with blowback simply because one person — the mayor — is creating conflict when he doesn’t like something.

“Either you lead and do it morally correct with character, or you don’t do it at all,” Smathers said.

Edwards, who left the Feb. 25 meeting early and missed the argument over the sidewalk project, had a statement prepared for her board at the March 10 meeting. After listening to the audio recording of the meeting, she said she was disappointed in how the board handled the situation. She said the board should have addressed Bates’ questions and concerns without questioning where they originated.

“It definitely ended up being a circus, and I’m embarrassed and upset about what went on. I’m not sure how Mayor Ray kept his composure to go on with the meeting,” she said. “If that’s the way we’re going to act, I don’t want to be a part of it. I’ll stand up and walk out.”

Canton Board of Aldermen will hold a public input meeting for proposed downtown street and sidewalk improvements at 5:30 p.m. Thursday, March 17, at Canton Town Hall on 58 Park Street.

Conceptual plans will be presented for a series of proposed pedestrian safety, accessibility, drainage, traffic-calming and parking improvements in downtown Canton. Downtown property owners, merchants and the general public are encouraged to attend.