Numbers down at animal shelter, but space still doesn’t add up 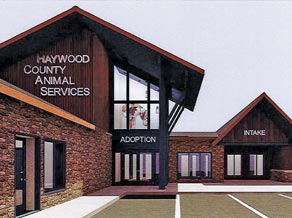 On paper, the case for a new, bigger Haywood County Animal Shelter is hard to justify.

That’s in large part due to the effort of animal rescue groups like Sarge’s, Haywood Spay and Neuter and FUR, which aggressively market pets for adoption and have supported neutering to reduce unwanted litters and strays.

But the numbers don’t tell the whole story, according to Doyle Teague, animal services director for Haywood County.

“People look at the numbers and say you used to take in a lot more. But we used to euthanize a lot more then, too,” Teague said.

In 2004, the county euthanized 2,500 animals — 70 percent of the dogs and cats that came into the shelter didn’t leave alive. Last year, that number was down to 264, a euthanasia rate of only 12 percent.

“We have come a long way,” Teague said. “Now we are able to keep them longer and try to find a different outcome.”

Still, the numbers could be even better with a new animal shelter. Even today, dogs and cats are euthanized that could potentially be adopted but have to be put down because there’s not enough space to keep them.

Another major problem is the lack of quarantine areas.

Last fall, when a contagious respiratory disease broke out among cats at the shelter, Teague enlisted a friend who let him set up a makeshift shelter in his garage.

“I didn’t have anywhere to put them while I gave them antibiotics for seven days without putting everybody else in the shelter at risk,” Teague said.

But other times, sick animals have to be put down rather than allowed to recover, because there’s nowhere to keep them isolated from the general population.

“We had some we had to put down because everything in the shelter would have been exposed,” Teague said. “I am just looking for smarter space where I can isolate and quarantine.”

Dr. Kristen Hammett, a veterinarian with Waynesville Animal Hospital and advocate for a new animal shelter, said that’s too often the only option shelter operators have.

“Our current way of dealing with respiratory diseases is euthanasia, and Haywood County can do better than that and should do,” Hammett said.

The animal shelter currently has 14 kennels for dogs, which is nowhere near enough to handle the shelter’s average daily population of 20 dogs, let alone fluctuating peaks. So the kennels are divided down the middle to create 28 cages, but that means dogs are using the bathroom in the same confined space where they eat and sleep.

“The runs are designed so you eat and sleep in one area and do the other stuff in another area, but now they are doing it in the same space,” said Randy Cunningham, architect with Mountain Designs that is designing the new shelter.

The new shelter will have 40 divided dog kennels.