Here to stay: Coyotes make themselves at home in WNC 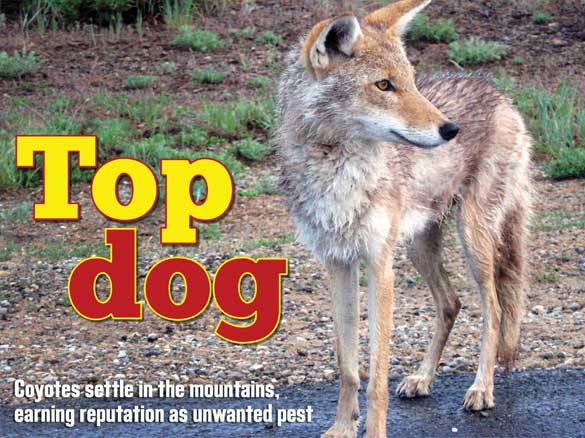 It’s been 30 years since Raymond Bunn saw his first coyote, and that moment — Clay County, 1986 — is not one he’s likely to forget.

“I remember well seeing it,” said Bunn, manager at Shed’s Hunting Supply in Sylva. “When I first seen it, I thought it was a German shepherd dog or something like that, but it was a coyote.”

These days, spotting one of the wild canines is no longer such a sentinel experience. They live in forests and backyards, mountainsides and commercial districts. They’re superbly adaptable, scraping out a living in big-city neighborhoods just as adeptly as in remote wilderness. They’re tough, and when it comes to dinnertime, they’re not picky.

“If opportunity arises, they’re going to eat anything that’s weaker than them,” Bunn said. “That’s what they do.”

That’s a reality that’s gotten coyotes in trouble with everyone from hunters to cattlemen to pet lovers since their eastward advance brought them to North Carolina for good in the 1980s. Hunters don’t like them because they kill game species like turkey and deer. Farmers don’t like them because they steal small livestock like calves and goats. And after the mysterious disappearance of a beloved cat or small dog, pet owners are apt to blame coyotes for their furry friend’s untimely demise.

Hyde, a turkey hunter, dislikes coyotes mainly because they’re “rough” on the turkey population. The 24-year-old Cherokee resident says he’s seen a dearth of the gobbling birds compared to his earlier days of hunting, and he blames coyotes.

Coyotes are also a common scapegoat when it comes to deer populations. Fawns, among a wide diversity of other foods, are part of the coyote’s diet, and many hunters will say the canines have played a role in the continued scarcity of deer sightings in Western North Carolina.

“Coyotes is killing the deer population,” concurred Gary Burch, of Clyde, at the same meeting.

Coyotes do eat game animals, but the truth of their impact on the population is a bit more subtle than that, said the Wildlife Commission’s district biologist Justin McVey. For the most part, coyotes subsist on rodents and small mammals, but they’ll eat everything from grasshoppers to blackberries to goats to scavenged carrion. McVey studied coyotes as part of his master’s thesis, and he can attest that it’s quite impossible, when dissecting coyote scat, to figure out whether those deer hairs came from a deer the coyote had killed or one it found already dead. They eat both.

If you want a scapegoat to blame for fewer deer and turkey sightings over the years, he said, coyotes probably aren’t the best one.

“With our deer population in Western North Carolina, it’s more related to habitat than anything else,” he said. “We have so much national forest out here that is in a mature state, that doesn’t really bode well for deer. If we could get more early successional habitat in our state, our deer population would benefit greatly.”

Taking a look at metrics over the past five years such as number of hunters, number of animals harvested and the likelihood of harvesting an animal on any given day of hunting — as reported by the Wildlife Commission — there appears to be no real correlation between the coyote harvest and hunters’ luck with deer and turkey.

Besides, McVey said, coyotes are “kind of lazy.” They may eat an occasional house cat or calf, but they don’t target them. Most of the time, there are easier meals, and because they don’t work in packs like wolves do, they’re out when it comes to large prey like adult deer and cows.

But where coyotes are concerned, anecdotes abound.

“A lot of people say they don’t kill grown deer, and I remember a few years ago Lake Logan was froze and they run a full-grown deer out on the ice and killed it,” said Mark Rogers, a member of the WNC Sportsman’s Club, which holds an annual coyote hunting contest. “They ripped its guts out, was eating it alive.”

In the world of agriculture, coyotes can have a substantial financial impact. A newborn calf is worth somewhere in the $200 to $300 range, said Jackson-Swain Extension Director Rob Hawk, while an older calf might go for $500 or $600. Lose a few of those, and the impact adds up quick.

“There is a monetary loss, especially with a calf,” Hawk said, an effect amplified by the small herd size — usually 20 to 30 head of cattle — most area cattlemen keep.

That said, Hawk gets “almost no” calls about coyote issues. Landowners call him out for help with black bears, skunks, beavers — all kinds of wildlife — but not really coyotes. That doesn’t mean the animals don’t present a challenge for farmers, however. In the last three years, Whittier area cattleman Joe Ward has lost four calves to coyotes. Or, to what he assumes are coyotes. They’re sneaky and hard to spot.

But the sneakiness is a trademark in itself. Ward’s been taking care of cattle for a long time, and he knows what to look for.

Those calves were on track to grow into cattle that would sell for more than $1,000, so the coyote’s meal represents a significant loss. Ward’s tried a few different tactics to keep his cattle safe — donkeys, llamas, a guard dog — but it hasn’t seemed to work. Now, his attitude is simply “whatever happens, happens.”

Calves aren’t the only animals on a farm or piece of property that coyotes will snack on. Any smaller livestock is fair game, as well as small dogs and cats. Coyotes are pretty good at doing all the things guaranteed to make enemies fast.

“They are a good-looking animal, especially ones that’s healthy, but when they start eating people’s house cats and eating their dogs, after a while people don’t think they’s so cute anymore,” Bunn said.

When you ask around about coyotes, the tenor of the conversation is nearly always negative. But with the animals being a relatively new addition to North Carolina’s wildlife community, much is still unknown about how they interact and fit in among their wild neighbors.

For example, it pays to point out that having a large, canine predator is not a new thing for North Carolina. Wolves used to roam the Appalachians, hunting prey as big and bigger than what coyotes take down. So, while coyotes certainly do plenty to make themselves unpopular, could it be argued that they’re simply filling a vacant ecological role?

Joe Yarkovich, wildlife biologist for the Great Smoky Mountains National Park, agrees with that assessment. Unlike the Wildlife Commission, which considers coyotes to be an invasive species and places no restrictions on when and how they may be hunted — except for five counties in eastern North Carolina where reintroduced red wolves are often mistaken for coyotes at nighttime — the park considers them to have arrived naturally and thus treats them just like any other protected animal in its boundaries. The park doesn’t do any outright coyote management but also doesn’t have any kind of population control program.

Coyotes certainly have a role to play in the balance of life in the forest, Yarkovich said. For instance, they help keep the wild hogs — an unwelcome invasive — in check by killing some of the piglets each year, a service that native animals like bears and bobcats perform as well. Of course, he added, they take out native species too, but that’s how nature works.

“I understand some of the impacts they have and I’m not saying they’re necessarily beneficial to have out there, but they’re pretty interesting animals,” Yarkovich said. “They’re survivors.”

McVey, too, is fully aware of both sides of the coyote coin.

“I’m really kind of on the fence with the coyote thing, whether it’s a good, bad, or indifferent thing,” McVey said. “I think it probably depends on the area and the prey base.”

For Ben Prater, regional director for Defenders of Wildlife, it’s a question that simply needs more information to develop an answer. Western North Carolina is still only about three decades into playing host to coyotes, and there’s plenty more to learn about how the animals use their environment and interact with their neighbors — human and not.

“I think we need to understand more about the coyote’s ecology in this new situation, this new environment, this habitat, and then decide what the goal’s going to be,” Prater said.

As it stands now, nobody even knows how many coyotes there are in North Carolina. Nobody — not the Wildlife Commission, not the park, not the Eastern Band of Cherokee Indians — conducts any kind of population estimate for coyote. Reports of how many there are, how healthy they appear and where the pockets of population are highest are purely anecdotal.

Though nobody’s much worried about the population’s fragility. Coyotes are tough, opportunistic, fast-reproducing and adaptable. According to pretty much anybody you ask, they’re not going anywhere.

“They’re survivors,” Bunn said, “and everybody might as well get to where they enjoy seeing them, because they’re here to stay.”

Coyotes aren’t from around these parts, though to look at how easily they’ve carved out a niche in Western North Carolina, it might be easy to believe otherwise.

The first one arrived in North Carolina as a captive in 1933, sent to Mecklenberg County to be used in training for fox hunting dogs, but it wasn’t until the 1980s that the animals began to appear entrenched in North Carolina’s natural landscape.

Native to the prairies and deserts of Mexico and central North America, coyotes now live throughout the United States, Mexico, in much of Canada — and in all 100 North Carolina counties.

For the most part, they’re not welcome.

In North Carolina, coyotes are given no protection, deemed non-native invasives that can be shot with any weapon in any season at any time of day or night in all but five counties, clustered in the eastern part of the state. The Eastern Band of Cherokee Indians even has a bounty on them, paying tribal members $25 apiece to turn in a coyote carcass — the tribe allows shooting only, no trapping, but it’s still an open season.

The only place where coyotes get a little protection is in the Great Smoky Mountains National Park, where their spread is considered a “natural migration.”

“They’re kind of in a gray area in that humans likely had a hand in spreading them all over the country, but because it’s considered natural spreading, we just manage them as a natural part of the ecosystem,” explained Joe Yarkovich, a park biologist.

The park doesn’t do any kind of active management with coyotes or track their population levels. The only time park officials get involved with coyotes is when one becomes a nuisance, looting campgrounds for food. Those coyotes usually have to put down, but it doesn’t happen often, maybe once every two or three years, Yarkovich said.

But just because you don’t see them doesn’t mean they’re not there — in force. Smart, adaptive and prolific, coyotes thrive everywhere from big city alleys to remote forestland, with a diet made up of whatever is there to eat.