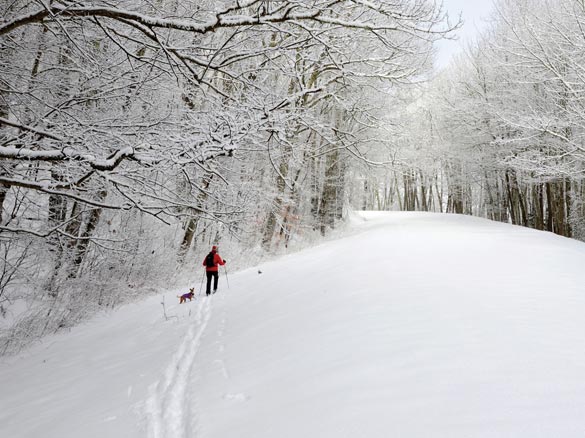 When the snow starts falling and Western North Carolina’s main streets, schools and businesses go to sleep in wait for warmer weather, there’s a select group of mountain residents who see the blanketed roads as an invitation rather than as an inhibition.

They’re the cross-country skiers of Western North Carolina, and they’re not afraid of the cold.

Hawk first picked up cross-country skiing as a high schooler in east Tennessee. An odd hobby for someone growing up far south of the alpine areas where the sport is most popular, perhaps, but when he first saw it done while watching the Winter Olympics in the 1980s, he knew immediately it was something he wanted to try.

“I thought, ‘I love snow and I love winter, and that just looks like something I’d want to do,’” Hawk recalled. So, he bought himself a pair of skis and set out with a friend to reach the top of Clingman’s Dome Road. The photo he took from the top earned him a prize package from Southern Living Magazine.

When Hawk moved to Indiana as an adult, plenty more opportunity to cross-country ski presented itself, and since moving to North Carolina in 1997, he’s made it a point to seek out opportunity. Many ways down the mountain: Adaptive ski program opens doors at Cataloochee

The sky is a flawless, cloudless blue over Cataloochee Ski Area as Mark Brogan, 37, suits… 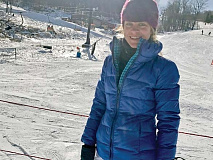 Lessons learned on the black diamond 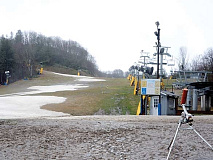 “It’s kind of like surfing,” he said — you have to go where the snow is.

For Waynesville resident Greg Kidd, that quest for snow has been something of a frustration since settling in North Carolina after exploring Upstate New York and Washington State on cross-country skis.

“That’s been one of the biggest frustrations I’ve had in the typical winters down here is that the snow is so unpredictable,” he said. Unlike in more northern climes, snow tends to melt pretty quickly once it’s fallen, so with each snowstorm there’s a short window of time to get out and enjoy it. Cross-country skiing in the Smokies is a carpe diem kind of affair.

“You have to get out and take advantage of it immediately,” Kidd said.

Kidd and his wife Susan Sachs make it a point to ski down the little-plowed road where they live every time the snow falls. They also like to make tracks at the Purchase Knob area of the Great Smoky Mountains National Park and, like the vast majority of cross-country skiers in the area, name the section of the Blue Ridge Parkway that juts toward Cherokee from Soco Gap as a favorite.

“It’s like an ideal place to ski,” Kidd said. “It’s not uncommon at all that when we skied up on the Parkway we’ve been the only people around.”

It’s hard to beat those wide, scenic road-cuts for ease of wayfinding, or the snow-covered trees and whitewashed views for beauty. And when you’re standing alone in the midst of a cream-covered wilderness, silent but for the sound of flakes falling on an already-thick blanket of snow and looking out on million-dollar views reserved, today only, for you alone, it’s easy to see why cross-country skiing is something Smokies residents still pursue, no matter how ephemeral the thrill.

“I like just moving through the snow on my own power and breaking my own trail. I like the feeling,” Hawk said. “It’s hard to explain.”

It’s the strength of that feeling that propels Hawk to log more skiing miles than, potentially, anyone else in the area. He’ll drive a couple of hours to ski a couple of hours, venturing as far as the Roan Highlands and Virginia’s Mount Rogers National Recreation Area to make tracks. But there’s plenty of opportunity closer to home, too, more than a lot of people would guess.

“You just kind of have to know how the snow falls,” he said.

There’s been winters he’s logged 300 miles on skis, one year when he skied every day in March on Clingman’s Dome Road — in good snow, at that. Those thin pieces of fiberglass are the perfect ticket to get out of the house and beat the winter doldrums. Even when the mercury shrinks down to 30, 20, even 10 degrees, cross-country skiing can make the outdoors a comfortable place to be.

“You’ll warm up in no time on skis and stay perfectly comfortable, even in very cold weather,” Kidd said.

Obviously, the warmth comes from working hard, making the slog up the long uphill grades that are part and parcel with the mountains. But it’s not such a chore as that description might make it sound. And the payoff at the end is pretty good.

“You still get a nice ride when you get to go downhill, but you earn it because you went uphill. There no free lunch,” Hawk said. “It’s that self-reliance and self-dependence, independence you get to experience.”

And while the backcountry is usually pretty deserted in the wintertime, it’s not always completely solitary. The number of cross-country skiers in Western North Carolina is small, but passionate. They tend to know each other, bumping into each other along the same trails and roads year after year.

“They’re like hikers — just people that like to be out in nature,” Hawk said. “It’s a small group that you see every year up on the Parkway.”

But the invitation is always open for more to come into the fold.

“There’s plenty of room out there for more skiers,” Kidd said.

Give it a try

While downhill skiing opportunities are heavily advertised and designed to get beginners set up with all the tools they’ll need to get started, aspiring cross-country skiers have to work a little harder. Though it’s possible to buy equipment in Asheville, the closest place to rent is the Pineola Inn and Country Store, just east of Grandfather Mountain State Park.

But for those with an interest, it’s a worthy investment, as the skis can last for decades. Here’s a rundown of some of the best places to cross-country ski in Western North Carolina:

For those willing to drive, Mount Rogers National Recreation Area and Grayson Highlands State Park in Virginia often have snow, and the Roan Mountain offers opportunity as well.