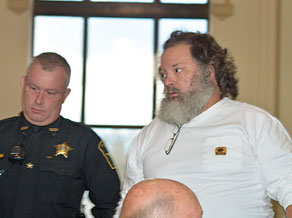 A public hearing on an outdoor shooting range moratorium in Haywood County got off to a dicey start this week.

A man speaking out of turn from the audience refused to pipe down and had to be removed from the meeting by deputies following a brief standoff.

The man tried to pose questions to a speaker at the microphone, but was told by Commissioner Mark Swanger that back-and-forth between the audience and the public hearing speakers wasn’t allowed.

The man shot back defiantly that he could ask questions if he wanted to.

By now, two deputies in the meeting had begun to walk toward the man. It was somewhat awkward for them to maneuver down the long rows of courtroom benches to where he was sitting, but after sidestepping around other audience members, they sidled in and flanked him on both sides.

The deputies asked him to leave the room, but he refused to go.

The deputies kept repeating their instructions to Knight to stand up and come with them.

“It’s going to take more than two of you,” Knight said, with his arms folded across his chest, refusing to budge.

Knight told them they’d have to carry him out, and they’d better call in more help to do that. Indeed, Knight is a large man, and extracting him by force from the hemmed-in row of benches would have been tricky.

The deputies kept asking, however, and Knight finally acquiesced, though he protested vocally on his way down the aisle that it wasn’t fair to be denied his chance to speak at the hearing.

Several minutes later, one of the deputies came back in and walked up to the commissioners’ table at the front of the room. He leaned in and spoke quietly to Commissioner Mark Swanger. After listening a moment, Swanger announced to the audience that the man was going to come back in if that was OK with everyone, now that he understood the ground rules for the hearing.

When Knight took his turn at the podium to speak, he was humble about the disruption he caused.

“Let me apologize to everybody for my outburst. I didn’t meant for it to be an outburst but I apologize for it,” Knight said. Knight said he was in favor of an outdoor shooting range because it would contribute to the economy and jobs. 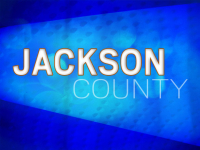 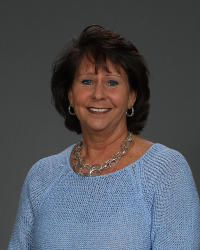