Beat you to the bottom: Race night offers competition and community at Cataloochee 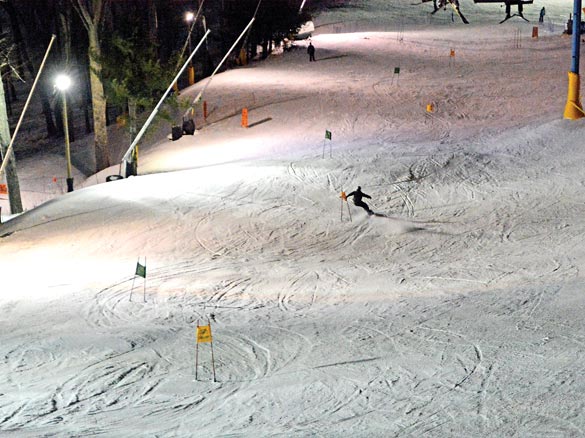 As the sun goes down on the snow-covered mountain at Cataloochee Ski Area, anticipation spikes among the enlightened few who know what Thursday night on the slopes means.

Darkness falls over Maggie Valley, and ski race director Mark DeWolf heads out with his crew to set up gates, fences, start and finish lines. Meanwhile, the racers arrive, hitting the lifts to make a few careening runs down the mountain before 7 p.m. rolls around. As the countdown draws nearer, DeWolf scrambles to make sure the timer’s set up and calibrated, the volunteers in place and the racers’ signup sheets collected. He plugs all the information on those sheets into the computer, ready for pairing with the new times about to be logged.

Finally, the course is ready.

“You got a racer in the block?” DeWolf radios out to his colleague Rich Mead, who’s monitoring the start.

The racer shoots down the mountain, weaving between yellow and green gates, kicking up clouds of powder as he hits the curves.

Racer 248, otherwise known as Tom Applebee, has been making the weekly drive over from his home in the Bat Cave area of Henderson County for the past two years. A skier since age 11, the 55-year-old said he settled on racing as a way to stay healthy during the winter. But with a competitive edge.

“Each time I get a medal, usually a bronze or a silver,” he said. “I’m trying to get the gold medal.”

You don’t get trophies and prizes for going to the gym, no matter how many calories you burn. Race night is an excuse get outside and hit the slopes — while also engaging in a bit of healthy competition.

According to Kelly Myhan, an Atlanta resident who’s been making the trek to Thursday night races for the past eight years, it’s gotten “really competitive” since he started coming. The core group of guys who turn out week after week has steadily improved its skills over the years, and the level of competition has heightened.

But at the same time, there’s a laid-back air to the evening. When asked for his best time, Myhan could only say, “Oh, I have no idea.”

“We’re all just speed junkies,” DeWolf said, kids at heart looking for any excuse to high-tail it down a mountain as fast as possible. The Waynesville resident usually takes a break from his official duties to make a couple race runs himself, though on this particular evening — Jan. 24 — a nasty bug had taken out too many of his staff for him to get on the slopes.

Carrie Edwards, of Asheville, puts the fun-to-competition ratio at 70-30. She mostly shows up just because skiing is her favorite thing to do and race night is an excuse to get her friends together for an infusion of weeknight skiing.

“I get competitive with myself,” she said, “but mostly it’s fun.”

The winners in each category, stratified by age, gender and type of run — both snowboarders and skiers are welcome to participate —  do get prizes. They’re provided by Budweiser, items that Asheville resident John “Ozzie” Oswald categorizes as “silly schwag.” Baseball caps, neon Budweiser signs, coolers, beer tents.

Oswald usually does pretty well in the races — this time he came out with the second-fastest time overall, the fastest in his age bracket — so he’s got a fair amount of that stuff at home already.

“What’s going to happen is his wife’s going to get tired of all the stuff he’s bringing home and he’ll have to throw a few races,” joked Doug MacMillan, also of Asheville.

It’s that kind of back-and-forth that keeps Hendersonville resident Joe Crowell coming back.

“You get to see the same guys, talk a little smack. There’s a whole lot of camaraderie,” he said.

Race night is essentially a juxtaposition of the individual and the communal. The race itself is individual. One skier down the mountain at a time, two shots per person to get the best time possible. You never really know what your time is until all the runs are over and everyone’s back at the bar waiting for results.

“We’re really racing against the top guy in the country,” DeWolf said.

Ted Ligety, widely recognized as the fastest skier in the U.S., sets the pace for how competitive skiers are ranked. Though Cataloochee’s Thursday night races are pretty laid-back, they’re also part of NASTAR, which stands for NAtional STAndard Race. Based on their performance at Cataloochee, racers are given a handicap that’s gauged, ultimately, by how their times compare to Ligety’s. The smaller the number, the faster the skier.

“Then you can compare yourself to people at resorts across the country,” DeWolf explained. You can even aim toward making the NASTAR nationals, which this year will be held in Steamboat, Colorado.

The racers like having that bit of an official dimension to their performance. But it’s not just about the slopes. After the race course is dismantled, the lifts rattle to a stop and the nighttime winds hurl chill at the mountainside, the crew is still there, sipping the last of their beers, finishing their fries and admiring this week’s take of “silly schwag.”

The real draw of race night, said John Menkes, sweeping his hand to indicate the faces at the table around him, is simple.

Plenty of opportunity for adrenaline junkies

Ski and snowboard racing is far from a Thursday-night-only endeavor at Cataloochee Ski Area.

During January and February, middle-schoolers race on Tuesdays, high-schoolers on Wednesdays and adults 18 and over on Thursdays. Sunday afternoons are open to everyone.

“Hardcore skiers love to race,” said racing coordinator Mark DeWolf. “I’ve been skiing all over the country, and even when I was a kid I’d see these NASTAR races and I’d want to do it.”

Usually, Thursday nights attract somewhere between 20 and 30 competitors, but the middle and high school races are much bigger, often bringing 150 kids on each of the two nights. Each one makes two runs, meaning a total of 600 timed runs down the Alley Cat slope between the two weekly school team races. While a top-notch racer can complete the run in as little as 13 seconds, for kids just getting into the sport it can take as long as 90 seconds.

It can be chaotic, but the high participation is exciting, DeWolf said. Another generation of powder junkies is on the rise.

“We give this stuff to the kids,” DeWolf said. “What it does for the mountain is make lifelong skiers out of them.”

The competitive season is already underway for the middle and high school teams, but the Thursday and Sunday competitions are drop-in friendly.

On Thursdays, races go from 7 to 8:30 p.m., with an entrance fee of $15 or a combined fee for lift and racing of $35. Sunday races are held from 11 a.m. to 2 p.m., with registration beginning at 10 a.m. The fee is $7 or $5 for racers 12 and under. While no prizes are given on Sundays, the times do count toward qualification for the annual NASTAR championships.