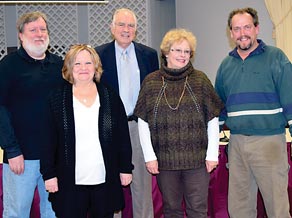 After interviewing seven people Monday night, the Maggie Valley Board of Aldermen unanimously chose Clayton Davis to fill a two-year unexpired term on the board.

The seat was left vacant when former alderwoman Saralyn Price was elected as mayor in November. The town put a call out for applicants and received 10 applications, but two of the applicants didn’t qualify. Robert Bradley, a longtime gunfighter at Ghost Town in the Sky, was disqualified because he doesn’t technically live in the town corporate limits.

Jasay Ketchum, who ran against Price for mayor, was disqualified because he turned his application in after the set deadline. While the board acknowledged Ketchum did have a family emergency during that time, they agreed he had plenty of time to turn it in before that emergency occurred.

Since the board has had problems in the past with internal bickering among board members, the aldermen wanted to ensure whomever they chose could work well with others and resolve conflict in a productive way. All the candidates said they were good listeners and willing to compromise, but Davis was perhaps a bit more honest in his response.

“I’m a team player, but if I know deep down I’m right, I think I owe it to the community to state my position,” he said.

After asking each candidate a series of questions, the board voted on its top three choices, which were Davis, Pendley and Moody. Aldermen had discussed waiting for another week or so before making a final decision, but the choice seemed pretty clear to them Monday night.

Alderman Mike Eveland made a motion to appoint Davis to the board and it was approved with a 4-0 vote.

“I think he represents the community at large — he probably knows the people around here as well as he knows the names of all those trees and plants and that’s important,” Eveland said.” He doesn’t seem to have an axe to grind and would be a great addition to the board.”

Davis has been a resident of Maggie Valley for 50 years and worked for the Department of Agriculture before serving as a Cooperative Extension agent in Haywood County for 15 years until his retirement. Not one to toot his own horn, the board had to do a bit of prodding to get Davis to explain why he would be the best candidate for the job.

Originally from Swain County, Davis said he has a deep understanding of mountain culture. He also used his horticulture experience several years ago to assist with Maggie Valley’s beautification efforts.

“When you’ve been exposed to as much stuff as I have, I should have learned something along the way,” he said.

Davis still thinks much can be done to improve the aesthetic value of the valley, including planting more trees and shrubbery that will show beautiful colors in the fall and spring seasons.

“It could really brighten town up more and make it more attractive for tourists,” he said. “It won’t happen overnight but it’s a long-term thing.”

Mayor Price thanked all the applicants for their interest in being a leader in Maggie Valley and encouraged all of them to stay involved through attending meetings and joining one of the other town committees.

“Don’t just stop here — we have plenty of boards and would love for you all to be involved in the town in some way,” she said.

Davis will be officially sworn in at the town’s next board meeting, which will be held at 6 p.m. Feb. 8 at town hall.