To hunt or not to hunt: Elk season proposal debated at public hearing 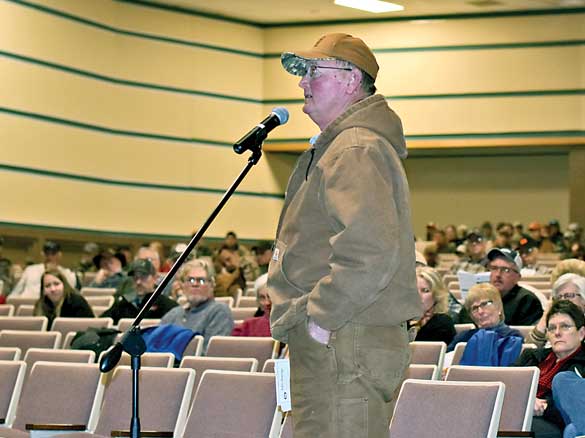 Should North Carolina start thinking about a hunting season for elk?

If the crowd that turned out to the N.C. Wildlife Resources Commission’s public hearing last week is any indication, it depends who you ask. Farmers, hunters, biologists, wildlife enthusiasts and everyone in between filled the seats at Haywood Community College’s auditorium, waiting for the chance to give their two cents on the Wildlife Commission’s proposal to pave the way for an elk hunting season in the future.

Before comment began, Brad Howard — the Wildlife Commission’s private lands program coordinator — emphasized the “pave the way” portion, stressing that the proposal would simply “establish the legal framework” for a hunt, not launch one before the elk herd was biologically ready.

Fifteen years after the 2001 release of an experimental elk herd of 52 animals in the Great Smoky Mountains National Park, the population has multiplied to somewhere between 150 and 200 elk — the Wildlife Commission is thinking that the day when the herd can sustain a limited hunt may not be far off. So, in this year’s set of rule changes they’re proposing to lay the groundwork for a season to start once staff biologists give the OK. Basically, the proposal takes elk off the state’s list of species of special concern and lays out parameters for a one-month, permit-only season in October.

The idea has drawn ire, hurrahs and everything in between.

For some, the proposed hunting season is a victory for an animal that’s only recently returned from more than 200 years of absence from the Smokies. The fact that the herd is doing well enough to even begin the conversation, the reasoning goes, is a big win.

“I never thought I’d say I support a hunt, but I do support this proposal with the understanding there is more time to be spent on counting how many we have, where they are — and more details, please,” said Cherokee resident Joyce Cooper, a member of the Rocky Mountain Elk Foundation.

“Hunting is conservation,” concurred David Allen, CEO of the RMEF, in a letter read by Kim DeLozier, a former park biologist who was instrumental in the reintroduction.

These commenters expressed their faith in the Wildlife Commission’s “highly successful wildlife management program,” as Allen termed it, giving a vote of confidence that the agency wouldn’t hand out a single permit until the herd could handle the pressure.

At the other end of the spectrum were those who said hunting elk is a bad idea, period.

“This seems to be history repeating itself if we do not allow these creatures to roam free without fear of being hunted,” said Haywood County resident Sarah Wendell, referencing unfettered hunting’s role in the species’ initial extermination in the East in the 1700s.

Wendell cited her experience monitoring bison herds in Yellowstone National Park, which is also home to elk, telling the commission that hunting would cause a domino effect of stress and disruption.

“Knowing that some hunters go for the big and the best, that is going to affect the health of the herd to have people go for the healthy ones, so I am opposed to this elk hunt,” said Henderson County resident Grace Shun, expressing concern with a hunting season that would overlap with breeding.

In a follow-up interview, Wildlife Commission district biologist Justin McVey said the October season was scheduled to start after most breeding was over but before it was completely finished. The idea is to harvest bulls after they’re likely to have finished mating but before the increased activity and vocalization that characterizes mating season is completely over.

A question of timing

Many people came down somewhere in the middle, lending cautious support to the idea of a future hunt but questioning the commission’s timing.

Wildlife Commission staff are quick to point out that the proposal, if approved, wouldn’t make permits automatically available. It could be two, five, 10 years before the first permit was handed out, and initially the number of permits available would be quite small, in the single digits.

“It was just giving us the legal framework, and at some point in the future (we could) issue permits if we think it’s biologically appropriate,” McVey said.

But the proposal would give the Wildlife Commission staff the authority to approve a season internally whenever it saw fit, without necessarily holding another public hearing. For some, amending the rules now seems a bit like jumping the gun.

“We would like to see more biological effort to identify and be really clear the population can sustain a hunt. As it is right now, we are against it,” said Tommy Cabe, forest resource specialist for the Eastern Band of Cherokee Indians, speaking for the tribe. Because the same elk move between state, National Park and tribal land, he added, the EBCI would like to have “all biologists, including ourselves, in agreement” before a hunt began.

“The herd is growing nicely, but I don’t think we need to jump into hunting quite so quickly as it seems to be everybody wants to run into it,” agreed Haywood resident David Feldman.

Not everyone at the meeting looked at the issue from a simple population resilience perspective, however. For many people living in areas where elk like to roam — especially those running agricultural operations — the animals are more than just resurrected novelties. They’re bona fide pests, causing unsustainable damage to agricultural livelihoods.

“I think they need to be eradicated out of here,” said Brad Rich. “They push all our animals out. They destroy our land. It’s ridiculous.”

Others suggested a less drastic solution but maintained that the problem is real and demands a response.

“I love the elk and all animals, but whenever you have a biologist’s number on your phone on speed dial because of all the problems, there is a problem,” said White Oak resident Brooke Parrott.

She and McVey have long been on first-name terms, because the elk are always in her yard and impossible to scare away. She’s had one dog stomped to death by an elk, and another that had his eye kicked out. Elk are constantly tearing down the fences around the horse pasture, and Parrott’s constantly worrying the livestock will escape through the broken fences. Both livestock and fences are expensive to replace.

“I would be in huge support of a way to control these animals, whether it be by fence or by hunt or by getting rid of them altogether,” said Ronnie Ross, who lives in the Jonathan Creek area. Plenty of people love to come and watch the elk, take pictures and all that, “but they are a significant problem for the people who live next to the park and have to deal with them every day,” Ross said.

He’s had to reseed his pastures and fix his fences when the elk come through. Elk chase his cows around the pasture, stressing and frightening them. And the state doesn’t do anything to help farmers recoup those costs.

“I would be in favor of the hunt to a large degree,” Ross concluded.

But perhaps the toll on farmers wouldn’t be so large if public lands boasted better habitat for elk in the first place, others said. Elk were initially released on national park lands, which are full of old growth forest but light on grassy fields for elk to munch.

“The elk like grazing land. So we got a problem,” said Donald Smart, president of the Haywood County Farm Bureau. With 30 percent of Haywood County’s area owned by the government, he continued, there’s no reason it can’t be managed to provide the habitat elk need, but something has to change.

“I think we are amiss after many years of not following through with the proposals to take better care of our forests,” said Ramona Bryson, a Rocky Mountain Elk Foundation member who lives in Mills River. “We need better habitat.”

The Wildlife Commission is on its way toward meeting that mandate, with a land conservation project by The Conservation Fund poised to convey 2.7 square miles of land abutting the Great Smoky Mountains National Park near Maggie Valley to the Wildlife Commission by the year’s end. The land would be managed as wildlife habitat, especially for elk, as the main herd is based in nearby Cataloochee Valley. Management techniques such as timber cuts and prescribed burns could be used to create the young forest habitat that is in low supply in Western North Carolina.

But that won’t necessarily solve the problem for farmers, Smart pointed out.

“It wouldn’t matter how large a habitat you had for those elk,” he said. “They’re going to wander. They’re grazing animals. Pick out how much land you want, put a high fence around it, let them graze. Feed them like a farmer.”

The Wildlife Commission won’t be doing that, McVey said. But having a dedicated management area for elk would serve as a home base for the population, supporting a main herd — and in turn, making hunting on the private land where they’re not welcome a lot more doable.

“When they’re starting to spill off, that would be the excess animals that could be harvested once we reach a level that would be sustainable,” he said.

Of course, right now there are a lot of “ifs.” There are still two public hearings to go further east in the state, finishing out the schedule of nine held this month. Then, Commission members will have to consider what they’ve heard and come to their meeting Feb. 10 ready to vote.

If it’s a no, hunting is off the table, at least for now. And if it’s a yes, hunting will likely still be off the table for the immediate future, the question resurrecting once Commission biologists decide the population’s ready to take the pressure.

“I do think there is going to be a point in the near future where it will make sense to issue some permits, so to go ahead and have that process in place so when the time is right it can be easily accomplished makes a lot of sense,” said Neal Hanks of Asheville, the Wildlife Commission’s representative from Western North Carolina.

What’s in the proposal?

The N.C. Wildlife Resources Commission’s list of proposed rule changes for 2016-17 contains a long list of proposals affecting everything from hunting to fishing to land management, but the five-line proposal dealing with elk is what’s getting all the attention this year.

The proposal would not:

Written comments can be sent through Jan. 25 to This email address is being protected from spambots. You need JavaScript enabled to view it. or 1701 Mail Service Center, Raleigh, N.C. 27699-1701.