Dr. Frank VanMiddlesworth is on a mission to bring free medical care to the uninsured in Swain County and improve the overall health of its residents.

He’s had the hope of opening a free clinic since his family moved to Bryson City 10 years ago and it’s finally coming to fruition. Swain County Caring Corner opens its doors for the first time Thursday, Jan 21, at Bryson City First United Methodist Church.

“There are annual statistics that evaluate every county in the nation. We were 94th out of 100 counties in North Carolina in terms of health,” VanMiddlesworth said. “We felt like we could feel sorry for ourselves or we could take the Christ paradoxical approach — when I am weak, then I am strong.”

After a year of planning and gathering up some committed volunteers, the group formed a Christian-based nonprofit that will operate similar to Good Samaritan clinics in Sylva and Waynesville. VanMiddlesworth has experience volunteering for Good Samaritan in Sylva and currently works in the emergency department at Swain Community Hospital.

VanMiddlesworth said residents have limited options when it comes to health care in Swain County. People without insurance can go the health department and pay $45 for a visit to receive basic preventive care or they can travel to Sylva or Waynesville to Good Samaritan if they qualify. Even for people with insurance, finding a primary physician in the area can be difficult.

“We’ve had some attrition. We’ve had really good doctors retire, two went to be medical missionaries in Papua, New Guinea, and others left to work at federally funded health clinics that see people on a sliding scale,” VanMiddlesworth said. 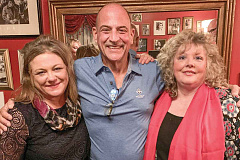 Besides providing for the poor and uninsured, VanMiddlesworth said the free clinic would be a benefit to the hospital as well. He said an informal survey he conducted while working at the hospital showed more than 25 percent of patients he saw in the emergency room were uninsured and didn’t have a primary physician.

A free clinic will hopefully cut down on the amount of people unnecessarily going to the ER. The hospital has agreed to donate lab work and referral services for the free clinic.

“People wait so long and then go to the ER and their condition is much worse than if they had gotten medicine early on from their primary doctor,” he said.

VanMiddlesworth and a few nurses are volunteering their time to make this free clinic work, but there are still expenses associated with running any kind of medical facility. The nonprofit clinic has received two small grants from the Great Smokies Health Foundation Thrift Store to purchase start-up equipment and computers. The church has donated the space, which includes four rooms, and the clinic has also received donations form the community.

“The biggest expenses — if we grow big enough — will be to hire a nurse practitioner or a nurse,” he said. “Volunteers are wonderful but there is something about having someone to provide continuity and accountability.”

VanMiddlesworth said the clinic’s volunteer board of directors went through the process of establishing a protocol for the clinic. Under the Federal Tort Claims Act, the employees of the clinic will be considered federal employees, which means the health care providers don’t have to carry malpractice insurance and the federal justice department will handle any malpractice cases. VanMiddlesworth said many free clinics operate under this model.

The clinic is located at Bryson City Methodist Church, 76 Main St., Bryson City. Call 828-341.1998 to see if you qualify for free medical services and to make an appointment.