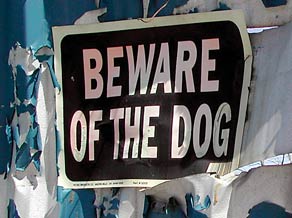 After conducting research and gathering public input for several months, an ad hoc committee finally has a working draft for what might be Swain County’s first animal control ordinance.

The 10-page draft document aims to protect public health and prevent the abuse, neglect or abandonment of companion animals. It also defines nuisance animals and outlines how the county should handle dog bites, dangerous dogs and vaccinations.

Most of it is common sense stuff, but this is the first time Swain County has gotten this close to putting an animal control ordinance in place.

Swain County is one of two counties in the state without any kind of animal control regulations, but Commissioner Ben Bushyhead took charge of the issue last spring. He said the lack of a facility was part of the problems that pushed this issue forward.

“The sheriff and the Bryson City chief of police came to us and said, ‘We need a facility for animals — we have to have it,’ so that was one thing that gave momentum to everything we are doing,” he said. “The second thing was not just feral cats and dogs but stray cats and dogs. People were dropping them off on the side of the road and they’ve begun colonizing and becoming destructive.”

It’s been a recurring issue for many years and the county has tried a number of short-term fixes that haven’t panned out. While funding for infrastructure and staff have been a challenge, animal control in general can be a controversial issue if government tries to tell people how to care for their own property.

One of the obstacles for Swain County has been trying to address the issue without putting too many restrictions on hunting dogs and farm animals, but this proposed ordinance exempts hunting dogs, livestock and even certified service or therapy dogs.

“One basic thing we (the committee) kept in front of us was that we can look at ideas from other counties but we have to keep in mind this is Swain County,” Bushyhead said. “I think that stayed in front and was discussed at almost every meeting.”

Bushyhead and committee chairwoman Sybil Mann have made it clear from the beginning of the process that the ordinance wasn’t meant to be a leash law or to address barking dogs. Nuisance is defined in the ordinance as “any animal that disturbs the comfort or safety of any inhabitant in the neighborhood or interferes with any person in the reasonable and comfortable enjoyment of life or property.”

The definition says animals making noise, aiding in or protecting livestock or crop production may not be designated as nuisance animals.

The regulations regarding rabies vaccinations are simply a reflection of state law, which requires all pets over 4 months old to be vaccinated by a licensed veterinarian.

Also mirroring state law, any animal that bites someone or shows symptoms of rabies shall be confined immediately and shall be reported to the Swain County Health Department. If the animal has been vaccinated, it will be quarantined at the animal shelter or veterinarian’s office for 10 days.

An animal found wandering stray or at large without a known owner, who has bitten a person or who shows symptoms of rabies, will be seized and impounded at the animal shelter where it will be held for 72 hours then evaluated. Pet owners would be responsible for paying a $5 a day quarantine fee plus the cost of a rabies vaccine and veterinarian treatment.

The proposed ordinance states that it will be unlawful for anyone to keep any dangerous or potentially dangerous dog in the county unless it is confined to a secure building or fully enclosed pen on the owner’s property. Wireless fencing doesn’t count as a full enclosure. A dog can be defined as dangerous if it has attacked people or other animals or has inflicted an injury to a person or another animal without being provoked. An animal services staff member can also deem a dog dangerous following an evaluation. Animal services may conduct an investigation and evaluation into a potentially dangerous dog following a written complaint from a resident.

Complaints of nuisance animals in the county must also be submitted in writing. Animal control officers won’t investigate a nuisance animal based only on anonymous complaints. Once an investigation is completed in writing, it will be turned over to the Animal Services Director. If action is warranted, the director will contact the animal’s owner and give the owner 48 hours to take corrective measures.

A first-time violation of the ordinance would come with a warning, a second offense has a $25 penalty, a third offense has a $50 penalty and a fourth offense comes with a $100 penalty plus restraint measure or seizure of the animal. If an assessed civil penalty is not paid within the time period prescribed, a civil action may be taken to recover the penalty and costs associated with collection of the penalty.

Even if the proposed ordinance passes, Swain County still lacks the staff and facilities to provide animal control services. The county doesn’t have an animal shelter like many other counties. Instead, stray animals are taken to PAWS, a nonprofit that runs a no-kill shelter in Bryson City. Even with the PAWS partnership, the no-kill shelter is often full and can’t keep up with the increasing demand.

The proposed ordinance would create an Animal Service Center that will be staffed with animal control officers and supervised by an animal services director. While these officers would not have the power to arrest or carry firearms, they would have the authority to issue violation notices and assess civil penalties for those violations.

Bushyhead said Swain County has to get moving on constructing an animal shelter as soon as possible, but he understands it will be a process trying to find the ideal location that won’t result in nuisance noise for other residents. Early in the animal control ordinance process, commissioners talked about possibly partnering with Jackson County to construct a new shelter that could be utilized by both counties, but Bushyhead said that might not be feasible at this point.

“In my opinion, it’s not feasible at this point because we need to get ours established now and if we can work out a partnership down the road that would be good,” he said. “And after talking with the county manager I believe we can absorb the cost of a facility and personnel right now.”

The ordinance would also create an Animal Services Advisory Committee that would be made up of five members appointed by the county commissioners.

Now that members of the public have something in writing to consider, Bushyhead said the ad hoc animal control committee will hold another round of public input meetings in different areas of the county in January. The ad hoc committee will meet on Feb. 4 to discuss any other last minute changes to the ordinance before the final draft is presented to commissioners for consideration at their Feb. 11 meeting. If commissioners choose to move forward with adopting a version of the ordinance, another official public hearing will have to be held before it is approved.

The following public meetings will be held at 7 p.m. regarding Swain County’s proposed animal control ordinance.

Pick up a copy of the proposed ordinance at the Swain County Administrative Building or call 828.488.9273 to request a copy.