Seven in running for Swain commission

Seven candidates will be vying for two commissioner seats in Swain County next year.

Swain incumbents David Monteith and Steve Moon, who are both Democrats, have signed up to run for re-election but will be challenged by two Republicans and three other Democrats.

Monteith, a 68-year-old retired market manager at Ingles who is now a Swain County school bus driver, is currently serving his fifth term as commissioner and says he wants to try for another term so he can see some current projects through to fruition.

Moon, a 64-year-old retired tire shop owner, has served as a county commissioner for 10 years and served as a school board member for six years before becoming a commissioner.

Bair, a 67-year-old retired fast food worker from Whittier, ran for commissioner in 2014 when all four commissioner seats were open. She was the lowest vote-getter out of six candidates. The 2014 election was the last year all commissioners were up for election at the same time, and now commissioners will serve staggered four-year terms. 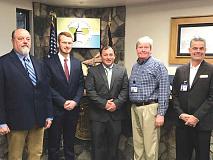 Gunter, a medical technician from Bryson City, ran for Swain County Commission chairman in 2006 but was defeated.

Dover, 41, ran for Swain County sheriff in 2010 but was defeated by Curtis Cochran. He served as a sheriff’ deputy for four years and also has experience as a detention officer, a patrol dispatcher and courtroom security for the U.S. Marshal Service.

Grant, a 43-year-old engineer, ran for commissioner in 2014 but didn’t garner enough votes to get one of the four open seats.

Anthony, 65, is a former commissioner who was last elected in 2006.

There will be a primary election for the four Democratic candidates on March 15, while the two Republican candidates will automatically move on to the general election in November.