Things that go peent! in the dark 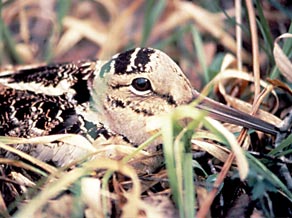 I think Lewis Carroll could have just as easily warned of the Timberdoodle as the Jubjub bird in the “Jabberwocky,” both could appear to be nonsensical avian entities. The timberdoodle, a.k.a. American woodcock, appears to be constructed from incongruous leftover avian parts.

You have to admit it’s a strange recipe for a shorebird from the family Scolopacidae, with its yellowlegs and sandpipers etc: take one pair of short robin legs, attach them to a thick, chunky partridge-like body with short round wings, no neck and a large head; next place a long bill on the head — it doesn’t matter if it’s broken because we’re gonna put a hinge at the tip; OK, all we have left for eyes are these large round black ones that look like they might be a better fit for a salamander or frog of some sort — we’ll just squeeze these in here, behind the bill — there’s enough room if we place them way up near the back (top) of the head. And voila, you have one of only seven shorebirds that commonly breed across the Old Home State.

I’ll let you sort out the Darwinian chicken or egg debate but throw in a little cryptic brown and black mottling and you wind up with an amazing creature that fits perfectly in its niche. The American woodcock is a year-round resident of North Carolina and one of those facultative migrants — meaning northern nesters (and woodcocks nest all the way north to southeastern Canada) generally move as far south as they have to in order to find favorable foraging conditions. Numbers often increase in North Carolina over the winter months.

Woodcocks like to nest in early successional woody habitat, mixed agriculture and woodland interfaces and in abandoned, brushy fields. It nests in shallow depressions on the forest floor relying on its cryptic coloration for protection. The young are out of the nest within a few hours of hatching and by four or five days are feeding themselves. Their habitat expands during migration to include marshes, bogs, wet fields and/or meadows.

Woodcocks feed on earthworms and other invertebrates they find by probing the soft soil with that long bill. They shuffle along, walking slowly rocking forwards and backwards doing a kind of dinosaur stomp with their short stiff legs. The vibrations cause the earthworms and other invertebrates to get antsy and move about giving away their whereabouts. And guess what? It’s fortunate for them their long bill hinges at the tip – that allows them to grasp their prey and drag it from beneath the ground. And what about those big ole eyes sitting way up high on the top of their head? They’re perfectly placed for keeping lookout for raptors and other predators as the bird is probing the earth, head-down, searching for its own meal.

Population trends and/or numbers for the American woodcock are hard to ascertain because of their secret, solitary nature. World wide they are listed as a species of “least concern,” however they were placed on the 2014 State of The Birds Watchlist and their population is believed to be declining especially in the mid-Atlantic and New England.

Woodcocks are early breeders and breeding season is the only time they can be found in any kind of numbers. Males and females congregate in wet areas generally adjacent woods. The male gives a loud mechanical peent, then bolts into the air on those short stiff wings climbing in arcs to a height of 200-300 feet. As he climbs and turns his wings give off a high-pitched whistling sound (kind of like a mourning dove but louder.) At the apex of his flight he turns and falls zig-zagging back to the ground, the wings still producing and intermittent whistle. It won’t be long till he’s ready to fly again. In a field with a dozen or so birds, it can be quite a spectacle.

These aerial displays occur in the predawn and/or evening twilight — sometimes even into the night during full moons. The best way to observe this whirling dervish display is find appropriate habitat — get a good vantage point and wait.

Displays have already begun in the Deep South and often begin in Western North Carolina by mid-January. Some places I’ve observed American woodcock in the area include Jackson Park in Hendersonville, Tessentee Bottomland Preserve in Macon County and Kituwah.