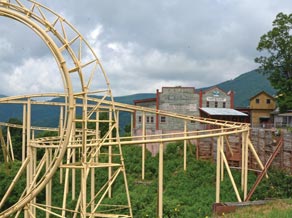 Alaska Presley has had plenty of good intentions and ideas for Ghost Town in the Sky since she bought the rundown amusement park out of foreclosure in 2012.

While she has been successful at getting the park back open, many of her big plans to resurrect the western theme park haven’t panned out due to one unexpected expense after another.

“It was in horrible shape when she bought it — a lot of work had to be done,” said Chris Chagnon, manager of Ghost Town. “The public hasn’t seen all the work that went into it and it’s been discouraging for Alaska to write check after check for repairs only for something else to go wrong. It can really bring you down.”

Presley admits she’s made some promises for the Maggie Valley attraction that she hasn’t been able to keep, but she says the latest plan to rebrand the mountain is different — this time she has more help.

“It’s no longer one lady running a 260-acre park — it’s dozens of people involved in their own little part of the business,” Chagnon said.

Chagnon, a local Realtor and business owner in Maggie Valley, has been working with Presley to rebrand and redevelop Ghost Town in the Sky into Ghost Town Village for the 2016 season. He says the old western town will be an Appalachian village when it opens June 1. After reviewing the finances, Presley said she knew something had to change in order to keep Ghost Town alive.

“After reviewing our options we decided to rebrand the park while also keeping the nostalgia of Ghost Town,” Chagnon said.

Ghost Town brought hundreds of thousands of people to Maggie Valley from the time it opened in the late 60s. But the park had fallen in such disrepair by the time Presley bought it that restoring the rides was out of the question.

Many people who had fond memories of Ghost Town have been disappointed to return in the last couple of years only to realize the park is a shell of what it used to be. While it’s impossible for Ghost Town to compete with places like Dollywood and Carowinds, Presley hopes to offer people a new kind of experience on Buck Mountain.

The A-frame gift shop on Soco Road will become more of an old-time country store with souvenirs, homemade jams and jellies and more. While chairlift tickets cost $25 the last several years, patrons will pay only $10 to take the 20-minute chairlift ride or the 15-minute bus ride up the mountain to the second level.

Chagnon said level two — where the children’s rides and the dilapidated rollercoaster are located — will now be known as Moonshine Holler. With a brand new arcade, children’s rides and a few adult carnival rides like a tilt-a-whirl and a Ferris wheel, Chagnon said the area would be just like an old timey county fair. He said a third party company out of Ohio would be leasing and operating Moonshine Holler.

The big question was what to do with the rollercoaster, but then a company out of South Carolina had a solution.

“They are going to be rebuilding the rollercoaster into a Mountain Airwalk,” Chagnon said.

The idea is to use the existing structure by turning it into an extreme sport obstacle course. Thrill seekers will be harnessed in before climbing their way to the top of the structure. Once they make it to the top of the second rollercoaster loop, they will either have to crawl all the way back down or do a gravity jump off of the structure. With the help of a magnetic vest and brand new technology, Chagnon said, it will be like bungee jumping without a chord.

“No one will be able to replicate this,” Chagnon said.

He said it’s such a new and exciting concept that the company offered to install the Airwalk for free if it could operate it and get a percentage of proceeds. He turned down their offer and Presley will pay for the project herself. He wouldn’t give an exact cost but said it was between a $100,000 to $400,000 investment. He said the Airwalk should be completed in March before the park’s rides are scheduled for state inspection.

All the restaurant and shop space will be leased out to vendors who will pay a small deposit on the space up front and pay a small percentage of their earnings to Ghost Town.

“That’s the beautiful thing about letting vendors do their own thing — it gives them more vested interested,” Presley said.

Joe Ford, who has played piano in the Ghost Town saloons for many years, will act as the entertainment director for the Appalachian Village. Each saloon will offer different live entertainment, whether it’s a bluegrass band or a clogging group.

Based on customer feedback, Chagnon said the gunfights and can-can dancer performances would continue. While the can-can girls will be part of the entertainment lineup, the gunfights will be changed somewhat to fit in with the Appalachian Village theme. Guests will pay a few extra dollars to see the shows they want at the different venues.

The Appalachian Village also features the Ghost Town museum, where visitors can get a guided tour and learn about the evolution of the amusement park through the years. Chagnon said a local company was contracted to bring in 20 horses and offer horseback rides for $15 a person.

Since she purchased the park, Presley has had plans to convert level four into a “holy land” with a large lighted cross positioned on the highest point of the mountain. While that is still part of the plan, the cross will be scaled back to a 125-foot structure instead of the 225-foot one she originally wanted. The new height will conform to Maggie Valley’s rule that no structure can exceed 125 feet.

The town initially turned to the state to determine if Presley could construct the cross on the mountain. Even though the state ridge law is in place to limit the height of manmade structures on the mountaintops, there is no agency responsible for interpreting the law or enforcing it.

Chagnon said the plan was to submit the final cross plans to the town planning staff, who will then ask the state for a ruling on the ridge law. The state will then say it isn’t in their jurisdiction and it will be referred back to the town. With no one willing to rule on the acceptable height, Chagnon said Presley shouldn’t have a problem getting a permit to build a 125-foot cross.

“Alaska wants a cross set up like a piece of art for everyone to enjoy,” he said. “The buildings up there will be more faith-based businesses and a place people can hold services or music series. It’s not going to be ready for 2016 though.”

Chagnon and Presley feel like they have listened to feedback from visitors and have addressed their concerns by offering a different experience for tourists and locals. Their hope is that Ghost Town Village will no longer be a place they visit once a year, but a shopping and entertainment destination they can return to over and over again throughout the season.

To her critics who have been disappointed in Ghost Town, Presley says, “Come and see what we’re doing for yourself — come be your own judge.”