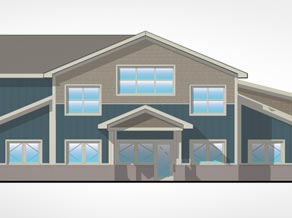 A comprehensive public safety campus is coming into shape in Haywood County with the construction of a new EMS and emergency management headquarters beside the sheriff’s office in Hazelwood.

The new EMS and emergency management headquarters will provide a centralized home base for emergency operations, something that is now lacking. Ambulances, quarters for crews, office space for managers and supervisors, and supply storage are currently housed in myriad locations around the county, adding a layer of complexity to the finely-tuned coordination of providing fast and efficient emergency response.

Emergency services have expanded by necessity over the past three decades to keep up with the growing population. EMS goes on 10,500 calls a year.

It not only takes more public safety workers to meet that demand, but they are outfitted with more equipment and technology than they used to be.

Finding a place to stash it all — both the additional staff and additional equipment — has been carried out in a hodgepodge fashion.

“It is all parked here and there,” said Greg Shuping, emergency management director.

Haywood County EMS currently operates six ambulances countywide. It has four back-up ambulances it can press into service during heavy call volumes or use in a pinch if one breaks down or just needs an oil change.

“Every ambulance we operate has drugs and IV fluids on it that are very temperature sensitive. We spend a lot of time putting stuff on trucks and taking it off trucks because if we leave it on the truck it would become a victim of temperature extremes,” EMS Director Jim Pressley said.

Having enough bays for the spare ambulances will solve that problem.

“We will have the ability to park everything in a heated bay out of the weather,” Pressley said.

But that’s not the only hassle ambulance drivers currently face when it comes to stocking their supplies. There’s no space to store supplies at the current ambulance garage and staff quarters, so every time they need to restock they have to trek across town to an off-site storage location.

“We will finally have an EMS building where the supplies will live in the same building as our people,” Pressley said.

During a disaster or emergency — whether it’s a simple search-and-rescue or major landslide evacuation — Shuping deploys a mobile field base set-up to coordinate the efforts of firefighters, police, medics and rescuers.

The quicker Shuping can get a mobile communications trailer and mobile command post trailer set up at the scene, more organized the response will be.

Since the trailers are parked outside, the equipment that outfits them has to be taken out and stored separately inside somewhere.

“We can’t store $20,000 of computer equipment in a trailer that’s sitting outside,” Shuping said.

And from a practical matter, the cold would zap the radio batteries.

Simply getting en route to an emergency requires an “organized scramble” to round everything up, Shuping said.

“All the technology that goes on these trailers is in my office somewhere in various rooms. The trailers are behind the county garage. The pole light tower and generator trailer are in the sheriff’s impound lot. The four-wheeler for hauling responders into remote areas are kept in the parking deck,” Shuping said.

The new bank of equipment bays at the emergency operations headquarters will finally provide inside conditioned space for the trailers, so equipment can be stored in them ready to go and in one place.

“It will avoid the controlled chaos we have now,” Shuping said.

The new emergency management headquarters will be built on the site of an old state prison that was closed several years ago and acquired by the county for $1.

“Sometimes people don’t think about it, but five minutes can make all the difference in the world,” Burris said.

EMS and emergency management have arguably gotten used to the makeshift spaces they’ve been using, but that makes the new headquarters an even more significant milestone.

“This will be the first new Haywood County EMS and Emergency Management base ever constructed,” Burris said. “We wanted to make sure we did this right.”

Burris, who is actually on the emergency management incident response team, held regular round-tables with Shuping and Pressley to program the space and layout in concert with the architect.

In addition to ambulance and equipment bays, the 13,000-square-foot building includes office space for emergency management staff and EMS supervisors, sleeping and living quarters for ambulance crews, and storage.

Burris estimated the price tag will be under $3 million. The county will put the project out to bid next month.

In a separate but related project, a new $2.7 million 911 dispatch and communication center is being constructed inside the sheriff’s office next door to the emergency services headquarters. It’s being paid for entirely with grant money. Over half the price tag is for 911 equipment and technology, including a new radio tower to carry signals from the dispatchers to the network of emergency responders across the county.

Dispatchers are currently squirreled away in a cramped satellite basement across town. Housing dispatch in the same building as the sheriff’s office will be improve response, according to Chief Deputy Jeff Haynes.

“It will tie up loose ends and gaps and provide a great efficiency,” Haynes said. “It will streamline the process by bringing them in under the roof and increase the continuity.”

Local contractor Clark and Leatherwood won the bid for the 911 dispatch center and construction will get underway soon.

Aside from the improved physical space, there’s intangible benefits of having a centralized campus for emergency services, 911 and law enforcement, Shuping said.

“Yes, this is a building but what it is really doing is it will put all of us on the same campus,” said Shuping, Emergency Services Director. “If I need to speak to 911, I can simply walk a couple hundred feet, or if the sheriff needs to speak to us.”

“It makes it all more cohesive,” Haynes said.

Changes on the way for Brown Avenue

A new headquarters for Haywood County emergency medical services and emergency management will improve the appearance of Hazelwood along one of its major thoroughfares.

It will be located beside the Haywood County Sheriff’s Office on Brown Avenue, on the site of the former state prison.

The rendering shown above is what you’d see off to the left if driving down Brown Avenue toward Hazelwood.

The attractive L-shaped building with a long bank of ambulance and equipment bays will screen the ramshackle collection of cinderblock buildings behind it — from the Pathway Center homeless shelter dorms to the animal shelter to county maintenance sheds.