An even Dirty Dozen: After 120-plus miles in the wilderness, hikers reflect on Wilderness Society challenge 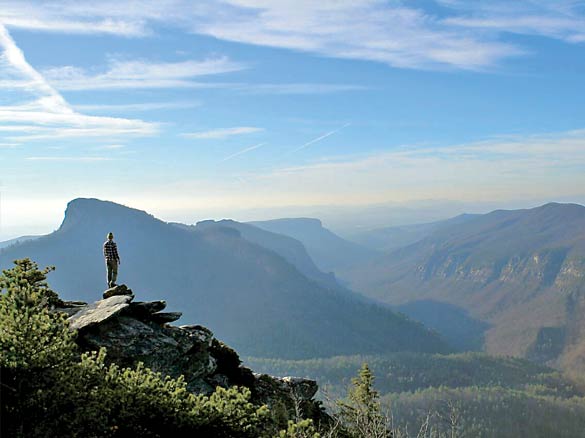 Olga Pader will always remember the Naked Ground Trail in the Joyce Kilmer-Slickrock Wilderness as “the hike from hell.”

It started out innocently enough, with she and her three hiking buddies stepping onto a wide, gently ascending trail. A weathered rock with a crack resembling a smile provided a pleasant spot for pictures and a water break.

But the happy illusion didn’t last long. The trail soon revealed its true colors as a narrow, rutted, steep, sometimes-disappearing path sufficient to challenge even the most experienced of hikers.

“It just went from bad to worse,” said Pader, who, at 70, is president of the Nantahala Hiking Club and a more adept hiker than most people half her age. “It got where it was really rutted, and with the briars and the laurel branches and the rhododendron branches you were actually pushing your way through brush.”

“It (the guidebook) said it was strenuous, but it couldn’t have prepared us for what we saw,” said Diana Otero, an active member of Franklin’s hiking community until her move to Indiana earlier this year.

Besides Otero and Pader, the group included Bill and Sharon van Horn, prominent supporters of hiking and the outdoors who have served in leadership roles with groups including NHC and Franklin’s Appalachian Trail Communities Committee. The crew certainly didn’t suffer from lack of outdoor skill or experience, but that woodland savvy didn’t stop them from losing the trail — twice — or from nearly slipping down a steep and snow-covered hillside. 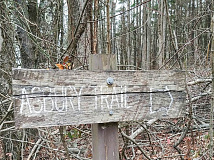 “On regular trails we can maintain 2 miles per hour,” Pader said. “I think we were doing like three quarters of a mile per hour.”

The sun was nearly gone by the time they emerged, victorious, having required 11 hours to go 9 miles. As Otero wrote in her blog entry about the excursion, “I found myself thinking that this is not a trail I needed to revisit.”

So why, of all the trails in Western North Carolina, did the foursome choose this one?

Blame it on The Wilderness Society, they said. The group — which for the past year has referred to itself as “The Wild Bunch” — tackled the trail in an attempt to meet The Wilderness Society’s Dirty Dozen Wilderness Hike Challenge. The challenge asked contenders to, in the space of just one year, hike at least 10 miles in each of 12 congressionally designated wilderness areas in the Southeastern U.S.

“A lot of the thinking behind it was to really make this a very authentic, experiential thing but then also something that really can carry forward into the future,” Jill Gottesman, conservation specialist for The Wilderness Society’s regional office in Sylva, said of the challenge.

Gottesman’s office had spearheaded the whole thing as a way to celebrate the 50th anniversary of the Wilderness Act, which Congress passed in 1964 to preserve areas where “the earth and its community of life are untrammeled by man, where man himself is a visitor who does not remain,” in the words of the act itself. The legislation turned 50 in September of last year, and that’s when the yearlong Dirty Dozen challenge kicked off.

“In our increasingly technologically advanced society where people are so plugged in and so connected and just in front of screens all the time, to really be able to step back and have that kind of experience I think is key for us to stay in balance,” Gottesman said. The hiking challenge was a way to encourage people to explore wilderness areas they might not otherwise have visited and to have the increasingly rare experience of aloneness in nature.

“There is a mental and spiritual connection to wilderness, to places that are not changed by humans,” she said. “I think that this challenge allowed me the opportunity to really get to places that still afford people  — even in the 21st century — (the chance to) really go back to where we came from.”

For Pader, that spiritual quality was at its height during her final miles of the challenge. Shining Rock Wilderness was the last of the dozen wilderness areas on her checklist, and she’d planned to conquer it with a hike up Cold Mountain in the company of friends Sande Lolli and John Hagdorn. But the hike proved more challenging than she’d remembered from the last time she did it in 2004, and she had to turn around before reaching the end of the trail. That meant she still had 2.4 miles to hike in Shining Rock to meet the 10-mile minimum.

So, she and her husband Jim returned later and put in 4 miles from the Big East Fork Trailhead. The sky was overcast, drizzly, and for Pader, that was just perfect.

“You have to be a little not normal to say that you enjoy your last hike being in the rain, but in the rain the forest totally changes,” she said. “I think that’s where the spiritual quality of the forest is at its highest, that you’re really transported into a mystical world.”

For Otero, the end of the challenge, also at Cold Mountain, was bittersweet. The Wild Bunch had accelerated its hiking schedule as spring dawned, and not just because of the weather. That’s when Otero learned that she and her husband would be moving to Indiana in a matter of weeks, and she was determined to finish the challenge before leaving the mountains.

Just two days before the move, she, the Van Horns and fellow hiker Paul Dyer stood at the summit of Cold Mountain.

“I thought that was kind of a fitting goodbye to the mountains,” she said.

A thirst for more

The Wild Bunch, as they called themselves, didn’t do every single hike together. One or the other of their number might be missing on any particular excursion, with other hikers joining in for an adventure here or there as well.

But the core four were a team, and nothing solidified that camaraderie more than the successful conclusion of the early “hike from hell” at Joyce Kilmer.

“It was horrible when we were going through it, but when it was done the sense of accomplishment was really great, and we kind of felt that anything after that would be easy,” Otero said. “There was a realization that I don’t think we could have done it with any other group.”

The team spirit lived on even after Otero’s move, as she discovered that nearby Kentucky fit into The Wilderness Society’s definition of “southeast.” She and her husband made the drive to the Clifty Wilderness, going for the baker’s dozen of wilderness hikes. She was quick to email Pader and the Van Horns to let them know she was still thinking about them and about the challenge.

Now it’s over, but Otero’s busy deciding what the next big adventure should be.

“As we moved to Indianapolis, I was telling my husband I need another challenge,” she said, mentioning that the shortlist includes visiting all of Indiana’s state parks and walking across the state.

Otero isn’t the only one who’s looking for another adventure.

“A lot of people didn’t get enough of it, and they want more,” said Michelle Ruigrok, outreach coordinator for The Wilderness Society. “Now we’re thinking about other types of challenges we can come up with.”

Challenges and competition are fun, but more important than places and prizes, Otero said, is the experience of being in these pockets of the primitive.

“It’s a very humbling and empowering feeling at the same time, and I think without that experience people are missing out,” Otero said. “There’s a lot of challenge and adventure to be had, but there’s a lot of value in the introspection that you can do when you’re in the wilderness.”

For Timo Holmquist, of Asheville, the Dirty Dozen challenge was more of a solo quest than a team venture.

“I like my friends, they’re cool, but they’re more of a Netflix-and-popcorn crowd,” he said, “so I had a little trouble getting people to come out with me.”

That didn’t faze him. Holmquist, 25, is a self-described “outdoors goober” who’s well versed in the principles of hike planning, provisions and navigation. Though his dad — Holmquist’s inspiration when it comes to outdoor adventure — accompanied him on some of the hikes, most of the time it was just him and his dog roving through the Appalachian wilderness.

Those moments, hours and miles of complete aloneness were transformative.

“The only thing you can hear is a little drizzle and the rustle of animals around you,” he said. “It’s really a profound experience.”

Sometimes, adrenaline pierces the solitude. Holmquist had his share of heart-stopping moments in the course of his 150 or so miles of wilderness hiking, such as the time he topped a hill to see a bear standing right in front of him.

“Heart-stopping” would also be an accurate descriptor for much of his hike in the Linville Gorge Wilderness Area, which a series of unforeseen circumstances pushed from a 15-mile to a 26-mile endeavor.

The day began with a ford of the Linville River, which three days of rain preceding the hike had gorged with fast-flowing water. The crossing was harrowing and nearly unsuccessful. Once on shore and dried off, mind still reeling from the experience, Holmquist set off to continue the trail, rounding a corner that put him face-to-face with a hunter — and the hunter’s gun, pointed right at Holmquist.

“That jumpstarted my heart a little bit,” Holmquist said.

Upon discovering that Holmquist was not, in fact, a deer, the man lowered the weapon and Holmquist continued on his way. A washed-out bridge and impossible river crossing lay ahead, as he would soon enough find out, and when Holmquist finally made it home at midnight, he could do nothing but fall into bed, fully clothed and with his shoes still on.

“It gave me a nice impression of what it’s like to get lost a little bit in the Southern Appalachians,” he said.

With just 38 of the 565 people who registered for the Dirty Dozen Wilderness Hike Challenge completing, Western North Carolina found itself well represented in the spread of challenge winners.

Read the hikers’ first-hand accounts of their adventures on the Dirty Dozen blog, www.southeastwilderness50.org/dirty-dozen-blog.