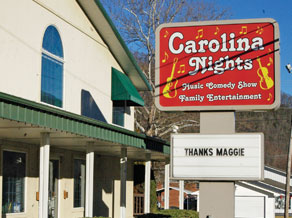 A brand new craft distillery is looking to set up shop in the former Carolina Nights dinner theater building in Maggie Valley, but the owner will first have to get special permission from town aldermen.

Even though the distillery will have retail space as well as a tasting room, Maggie Valley Town Planner Andrew Bowen said the manufacturing portion of the business made it fall under the “small industry” classification in the town’s zoning chart and has to be granted a special exemption to operate.

“Other towns call it a special-use permit, but Maggie Valley calls it a special exemption,” Bowen said. “It’s just any zoning use that the board thinks could work in town but may need extra caution.”

A distillery is definitely new territory for the town. Dave Angel has been working to get his business — Elevated Mountain Distilling Co. — off the ground for two years. While Haywood County has a number of craft breweries, this will be the first craft distillery to locate in the county.

Granting a special exemption involves the board of aldermen holding a quasi-judicial hearing where the applicant will present the details of his project, the planner will present the planning board’s recommendations and the public and the board will have a chance to ask questions about the project. The hearing will be held at 6 p.m. Nov. 16 at Maggie Valley Town Hall.

“What I’m trying to highlight for people is that the perception of a distillery is not what you may picture,” Angel said. “We’re not a bar and we’re not a nightclub — we’re a manufacturing location that does tours.”

Angel has been working on this project since he moved back home to Waynesville a couple of years ago. After spending his career in human resources for large companies, Angel started to explore other options.

“I started to look at what I’m passionate about and what would be good for the community,” he said. “I’ve made whiskey since I was 14 years old — it’s something I’ve always had an interest in.”

If the town board grants the special exemption, Angel has plans to purchase the former Carolina Nights buildings on Soco Road to house his distillery. The building has 10,000 square feet located on 1.7 acres in the heart of Maggie Valley. The space, which served as a dinner theater for many years, will have to be retrofitted for Angel’s operation.

Elevated Mountain Distilling was the 2015 recipient of the Haywood Chamber of Commerce’s Business Start-Up award, which comes with a $10,000 cash prize. Angel said he thinks his project won because of the potential it has for economic development in the county.

Making moonshine — or corn whiskey — will be a part of his production, but Angel plans to have an entire line of craft distilled spirits. Elevated Mountain also plans to produce craft vodkas, bourbons and flavored whiskeys. With its proximity to craft breweries in Waynesville and Asheville, Angel is playing with the idea of hop-infused whiskeys and partnering with local breweries to make “Beerskeys.”

“My mom is a Leatherwood, and they have a long history of making apple brandy. I would love to use Haywood County apples to make apple brandy,” he said.

Angel said Elevated Mountain would be a good steward of land and water because those natural resources are what will make his product stand out among others. He said staff will go through environmental program training and the company will re-evaluate its environmental impact each year to see where improvements can be made.

Solid waste at Elevated Mountain will be minimal — spent grains will be donated to farmers to use as feed, paper and cardboard packaging waste will be recycled and barrels will be reused multiple times and will then be sold.

The distillery’s liquid waste is acceptable as sewage and farmers could even use it for irrigation purposes with a land-use permit. Jonathan Creek, which is situated right behind the former Carolina Nights building, will be utilized for a mashing water source. The business also will be hooking on to Maggie Valley’s water system. Operating a distillery takes an enormous investment in equipment, including fermenters, boilers, a mash tun, compressors and bottle fillers.

Angel said he had talks with Waynesville, Canton and Maggie Valley while trying to find the ideal location for his distillery. In the end, it was late Mayor Ron DeSimone who talked Angel into moving to Maggie Valley.

“I actually met with him the day before he tragically died and he really sold me on this location and on Maggie Valley,” Angel said.

With Maggie Valley’s moonshine-making heritage, the distillery could be a welcome addition. Angel says his new venture will have a positive impact on the town’s tourism economy. He estimates having 16,000 visitors in the first year with a minimum 10 percent growth rate.

“I think it will bring people to Maggie and people already coming to Maggie Valley, it will give them yet another thing to do while on vacation,” Angel said.

Craft distilleries are on the upswing following the explosion of craft beer in the state. North Carolina didn’t have any distilleries in 2000 and now has more than 30. The Bourbon Trail is the No. 1 tourism attraction in Kentucky and now North Carolina has its own distillery trail. Elevated Mountain would be the first distillery off of Interstate 40.

“Elevated Mountain will be a major tourist attraction providing a whiskey experience tour, tastings and retails sales,” his business plan outlines. “A significant number of tourists will be destination specific due to interest in distilleries and as followers of the NC Craft Distillery Trail.”

Every bottle sold locally and nationally from Elevated Mountain will have a label that says the product originated in Maggie Valley. Per North Carolina law, distilleries are only allowed to sell one commemorative bottle a year directly to customers following a tour of the facility. Distilleries are also able to host tasting events at trade shows, festivals, conventions and other special events.

Angel hopes the ABC Store just across the street from his distillery in Maggie will have his product readily available if his visitors want to purchase more than a souvenir bottle.

Visitors will be able to tour Elevated Mountain Distillery for $10, which includes a shot glass for tastings. Upon completing a tour, costumers will be able to sample six products and purchase one bottle to take home on an annual basis.

The operation will be bare bones at first but Angel hopes to employ seven to eight people within the first year to help with the retail store and tours and that number may increase to 15 by year two. His goal is to have the distillery open by summer 2016 — preferably before Memorial Day weekend.