Stand tall or don’t stand at all: A conversation with Raymond Fairchild 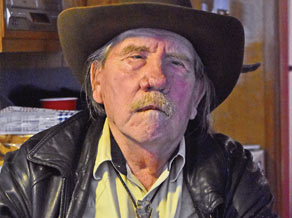 In August 2012, as one of my first assignments for The Smoky Mountain News, I found myself at the doorstep of the Maggie Valley Opry House. Owned and operated by acclaimed banjoist Raymond Fairchild, I was told “good luck” when it came to actually having a civil interview with the bluegrass icon. Referred to as “crabby” or “ironclad,” I wondered just how well my sit-down with him would actually go.

At that time, the Opry House was entering its 25th year, still running seven nights a week from May through October, with Fairchild, 73, and his wife, Shirley, always keeping the light on. In its prime some years back, the building would be filled to the brim with bluegrass lovers from far and wide, all eager to lay eyes and ears on the five-time world banjo champion in the flesh. These days, there are more empty seats than filled ones, more faded black and white photos lining the walls than new additions. But, the sounds radiating from the stage were as fierce and commanding as ever.

“It’s great here, but people just don’t turn out to sit like I think they should. They got other music on their mind, especially the youngsters,” Raymond said. “Some of the old people will come here and sit, but very few young people. I think bluegrass and mountain music are the greatest sounds in the world and they’ve done suffered. Music doesn’t have to be jazzed up, but this suffers.”

Strolling up to the front entrance, Raymond and his long-time cronies were sitting on ripped out car backseats and musty couches, pickin’ mountain melodies, perhaps even tossing around an old wise tale or two. To the untrained eye, it was a scene where one might think you’re just looking at a forgotten pile of junk and broken parts — of metal, of fabric, and of flesh. But, to those with curiosity and an ear for pure gold, it was the center of the universe.

“Twenty-five years means I’m 25 years older. I ain’t got rich, but I could have done things and ended up a lot worse,” Raymond chuckled. “My wife started the Opry House. I was on the road, doing 200 shows a year, when she started this. She wanted to open a place for nothing but mountain music. If you want to live to be old, don’t walk through that door with an electric instrument. You’re dead on the spot. She loves mountain music that much, all acoustic. That was our goal and that’s the way it’s going to stay.”

I sat there with Raymond for over an hour. We covered his entire career, from numerous onstage performances at the Grand Ole Opry to the mesmerizing nature of his hit single “Whoa Mule,” selling two million records (a rarity in the music industry, let alone in bluegrass) to the future of the sounds he cherishes most. He was sincere as he was skeptical on my being there. Raymond is a man of few words, and yet, it only takes a few words to truly understand quite possibly the most misunderstood figure in bluegrass.

“Well, I don’t know how long I’ll be here at the Opry House. I may be here five years or this may be my last year,” he said. “My wife’s having problems. She’s sick. I’m sick. But when I leave here, it’ll be a sad day. With a quarter century, this has become a second home. I’m here for the people and of course you got to charge to pay the light bill and the rent. I’m here for them. I just hope they would realize this is the place to hear it.”

We finished our interview, and I felt I got what a came for — a singular story of success and survival. Part Cherokee, part moonshiner, part businessman, all-around picker and grinner, Raymond is another voice in the rich tapestry of heritage and history that continues to make this region one of the most mysterious and storied in the world. As I left the Opry House during that first encounter, Raymond pulled me aside. He looked me dead in the eye, with a thousand-yard stare that gets more than his point across. He was sizing me up, if but for a moment.

“You know you’re the only journalist I’ve met that ain’t full of shit,” he smiled. “And if you keep it that way, you’ll do well in life.”

You see, what people don’t understand is how someone so talented as Raymond could be so stubborn. Personally, I never looked at his motives or life choices as stubborn — far from it. Raymond always stuck to his guns, and proceeded into the directions that were most beneficial for the moral and financial stability of his family. With little formal education, and from the most modest of upbringings, Raymond Fairchild has taken his time on this earth and made something truly unique of himself — a legend.

And when it was announced this year that Raymond, now 76, would be inducted into Bill Monroe’s Bluegrass Hall of Fame in Bean Blossom, Indiana, it seemed an ideal time to head up there and have another rendezvous with him. We discussed just what his legacy is, and how his faith in the perpetuation of bluegrass has never wavered. As others may have jumped the ship for shore, Raymond will always hold steady in his convictions, come hell or high water.

Garret K. Woodward: So, how are you feeling these days?

Raymond Fairchild: Well, I feel pretty good. But, you know, as you get older, you feel worse.

RF: Years ago, I didn’t think I’d make 76, but it feels pretty good, though there ain’t no such thing as your golden years.

GKW: What does it mean to be here in Bean Blossom?

RF: It means a lot to me because Bill Monroe started Bean Blossom, and when you listen to bluegrass music, only one man really played bluegrass music, and that man was Bill Monroe — the rest are copycats. Bill started it, and the rest have tried to replicate it. Now, there are great singers and great pickers, don’t get me wrong, but true bluegrass is only one man — Bill Monroe. Flatt and Scruggs was more country, The Stanley brothers were definitely mountain music, The Osborne Brothers were more country, and Jimmy Martin was more country. A lot of them weren’t like Bill, but they went and changed their sound to do what he did. You can try all you want, but only Bill Monroe can play Bill Monroe. Bill was one in a hill. Do you know what that means? It means if you raised a tater patch, he’d be one in a hill. There was only one Bill.

GKW: Do you remember the first time you came here?

RF: I believe it was 1977 or 1978. I played all over the United States and the world, but Bean Blossom was always on my mind. I used to listen to Bill on the radio when I was a kid. I listened to him and I wondered what he looked like. I listened to his voice. I wondered if he was great big man or a little short man. When I finally met him, I realized he was a powerful man. P-o-w-e-r-f-u-l. He had such a range in his voice where he could go down low to the dirt or he could sing to the top of the trees. Listen to “Danny Boy” if you want to listen to the range of Bill Monroe.

GKW: What does this induction into his Bluegrass Hall of Fame mean?

GKW: You’re saying it should have happened a lot earlier?

RF: Dwight Dillman (owner of the Hall of Fame and campground) is the man that thought enough of me to induct me. I appreciate it. But, it ain’t no big thrill. It don’t mean as much to me now.

RF: Well, because I was younger and working then. It could have helped get bigger stages and shows when I was touring more. I don’t need no recognition now. Hell, I’m dead. [Laughs]. Somebody asked me the other day what kind of future are you looking forward to, and I told them “a short one.”

GKW: What do you want your legacy to be?

RF: Well, I don’t care. I won’t be around anyhow, so what would I care?

GKW: What about as a musician?

RF: There are three styles of banjo — Earl Scruggs, Don Reno, and Raymond Fairchild. That’s it right there. The rest are copycats.

GKW: Explain to me the animal that is the banjo.

RF: I chose the banjo because I always loved the sound. In fact, I picked the guitar for many years before I played banjo. I still have the first banjo my daddy ever bought me, a 1956 RB-150 Gibson. I’ve still got it, and I’ve been offered a good price for it. But it means the world to me. It’s the banjo I raised my family with, the one I cut many records with.

GKW: When I talked to bluegrass legend Doyle Lawson, he said you should have been inducted into the Hall of Fame years ago.

RF: Well, Doyle is a man with his own style. Ain’t nobody need to try and copy Doyle Lawson or The Osborne Brothers or Jimmy Martin. And that’s why Jimmy fussed so much because he needed a hundred percent from his guys. He could stand there surrounded by six guys and he could immediately tell which instrument was out of tune. He was what you could call a perfectionist.

GKW: What do you see as the fate of bluegrass?

RF: Bluegrass is not going to die, but it’s going to change whether you and me like it or not.

GKW: What makes bluegrass and mountain music so special?

RF: What separates it from other types of music is when you see a band working together, it’s like a team of horses. You’ve got a team of horses out in the field, with the plow, and if one horse is lying down not doing their job, you ain’t going to get much work done. Four or five men up there, everyone doing their part with timing, melody and singing, and one man, even in the best five, can drag them down and kill’em.

GKW: The Bluegrass Hall of Fame has names like Bill Monroe, Jimmy Martin, Flatt & Scruggs, and now Raymond Fairchild, in it. What do you think about that?