The secret of ministry of frost 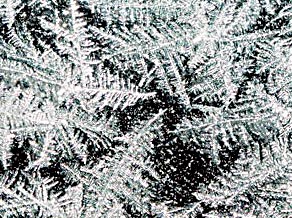 It’s Oct. 6 as I write this. The first frost hasn’t as yet arrived. But it won’t be long coming. Most gardening resources for Western North Carolina cite on or about Oct. 10 as the average date for a killing frost.

The first frost serves as a given year’s most distinctive dividing line. It’s hard to pinpoint just when winter becomes spring, when spring become summer, or when summer becomes fall. But the winter season has arrived when the first frost occurs.

Like summer dew, the frost appears on clear windless nights as the air cools and can’t hold as much moisture as it did during daylight hours. In summer and early fall, this excess moisture condenses on the surfaces of weeds, spider webs, metal tools and other exposed objects. But when the temperature falls below 32 degrees the same vapor crystallizes, forming frost.

Through a process known as sublimation, the vapor does not turn first into water and then freeze. Instead, it changes directly from the gaseous state into a crystalline form. As more and more vapor freezes, delicate featherlike patterns sometimes called “frost flowers” are formed. These are most noticeable when traced on windowpanes that glisten in the glow of a lamp or candle at night or in the early morning sunlight.

Like frost and dew, fog is the product of saturated air. So long as the tiny droplets in a fog can move unheeded through below-freezing air, they remain super-cooled and unfrozen. Rime frost occurs when the droplets encounter tree limbs or other objects that cause them to crystallize instantly and coat the object with granular tufts of ice.

Black frost of the sort that often occurs on highways is the most dangerous variety because since it isn’t accompanied by rime and can’t be seen by motorists until it’s too late.

These are scientific explanations for frost. But frost is also a spiritual element. This aspect was what the Romantic poet Samuel Taylor Coleridge (1772-1834) focused upon in his poem “Frost at Midnight” almost two centuries ago.

The 74-line poem — which was addressed to his infant son — is too long to quote in full. But here is the closing stanza:

“Therefore all seasons shall be sweet to thee,

Whether the season clothe the general earth

With greenness, or the redbird sit and sing

Betwixt the tufts of snow on the bare branch

Of mossy apple tree, while the nigh thatch

Heard only in the trances of the blast,

Or if the secret ministry of frost

Shall hang them up in silent icicles,

Quietly shining to the quiet moon.”

Winter can be grim, of course, but it is in many regards the sweetest season of all. It’s the time when we see most clearly and feel most keenly. As Coleridge implies, it’s the season that’s ushered in via “the secret ministry of frost.”