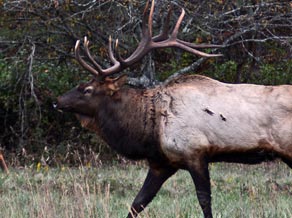 Elk and humans are still trying to figure out how to cohabitate in Western North Carolina since the herd was re-introduced to the Cataloochee Valley in 2001.

Mike Eveland, a Maggie Valley alderman and manager of the Maggie Valley Inn, said elk were a great asset and loved by tourists coming to the valley. However, that positive seems to get overshadowed by the negative publicity over elk-related accidents.

“We want it to be safer for the elk,” he said at a recent elk task force meeting. “We want people to be excited about them being here instead of the negative publicity.”

Since forming the elk task force last month, Maggie Valley Police Chief Scott Sutton said he’s received a lot of positive feedback on the effort and plenty of interest from people who want to get involved.

“We’ve had an unbelievable amount of phone calls from people asking what they can do to volunteer or help,” he told fellow task force members.

It’s a multi-faceted issue and is not an easy fix by any means. Installing more warning signs and decreasing the speed limits along U.S. 19 from Maggie Valley to Cherokee might seem like a quick and easy solution, but Scott Cook, Division 14 Traffic Engineer for the North Carolina Department of Transportation, told officials it probably wouldn’t be effective.

“If there are other locations where elk are crossing, we’d certainly entertain the idea of putting up more signs there, but we don’t want a sign every 50 feet,” he said.

Maggie Valley Town Manager Nathan Clark said there were already two elk crossing signs in the town limits and two more between Soco Road and the Jackson County line. The signs seem arbitrary since many of the elk-related accidents on the highway involve local residents who should be aware of the elk crossings.

As far as trying to reduce the speed limit on U.S. 19, Cook said the DOT wasn’t in favor of posting a speed limit lower than 45 miles per hour outside the town limits on Soco Road where the most crossings seem to be. He said a speed study done six months ago shows that most people are driving 55 miles per hour.

“If you try to artificially lower the speed limit it doesn’t work that well,” he said.

Aside from improvements along the highway, the National Park Service is in the process of purchasing several tracts of land with conservation easements to give elk more space near the areas where they seem to be congregating the most, including a tract on Black Camp Gap Road.

Members said managing those properties outside of the park for elk could help or it could just mean more elk roaming around Maggie Valley in the long-term.

Task force member Jim Blyth said it appeared that the most accidents were occurring during the elk rut season, which is when the elk breed in the fall.

Wildlife biologists Justin McVey and Joe Yarkovich said their data showed that accidents were spread out throughout the year but more occurred in the spring and summer months.

“Since I’ve been recording data, there’s not any more accidents during the rut,” McVey said. “There’s just more media attention to it this year, but the number of accidents has been about the same.”

The task force also talked about installing educational elk kiosks in the town parks — Sutton said that is where the volunteers could come in handy. Volunteers wanting to help with the elk safety dilemma could form a committee and take turns giving educational talks at the kiosks and answer questions from tourists.

It’s a concept similar to the Elk Bugle Corps used by the National Park Service. The corps is made up of more than 80 volunteers who provide elk information for visitors. Yarkovich said the program is extremely beneficial but takes multiple training sessions a year to make sure volunteers continue to provide the right messages the park wants to get out to visitors.

“It’s a great asset but just don’t think you can get it set up and forget about it,” he said.

“An elk visitor center in Maggie Valley would be a great idea,” said Yarkovich, a wildlife biologist for the National Park Service. “Maggie is missing the boat by not capitalizing on it.”

The elk task force meetings have also been beneficial because it has allowed different agencies to be on the same page when it comes to responding to elk-related accidents.

Sutton said it had been a learning process for his officers on how to properly put down an elk following an accident. The park service has a suggested protocol for how to humanely put down an injured elk.

“You have to have the right weapon to do it in one humane shot,” Sutton said. “Some elk you can get closer to than others, but officers typically want to shoot it like they would a deer.”

Yarkovich said the protocol was to put an elk down with one close-range shot to the neck using a rifle.

That creates a problem for highway patrolmen. Sgt. Rogers said the state was no longer purchasing shotguns or rifles for patrolmen. He also said the highway patrol had been instructed not to kill elk because they are a federally protected animal and to call the Wildlife Commission instead.

“But sometimes we can’t wait for wildlife officers to get there,” Rogers said.

Mike Carraway, N.C. Wildlife Commission regional supervisor, said he would get to the bottom of that issue because it’s the commission’s rule that the first law enforcement officer on scene is responsible for making the call on whether to put down an elk.

“If you feel it needs to be put down on site then you can do it,” he said.

“We all agree it’s the humane thing to do, but agencies are afraid to do it because we get blasted on social media and in the news,” Haynes said.

All agencies discussed coming up with a written protocol with dealing with injured or dead elk so that there is no question about how to handle those situations.