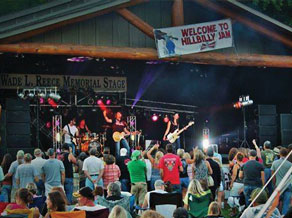 Six years ago, Becky Ramey and Terry Frady started a little festival in the parking lot of their Maggie Valley restaurant with improv performers on the back of a flatbed truck and one keg of beer.

Today that same festival attracts thousands of people to the Maggie Valley Festival Grounds to see 20 local and regional bands playing on the Wade L. Reece Memorial Stage. Not to mention there was no shortage of beer from North Carolina craft breweries.

When asked why they continue to put so much work into the Hillbilly Jam festival, Ramey is quick to respond, “Because we’re crazy.” But deeper down, they do it because they love traveling to different places meeting people and introducing people to the beauty of Maggie Valley.

While the festival has survived and grown each year, Ramey said it hasn’t been without setbacks. For the first three years, the festival was called the Popcorn Sutton Jam and was associated with the famed local moonshiner. Ramey and Frady worked closely with Sutton’s widow, Pam Sutton, but a falling out between them forced the promoters to find a different name.

Thinking they had all their ducks in a row this year, the organizers were hit with a cease and desist letter nine days before the big event July 31-Aug. 1. The letter came from New York City law firm Kenyon & Kenyon — trademark attorneys for Woodstock Ventures. Yes, that Woodstock, the producer of the world-famous WOODSTOCK Musical Festival, beginning with the 1969 iconic event in upstate New York.

“Only Woodstock Ventures and its authorized licensees are permitted to use the WOODSTOCK trademark as the name for concerts, music festivals and related events,” the letter read. “Hillbilly Woodstock is not authorized, and will cause consumers to mistakenly believe that Woodstock Ventures has approved, or is connected with, your activities.”

The festival promoters were asked to terminate all marketing and promotion of Hillbilly Woodstock or be sued for trademark infringement.

It was hard for Frady, Ramey and Hazelwood to believe their little festival in Maggie Valley go the attention of big-time lawyers in New York City.

“We thought it was a joke at first,” Frady said.

After consulting with their own attorney, Jim Moore, Ramey said they offered to change the festival name to Hillbilly Woodfest, but that wasn’t satisfactory for the trademark lawyers in New York.

“People keep telling me, ‘Becky, you should be appreciative because it’s put you on the map,’” Ramey said.

So there they were a week from the event with banners they couldn’t use, T-shirts they couldn’t sell — everything labeled with Hillbilly Woodstock had to go. Under the gun, promoters went with Hillbilly Jam and rushed to get banners reprinted and T-shirts redone. Even the drumkit on stage had to have new lettering to reflect the new name.

“I don’t know how they heard of us, but we sure didn’t have the money to fight them,” Ramey said of the trademark issue.

But Hillbilly Jam has made a name for itself in the last few years as it attracts more prominent bands, bigger celebrities and national sponsors. Frady said 20 states were represented at this summer’s event.

While the organizers had to beg bands to play for free the first few years of the festival, they have now fulfilled their promise in paying the musicians well with the added potential of being seen by the right people.

“Two people at our jam have signed record deals with Silvercreek Records, including the Lindsey Cardinals Band and Kaitlyn Baker,” Frady said.

Ramey said she is proud of the fact that they are now able to pay the bands and give them a world-class stage to perform on — and they’ve done it all without one signed contract. Going only on their word, every band showed up as planned this year.

And only minutes after Ramey announced the 2016 Hillbilly Jam dates on Facebook, bands were contacting Frady to make sure they had a spot for next year.

“Our first event we begged people to play for free and promised to pay the bands when we could,” Ramey said. “This year everyone is calling us — that’s a great feeling.”

Some have complained that the festival now charges $10 to get in compared to the $2 entry several years ago. As the festival grows and offers more music, entertainment, food, and vendors, expenses increase. The bands must get paid, the venue must be booked, insurance policies and licenses must be obtained and staff has to be on hand. Frady and Ramey still think it’s the best bang for your buck.

“Where else can you hear that many great bands live for $10?” Ramey asked.

The trademark infringement issue was a big bump in the road, but it isn’t one that will slow down Hillbilly Jam. Planning is already underway for 2016 and the festival grounds is already booked again for July 29-30. Two musicians — a former American Idol contestant and former The Voice contestant Chad Walker — are already signed up to play next year. Bands each got an hour set this year, but Frady said they would try to give bands a 90-minute set next year to allow them to showcase their talent.

The organizers are also listening to feedback from attendees and making adjustments as needed. To address a few complaints about the loud music, Ramey said music would stop at 9 p.m. next year instead of 10 p.m. To alleviate the issue of limited parking at the festival grounds, organizers will be shuttling people over to the festival from Eaglenest next year.

“Every year just keeps getting bigger and better,” Ramey said. “But every year gets harder to top.”