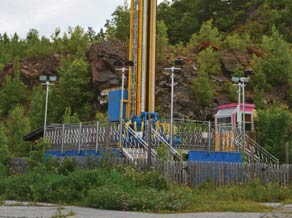 Alaska Presley has talked for years about her vision of having the tallest cross in the western hemisphere placed on top of her Buck Mountain property in Maggie Valley, but now it seems that plan will not come to fruition any time soon.

The cross was part of her long-range plan to turn part of her current Ghost Town in the Sky entertainment park into Resurrection Mountain — a Christian-themed park. Presley has had a 220-foot cross designed and ready to go since 2013.

In anticipation of that kind of request from Presley, the town of Maggie Valley informed her months ago that the state ridgeline regulations would come into play even though the town doesn’t have any ordinances on the books to restrict the construction of the structure.

Presley also told the town she was thinking about constructing a cross that would double as a cell phone tower, which are exempt from the state ridgeline law, but then town’s ordinance limiting cell phone towers to 125 feet would kick in.

Town aldermen were concerned about whether the ridgeline law would be enough to keep the height of the cross in check. One option would have been to consider imposing a moratorium on the issue until the town could put regulations into place before Presley applied for a permit to construct a cross.

However, town staff was surprised to receive an application from Presley asking for a cell tower on top of Beck Mountain and nothing more.

During a special meeting in August, Town Planner Andrew Bowen explained to the aldermen that the request was the first application the town has received asking for a cell tower to be located within the corporate limits. The proposed location is atop Buck Mountain (Ghost Town) near where the “Drop Tower” is located from the previous theme park ride area.

According to the application, the requested monopole cell tower would be 125 feet tall with a 4-foot lightning rod on top. The lightning rod would not be included in the structure’s calculations. T-Mobile has sent written documentation that it would allow other companies to co-locate on the structure.

The proposal includes a lease to T-Mobile for a 50-by-50-foot lot, which is under the 75-by-75-foot town criteria for a cell tower.

The proposal already went before the Maggie Valley Planning Board in August. The board gave a positive recommendation but asked that five items be addressed before the aldermen gave final approval.

The planning board wants to see documentation of the need for exceeding the height limitation of 125 feet; a letter stating that the cell tower on Setzer Mountain has been exhausted; wants the size of lot to be 75-by-75; wants all setback requirements be met; and wants landscape screening to be provided.

Bowen did say he was told by Haywood County that the cell tower on Setzer Mountain was at full capacity. The property will be fenced and will have a long-term lease to T-Mobile. The area will not be parceled out.

In order to get a better understanding of the height of the proposed tower, Town Manager Nathan Clark told aldermen that the existing Drop Tower ride located where the cell tower would be placed is 87 feet tall and can be seen from the Town Hall parking lot.

Before the town board decides whether to allow the cell tower, a public hearing on the issue will be held at 6 p.m. Monday, Sept. 14, at town hall during the next aldermen meeting. Public comments can be made at the meeting and written comments will be accepted at town hall until the meeting.

The Maggie Valley Board of Aldermen will hold a public hearing at 6 p.m. Monday, Sept. 14, in the Town Hall boardroom on a proposal to locate a T-Mobile cell tower on Buck Mountain (Ghost Town in the Sky) near the existing “Drop Tower.” Oral and written comments are encouraged.