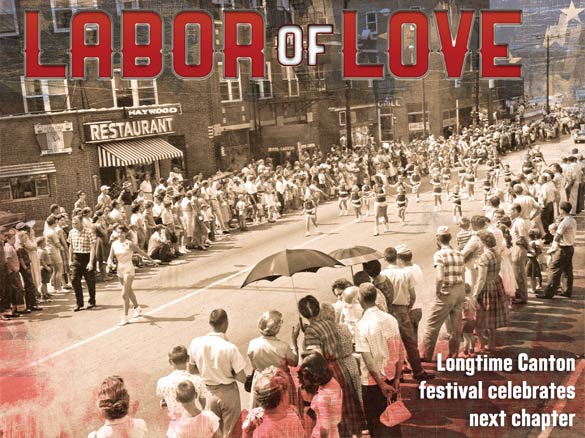 It is the heartbeat of a town and its people.

While some communities pride themselves on their Christmas, 4th of July or Memorial Day festivities, the town of Canton showcases Labor Day — a time every year when any and all cheer the workingman, the blue-collar nature of a place as special and unique as its inhabitants.

ALSO:
• Music lineup
• Memories for a lifetime
• In her own words
• So, why Canton?

“The spirit of Canton can be summed up in one word — grit,” said Canton Town Manger Seth Hendler-Voss. “Today, our challenge is to reinvent ourselves to capture the imagination of a growing economy around us, and there is no doubt in my mind we will succeed if we are willing to stretch ourselves.”

Coming into its 109th year, the Canton Labor Day Festival will be held Sept. 5-7 at Sorrells Street Park in downtown. Known as the “Oldest Labor Day festival in the South,” the event, which is getting a long-awaiting reboot, will host 20 bands over the course of three days, all of which is free and open to the public. And with the theme, “A celebration of all things made in Western North Carolina,” the festival will bring the essence of Canton and greater Haywood County into the regional spotlight.

“What held true year after year was the opportunity to celebrate and honor the spirit of Labor Day,” said Tina Masciarelli, project coordinator for Buy Haywood, a nonprofit focusing on connecting and perpetuating local agriculture. “That meant acknowledging all the hard work that has kept our community alive through two crippling world wars, the Great Depression, the great recession, floods, and multiple industrial revolutions.”

A nearby Bethel native, Masciarelli looks back fondly on what the Canton Labor Day meant to older generations, and how it serves not only as a window into the past but also an open door to the future.

“My mother would retell what it was like growing up in downtown Canton in the 1930s and 40s, walking to school alongside my grandfather as he walked to work at the mill. There was no college or online learning. Men stood shoulder to shoulder and taught each other new skill sets needed in order to progress. Mothers took turns babysitting each other’s children while they took in washing or ironing or cleaned houses to earn a little more money,” she said. “Life was humble. Folks were grateful for what they had even during times of hardship — that was Canton Labor Day. It was more than a festival with music, clogging and rides. It was a glimpse into our past that made me grateful for the future that those who came before me made possible through their hard work.”

And championing those hard work ethics over the years is festival headliners Balsam Range. The 2014 International Bluegrass Music Association “Entertainer of the Year,” the quintet is made up of Canton and Haywood County natives, each of whom work separates jobs all week and perform every weekend, all in effort to not only put food on the table, but also smiles on the faces of their friends, family and neighbors.

“Labor Day was a huge thing for me when I was a kid — memories that I still have to this day. The parade, bands, sirens, horses and wagons, and Judy Gibson riding through, and the doll shows that my sisters loved,” said Tim Surrett, bassist for Balsam Range and a lifelong Canton resident. “For me, I loved the music. The old baseball field was like Madison Square Garden to me. I have a vivid memory of my dad playing that ballfield stage to what looked like an ocean of people to me as a small child.”

Though the annual festival has always maintained a steady level of appreciation and support, it was the Canton Town Board, local organizations and members of the community this past year who felt the event was ready for some new blood. It was time to move it away from the Canton Rec Park and bring it back to its origins in downtown — a decision meant to spur connectivity within the community, and at the same time project the ultimate trajectory of Canton. Add that to new economic and residential initiatives and you have a community vision aiming at a renewed sense of pride and purpose.

“As an administrator who is tasked with resolving the revitalization puzzle that has stumped Canton for over a decade, this festival means shedding new light on the value of our economy,” Hendler-Voss said. “This festival means having a chance to enlighten visitors to the value and cultural richness of Canton. At its core, this community is fiercely proud of its history and loyal to the people and institutions that paved the way before them. We also have a welcoming spirit — not just to other people, but also to new ideas. This year’s festival is a case-in-point.”

“I deeply appreciate the spirit of innovation, grit and determination that is alive and well in Canton,” Masciarelli added. “Their residents are truly local stakeholders in every sense. They show up and come from a place of ‘yes’ rather than a place of ‘it can’t be done.’ It is a community who knows what they are and is willing to evolve to do more than stay alive — they want to thrive.”