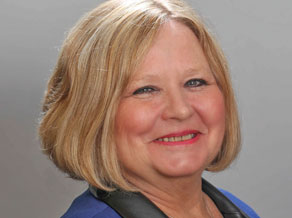 A month after the sudden death of Maggie Valley Mayor Ron DeSimone, longtime alderwoman Saralyn Price has decided to seek the mayor’s seat as a write-in candidate in the fall election.

DeSimone had signed up to run for a second term as the valley’s mayor but he died in a construction accident on July 17. The deadline had just passed for new candidates to sign up to run, which left the race with two other challengers — Jasay Ketchum and Justin Phillips.

While it was too late to add a new name to the ballot, Maggie Valley Board of Aldermen have no doubt been pondering who would be the best person to run as a write-in and keep DeSimone’s vision — the current board’s vision — moving forward. Price is the likely choice as she has served three terms on the town board spent 30 years in local law enforcement and her family’s roots run deep in Haywood County.

“Due to the untimely death of Mayor Ron DeSimone, and since I love and believe in Maggie Valley, I felt that it was necessary for me to seek this office,” Price said in a press release. “Over the past two years the board has been working in harmony trying to better Maggie Valley and I want to see continued improvements for businesses and residents alike.”

Price said the upcoming election could derail the progress being made by the current board depending on who gets elected as aldermen and mayor. Her goal is to continue down the current path, which has been cooperative and productive.

“I’m a native of Maggie Valley — I love Maggie Valley, I work here, I live here — I just really felt like I needed to do this,” she said. “I want to carry out the goals Ron had and the goals the board has.”

Price said that within the next 10 days she will comply with state laws regarding campaigns and will provide detailed background information as well as goals, objectives and vision for continued positive improvements for Maggie Valley and the surrounding community.

She said being a write-in candidate definitely has its challenges, but her name recognition and experience may help her overcome those difficulties.  She plans on printing flyers to explain to voters how they can cast their vote for her because they will actually have to type her name in on the electronic voting machines.

Price was last elected for a four-year term on the board in 2013. She will not have to vacate her board position to run for mayor. Also up for re-election this year in Maggie Valley are Alderman Phillip Wight and Alderwoman Janet Banks.