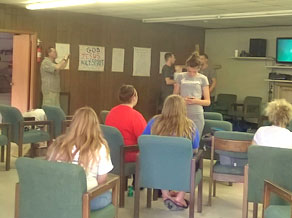 Lowell Monteith, pastor of The Father’s House ministry, says the shelter has many needs right now. However, Macon County’s only homeless shelter’s most pressing need is community support.

“We need community support — we need people in Macon County to get involved,” he said. “Other ministries stated they are working for the homeless, but we’re the only ministry meeting the needs of the homelessness in Macon County.”

Monteith said he’s received a lot of push back in the community and feels like the county inspection officers are trying to shut down the shelter. He went before the Macon County commissioners last month to ask for their help with keeping the shelter open.

The shelter located behind Whistle Stop Mall in Franklin can house a maximum of 30 people, but Monteith said he has about 10 people participating in the ministry’s program. To meet fire safety codes, Monteith said he would need to install a fire sprinkler system, which could cost $25,000 that the ministry doesn’t have. Commissioners told Monteith they have no authority to suspend the state building codes for the shelter.

County Manager Derek Roland said the fire marshal and the county building inspector were charged with doing their job accurately and without prejudice to enforce the building code.

“I’m working with county officials trying to come up with plan to suit everyone and to become compliant with them,” Monteith said.

While the ministry is able to pay its bills and still provide services for homeless in the area, Monteith said he doesn’t have the money to install a sprinkler system. He hopes the community will lend its support to keep the shelter open.

“There are 164 churches in Macon County. If every church pledged $20 a month it would take a majority of the financial burden off,” he said.

Monteith said people have complained that the church/shelter building, which used to house a retail nursery, is not adequate for the shelter’s needs. While he admits there isn’t full state-of-the-art kitchen facility, they have a sink, a stove and everything needed to cook, eat and clean. The facility also has bathrooms and a washer and dryer.

“Most people talking about our facility have never been there,” he said. “Sometimes we have disgruntled people that leave because they don’t like the program, but I promise you anyone who actually comes and sees what we’re doing will realize a majority of things they said about the facility are not true.”

Monteith said Macon New Beginnings, a new nonprofit working to address homelessness, had yet to offer support to his ministry. He said several people who formed the new organization used to be members of his ministry’s board.

“When I started casting my original vision, they were all connected and part of the board, but when I started placing expectations of time and money, they were not willing to commit fully to what I wanted,” he said.

Bob Bourke with Macon New Beginnings, said he feels the Father’s House shelter is not sufficient and feels something better should be put in place for Macon County.

In addition to financial needs, Monteith said the people staying at the shelter and going through the six-month program are in need of greater things — they need to know that the community cares about them to be able to completely be rehabilitated.

“The community needs to get to know these folks. That’s the critical challenge of getting these people that have felt rejected by the community that people actually do care about them,” he said. “The more people that get involved and express they care, the easier it is to break off some of that bondage placed on them and change that mindset that they will never achieve anything.”

The Fathers House ministry has been operating for more than a year and offers homeless people a place to stay if they commit to going through the six-month Christian-based program.

While only 10 people are in the program right now, Monteith anticipates a full house as more homeless people seek a warmer place to stay in the winter months.

To donate to The Father’s House, call Monteith at 828.371.3334 or visit www.gofundme.com/thefathershousefra.