Righteous or malicious? The Smoky Mountain News goes inside Operation Something Bruin 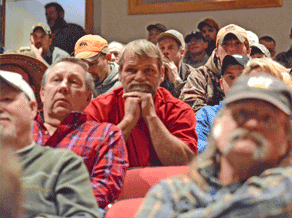 Dozens of hunters snared in the sweeping undercover bear poaching investigation known as Operation Something Bruin have refused to take their licks quietly, and continue to kick up dust two-and-a-half-years later.

But they came up largely empty handed of the more egregious crimes, and mostly caught the hunters playing loose with hunting regulations.

While 55 people were charged with more than 200 hunting violations — some in state court, come in federal court and some in both — about half had the charges dropped or were found not guilty.

The fallout from the operation brought the rich tradition of hunting under fire. Critics have grown louder throughout the legal proceedings, accusing the agencies and prosecution of judge shopping and stacking charges out of desperation to chalk up convictions.

The complaints in turn prompted state and federal oversight hearings on whether the wildlife agencies abused their power.

Meanwhile, wildlife agencies have defended the operation. The covert tactics were the only way to see what was really going on when hunters went out in the woods. If left unchecked, disrespect for hunting laws would deplete wildlife populations and diminish the shared natural resources of society.

The Smoky Mountain News launched an investigation of its own to explore the many unanswered questions surrounding Operation Something Bruin.

Were those charged indeed reckless cowboy hunters or merely in the wrong place at the wrong time? Were bears being exploited by renegade hunting tactics? Did overzealous wildlife officers rack up unfounded charges and then stack them in court to justify their operation?

• Personal stories of hunters caught up in the dragnet, including what they admit to and what they don’t.

• The rich, cultural heritage of hunting in Western North Carolina and Georgia.

• The legal proceedings of the cases, including those that unraveled and those that stuck.

• The tactics of the wildlife agents and what it takes to go undercover.