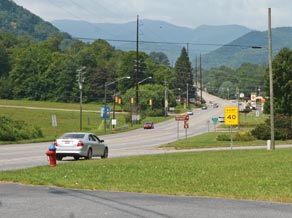 Maggie Valley leaders aren’t taking no for an answer after the North Carolina Department of Transportation said nothing could be done to improve safety conditions at the U.S. 19 and U.S. 276 intersection.

The town board has heard numerous complaints and many residents in the valley have witnessed or experienced the dangers of the intersection — especially in the last year. Following the death of two motorcyclists in early June, the DOT conducted a routine investigation to see if any improvements need to be made to the roadway.

DOT recently came back with a 44-page analysis of the intersection, but its conclusion of “No recommendations” surprised town officials. It’s understandable that the DOT wants to show it is not liable for these types of vehicle fatalities, but the board found it hard to believe the report offered no suggestions for improvement.

Maggie Valley Alderman Mike Eveland, manager of Maggie Valley Inn at the corner of the intersection, asked for the subject to be put on the agenda for the board’s Aug. 17 meeting for further discussion.

“I live there and on a daily basis I see what goes through that intersection. To say there’s nothing we can do is — I can’t publically express my thoughts there,” he said at a recent agenda setting workshop. “We as a board have been pleasant and professional about it, and I think that needs to change. I guess we’re going to have to cry louder.”

Town Manager Nathan Clark said he already asked for a meeting with DOT regional traffic safety engineer S.M. Collier, to better understand how he came to the conclusion that nothing could be done. He also wants to express the board’s concerns about public safety.

“I am surprised and disappointed that the current recommendation is ‘no recommendation.’ I look forward to discussing this issue more with NCDOT to better understand their methodology and reasoning for the no recommendation,” Clark said in a follow-up email.

The report did contain a note stating that any brush overhanging DOT right-of-way would be trimmed and that DOT would examine the feasibility of relocating two mailboxes on the westbound shoulder of U.S. 19-276 so that roadside signage warning people of the upcoming intersection would be more visible.

Even though the speed limit is 45 miles per hour going through the intersection, many people driving westbound are traveling 60 miles per hour or more as they approach the traffic light. Westbound traffic is also moving downhill and vehicles have limited sight of the traffic light. Traffic turning left and right out of Dollar General — which sits to the right just before the right turn onto Jonathan Creek Road — also creates a traffic hazard.

With tourism on the rise again in the valley, aldermen worry the problem is only going to get worse.

On June 6, Joseph and Michelle Dunlap of Bessemer City were visiting Maggie Valley for a Shriners’ convention being held at the festival grounds. The couple was traveling westbound in the left lane on U.S. 19 on their motorcycle near the Dollar General when they collided with a vehicle that was turning left out of the store onto U.S. 19 eastbound. Joseph was pronounced dead at the scene and Michelle died later at the hospital.

Maggie Valley resident Billy Case was driving the second vehicle. After an investigation by Maggie Valley Police Department, Case was charged with two counts of misdemeanor death by vehicle after determining Case failed to yield the right of way.

Maggie Valley resident Otis Sizemore — a Shriner who was instrumental in getting the convention and parade to locate to Maggie Valley this year — started a petition after the accident.

“I’m very disappointed in the report. I don’t know how in the world they can ignore a request from 1,200 people that signed a position and a request from the town to make an area safer for everyone that comes through there,” he said.

The petition with 1,200 signatures from residents, tourists and business owners asked DOT to consider lowering the speed limit to 35 mph, installing a caution sign with flashing yellow lights and prohibiting left turns out of Dollar General.

“I know they can’t do everything people ask of them, but these are very simple things to slow people down and make it safer,” Sizemore said.

According to the DOT report from the fatal accident, the sight distance from the Dollar General driveway looking eastbound was about 550 feet and determined there was no apparent roadway fault in the accident. The analysis of the intersection also noted that there have been 19 crashes near the intersection since June 2010 and only one of them was fatal. While nighttime and wet road conditions were factors in several of the crashes, alcohol was not a factor in any of them.

Alderwoman Janet Banks said a recent shakeup at the DOT might help the board out. NCDOT Secretary Tony Tata suddenly resigned in late July and Gov. Pat McCrory appointed Nick Tennyson to the post. Banks said she hopes the new secretary will be more willing to implement safety measures.