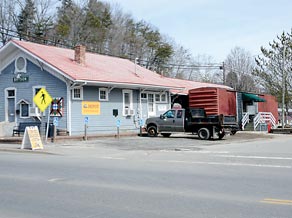 The Bryson City Board of Aldermen is formally asking for public input after mulling over the idea of closing Fry Street in downtown for almost a year.

The topic has been a source of contention since the Swain County Tourism Development Authority made the request last fall, but the town board has been reluctant to make a decision. The town was asked to relinquish its right of way on the street, which would allow the closure and make way for a pedestrian park at the Great Smoky Mountain Railroad train depot on the corner.

The idea of a pedestrian plaza, which would be located on the train’s property, is not what people are opposed to, though. Fry Street is not a major thoroughfare, but it does provide parking spots for several businesses across from the train depot.

While the plan for the pedestrian plaza includes paving the gravel parking lot in between the businesses, merchants say 35 paved spots off to the side won’t be enough to fix the parking problems. Merchants want to be assured by the railroad that train customers will use the designated train parking on the other side of Everett Street instead of the limited public parking.

Kim Albritton, vice president and general manager for GSMR, has said that issue has already been addressed. Instead of train passengers trying to dodge the $5 train parking, now the cost is included when they reserve their tickets beforehand.

Others in town seem to be skeptical about any plans put forth by the train — whether it will actually come to fruition, how much it will cost the taxpayers, and whether it will benefit the town as a whole or just the railroad.

Railroad officials say the pedestrian plaza would feature new trees and landscaping, an open lawn and a stage for live music and other events. The TDA supports the project because it would help make Bryson City more pedestrian-friendly and hopefully keep railroad passengers around town longer once they return from their train trip.

TDA Chairman Brad Walker said the project could cost anywhere between $250,000 to $400,000 depending on what final plan is agreed on. It would be paid for with TDA funds and grant money.

Aldermen Jim Gribble and Kate Welch, who are both seeking re-election this fall, have both voiced concerns about the pedestrian plaza. Welch has been opposed to the street closure and has even been accused of being “anti-railroad,” but she said she just wants to see all businesses be treated fairly.

While the proposed name of the plaza was Bryson City Railroad Square Park, Gribble asked that a different name be selected — maybe Fry Street Station Park. He said the project is one he would like to see through, which is one reason he is seeking re-election.

Public hearing on the proposed closing of Fry Street.