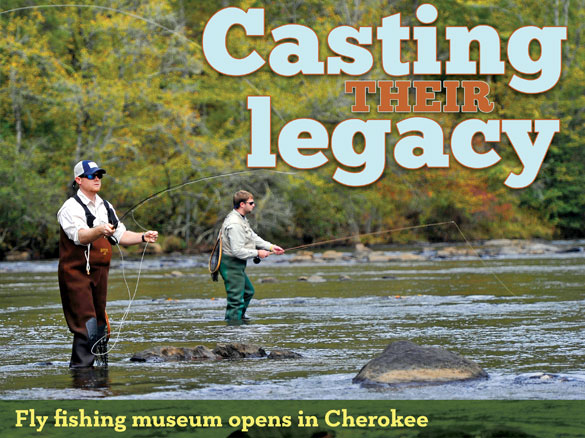 It’s been more than 10 years since Alen Baker decided, while recuperating from surgery, to pass the time by writing about what his Trout Unlimited chapter had been up to that year. Those 15 pages turned into a book, which turned into something even bigger — the idea that somebody should take it upon themselves to memorialize the Southern Appalachians’ fly fishing legacy in a museum somewhere.

SEE ALSO: A look inside the museum

“A lot of people (seemed) interested in seeing a museum, but there were no takers in terms of a location,” said Baker, who lives in the Charlotte area. “Jim Casada, a good friend, he says, ‘Go talk to the Cherokee. It’s the perfect location.’”

Casada, a Swain County native and retired history professor who now lives in Rock Hill, South Carolina, turned out to be right.

“To be honest with you, initially it was just a way to keep the chamber sustainable, but once we looked further into it we realized that Cherokee is a fly fishing Mecca already,” said Amy Parker, executive director of the Cherokee Chamber of Commerce. A nonprofit, the chamber operates on about $80,000 per year but makes only about $30,000 through membership fees. The rest comes from grants and donations.

While the chamber was initially thinking finances when hearing Baker’s pitch, as Parker started looking into it she realized that fishing is a big draw for Cherokee visitors. The reservation sells as many as 50,000 fishing permits each year, its waters irresistible to those embroiled in a love affair with the fly rod. Fishing is also an important pastime for Parker’s husband Forrest, a tribal member who’s been instrumental in the museum’s creation.

Open since June, the Fly Fishing Museum of the Southern Appalachians is now much more than a pipe dream. It occupies the back section of a recently renovated building, with the chamber and an associated gift shop taking up the front. The idea is that the museum will benefit from the automatic traffic it gets from chamber visitors, while the chamber will be able to raise money by charging admission. For now, it’s free to visit, but eventually a nominal fee will be required.

So, the chamber got the tribal government on board and received a 25-year, $1-per-year lease for an empty building on Tsali Boulevard. The Cherokee Preservation Foundation gave a $50,000 grant to pay for initial planning and marketing. A combination of grants, donations and chamber funds paid for the building renovations and exhibits. Those dollars came amazingly easily — Baker said it’s “one of the easier things” he’s raised money for — with the average donation for 65 founding members sitting at around $1,500.

Nobody is saying that the still-small museum will bring people to town all on its own. But the hope is that it will provide one more attraction that people already planning a trip will want to see, causing their visits to last longer.

“The longer they’re here, the more money they spend, the more connected they are to staying the area and contributing to this economy,” Parker said. “So whatever incentivizes people to stay longer, it’s important.”

The building is well situated to work toward that goal. It sits within an area Cherokee’s designated as its cultural district and is basically across the street from the Museum of the Cherokee Indian. Some see it as taking Cherokee one step closer to developing a core area of cultural interpretation sites.

“I kind of hoped that we would build that area up so we become a real cultural district, so people can come and hang out and spend hours on end learning about Cherokee culture,” said Bo Taylor, director of the Museum of the Cherokee Indian. “I think it’s a good thing it’s (the fly fishing museum is) there.”

All about the stories

But the fly fishing museum is about more than just revenue and visitor numbers. At its core, Baker said, it’s about stories.

“We’re preserving those old stories that would probably never get told unless someone writes a book,” he said.

Stories like those of Bryson City native Allene Hall, who with her husband Fred formed a power couple in the world of fly tying. Though her husband was generally credited with the innovative patterns devised in their home, Allene probably played a bigger role than most knew.

Then there was Mark Cathey, a legendary Smokies angler who Casada describes as “a great teller of tales,” speaking with a “quaint Elizabethan accent” that attracted listeners all on its own.

Or Sam Hunnicutt, who wore hightop boots no matter the weather — the story went he’d been bitten by a copperhead once and took pains to make sure he never had to repeat the experience. Hunnicutt “to my knowledge never worked; he just fished and hunted,” Casada said.

Like any good fish story, these characters can tend to grow larger than life as time marches on, so research has been as much a part of the museum effort as has securing exhibit donations and finding the best purveyor of foam board or brand of doublestick tape.

But worse than exaggeration would be for these characters to disappear altogether. And that’s what was on the verge of happening before the museum was born, Casada said.

“If something wasn’t done and done fairly soon, we were going to lose the knowledge, the culture and the heritage of the sport, because already there are relatively few people who have meaningful connections to the golden years of the sport,” he said.

Casada defines those “golden years” as stretching from the 1920s to the 1950s, with Baker pinpointing them more toward the later part of that period, after World War II had ended and people had a little extra time and money to fish for sport. Whichever way you slice it, the “golden years” were generally a time when fly fishing enjoyed increased popularity while pressure remained sustainable, but the Smokies were still isolated enough for techniques and equipment to evolve mostly independently of the outside world, and fishing more often had the practical purpose of putting food on the table than it does in today’s world of catch-and-release.

Casada, 73, said he’s “long enough in the tooth” to remember those days.

“There wasn’t any of the all-encompassing glorification of equipment and obsession with the tactics and techniques of things,” he said. “It was certainly for fun, but it was also an escape.”

Casada, who’s been fishing since childhood, remembers well the ritual pilgrimage to fish the Great Smoky Mountains National Park on opening day each year — these days, fishing is allowed year-round — and the nights spent around the campfire, eating fish and telling stories.

Bob Nanney, a Haywood County resident who spent his childhood in Bryson City and has been fishing for 60 years, has similar memories of fishing trips in the park. When he met Baker earlier this year and heard about the museum, it didn’t take much convincing for him to get on board. He’s been volunteering for the last several months, taking photos and cataloguing donations for the cause.

“I feel like the fly fishing heritage in this area is something that needs to be recorded,” Nanney said. “We need to document what’s been done, who did it and share the evolution in this particularly mountainous region.”

The reason for that is simple, Casada said.

It’s a work in progress. Opening day was two months ago, and the museum holds a treasure trove of stories, artifacts, photos and videos memorializing the heroes of fly fishing in the Southern Appalachians. But there’s a lot of left to do, Baker said. He wants to markedly expand his list of Streamblazers — his name for the fly fishing giants now honored at the museum — and rotate those exhibits regularly so there’s always something new to see.

He wants to develop an exhibit highlighting the link between conservation and angling.

And, perhaps most importantly, the museum needs a space dedicated to exploring the link between fly fishing and Cherokee culture.

“We were agriculturalists, but we were also hunters and gatherers,” Taylor said. “One of the best things someone ever told me was you always knew what time of the year it was by what you were eating, and fish was a big part of our diet.”

They didn’t catch those fish on a fly, however. Cherokee had their own methods of catching fish, most notably the fishing weir, a v-shaped rock construction in a stream. Cherokee would assemble upstream from the weir and thrash the water to move fish downstream, where they’d find themselves caught in the weir’s funnel point. They’d catch all kinds of fish that way, not just trout.

But when Europeans — and their fly rods — arrived to the mountains, Cherokee people took up the method as well and contributed to its development.

“We believe the yellowhammer and blackbird flies started over here in Cherokee,” Baker said of two of the most iconic Southern Appalachian fly-tying materials. “That’s to be proven though. To me, as much as we can, the museum is going to try to fill that in.”

A tool for tourism

In more recent times, fly fishing has become important to the Cherokee for another reason — tourism.

“I think playing up on the outdoors is probably a smart thing,” Taylor said. “One of the best things that we have is our trout streams.”

West of the Mississippi, Western North Carolina is the place to go for fly fishing. At least, that’s what a growing chorus of anglers is saying, and it’s a trend local economies are trying to capitalize on with efforts such as the Jackson County Chamber of Commerce’s WNC Fly Fishing Trail and the Swain County Chamber of Commerce’s online fishing guide, www.greatsmokiesfishing.com. The numbers lean that way too. Between 2002 and 2012, fly fishing sales in North Carolina increased 175 percent, with fly fishing-related sales in the South increasing from 16 to 24 percent of the national share, according to the American Fly Fishing Trade Organization.

But according to Baker, the Southern Appalachians don’t get the credit they deserve for the resources they boast.

The whole Appalachian chain from Maryland south is full of incredible places to fish, Baker said, and the Smokies, with their high mountains, clear streams, ample wilderness and incredible biological diversity, are the cream of the crop.

Casada agrees that the region is often overlooked in angling literature and added that the idea of the American West being the pinnacle of the fly fishing experience has affected even his own outlook. A fishing trip he took to Montana brought that reality home.

“I was scared to death,” he said, wondering how a “little hillbilly” like himself would hold up in the famed trout waters of the Rockies. Turned out, he needn’t have worried.

And that’s something locals should be proud of, regardless of whether they’re anglers or not. The museum isn’t just about fishing. It’s about people who loved the place they called home and put their creativity to use to connect with it through a sport they were passionate about.

“The fishing’s only part of it after all,” Casada said. “You’re fishing in an area with the greatest biological diversity in the Northern Hemisphere, and anyone who doesn’t pay attention to wildlife or clusters of butterflies or huge specimens of trees or the amazing variety of mushrooms, they are not enjoying the totality of the experience. You’re fishing in an area of incredible beauty.”

The Fly Fishing Museum of the Southern Appalachians, which is also home to the Cherokee Chamber of Commerce, is open daily and situated along U.S. 441 in Cherokee.