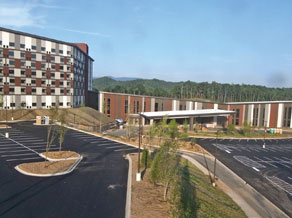 A new casino under construction outside of Murphy is coming along on schedule and on budget, according to General Manager Lumpy Lambert.

As of February, Harrah’s Cherokee Valley River Casino and Hotel was expected to cost $110 million and open sometime in August or September. The budget should hold pretty close to that number, and while the casino will likely open in the later portion of that two-month window, it’s still considered on schedule.

“Obviously there’s always little hiccups in construction, in the projects, but for the most part everything is going to schedule and going to plan,” Lambert said.

The casino has yet to announce an exact opening date, however. That’s because it’s still waiting on the Town of Murphy to finish the water and sewer system upgrades that will be necessary to accommodate the casino, Lambert said. Once the completion dates for those projects are more solid, the casino will be able to commit to an opening date.

On site though, things are starting to look a lot more finished. The gaming floor is basically done, with many games already installed — the casino’s back of house has had a temporary certificate of occupancy for more than two weeks. Contractors will likely take a walk-through of the building sometime in the next week to come up with a final list of details to finish up. The hotel is “well on its way,” Lambert said, with drywall now going in, walls painted and fixtures installed.

There has been one complication with the hotel, however. “Some dampness” has been discovered in part of the building, Lambert said, and contracting firms Whiting-Turner Contracting Company and Owle Contractor, LLC, which are partnering on the project, have hired a hygienist to see if the moisture caused any issues — such as mold. Mold has not been confirmed, however, and Lambert said he is pleased with the contractor’s efforts to ensure that any problem is identified and dealt with before the finished building is handed over to the tribe.

It’s hard to say what caused the dampness, Lambert said.

“It could have been the fact that a window wasn’t installed on a level, it could have been numerous things,” he said. “I haven’t gotten into the details of what exactly happened, but there was a lot of rain through the spring so that’s probably the contributing factor.”

The N.C. Department of Transportation’s side of the project is even further along, with the DOT slated to open the 0.8-mile access road this week. Including water and sewer line installments, a bridge over the Valley River, traffic lights and retaining walls, the road project totaled $8.23 million, about $70,000 under the $8.3 million contract amount.

Of course, once the facility is built, filling it with an adequately sizable and trained staff is the next hurdle. That part of the project is coming along well, Lambert said.

All told, the casino needs somewhere between 800 and 900 employees, with most of that pool coming from within a 100-mile radius of the site. Harrah’s held three job fairs over the past year, each of which attracted about 500 participants, so “we feel real good about the level of interest,” Lambert said.

In addition to those new to the casino industry, the new facility will also include some seasoned workers.

“We’re bringing experienced folks from Cherokee that have been part of the operation back closer to their homes, and then we still are looking at some of the external areas and bringing in experienced dealers and supervisors from markets,” Lambert said.

New employees are receiving training at the casino’s training facility in Murphy but also getting on-the-ground experience by helping with weekends in Cherokee.

“It’s a win-win,” Lambert said. “It helps the staff at Cherokee with the ability to open tables, and it helps the staff members with just the presence of a high-volume facility. That’s will pay huge dividends for us as we open up.”