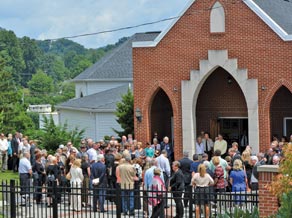 Last Friday started out just like many other workdays for Maggie Valley Mayor Ron DeSimone.

This Friday he was working on a garage addition on Campbell Creek Road, a house belonging to his best friend Jim Blyth. With more than 40 years of experience in the construction business, DeSimone was well versed in construction standards and safety — yet this routine job somehow went terribly wrong in the blink of an eye.

Lt. Russ Gilliland with the Maggie Valley Police Department said he and another officer responded to Blyth’s house about 12:30 p.m. Friday to find DeSimone, 62, lying on the ground as Blythe attempted to perform CPR on him.

“Our officer, who is certified in CPR, took over but after a while we saw it was unfruitful,” Gilliland said. “EMS was there almost immediately after us, and they literally did everything possible to save his life.”

When officers began to look into what had happened, Gilliland said they found that DeSimone was standing on the roof as a crane operator from Haywood Builders Supply was lifting up pieces of plywood to place on the truss being built on top of the garage.

“When they were sitting them up there on the second floor to unload, for some reason the materials shifted and made the trusses collapse in a domino effect,” Gilliland said.

The collapse is what knocked DeSimone off the roof. He fell about 10 to 12 feet onto the concrete before about six to eight pieces of plywood fell on top of him.

No one else was injured during the accident. Others on the scene included Blyth, the crane operator from Haywood Builders Supply and one other worker helping DeSimone.

Gilliland said the police department was looking at the incident as an accident.

The Haywood County Building Inspector was called out to the scene to investigate and OSHA, the Occupational Safety and Health Administration, also came out to inspect the scene. Gilliland said the OSHA report could take some time to be completed.