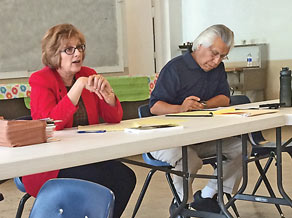 Swain County is one of only two counties in North Carolina that doesn’t have any type of animal control ordinance, but Commissioner Ben Bushyhead is hoping to change that with the help of the community.

Bushyhead and an ad hoc committee have been holding public meetings across the county to gather input from residents regarding what they would like to see on the books for animal control.

“This committee was established by the commissioners because I think we need to take another serious look at animal control for Swain County,” Bushyhead said at a recent meeting in the Alarka community.

Swain County commissioners have made several attempts in the past to address animal control needs, but nothing has been a long-term fix.

Swain County doesn’t have the infrastructure or the staff in place to handle strays, pet neglect and abuse, animal bites or feral cats. Even though the state has laws to deal with these issues, the county has no way to enforce those laws.

Sybil Mann, who is serving as the animal control committee chairwoman, said if a dog bites a child, there is nowhere in the county to quarantine the dog as required. The parent or guardian bears the burden of getting the dog and transporting it somewhere to be tested for rabies.

“There’s no assistance — it’s a public safety concern,” she said.

P.A.W.S., a nonprofit, no-kill shelter in Bryson City, is the only resource available in the county, and its facility can’t begin to meet the growing need.

“For every one animal we adopt out, we’ve got 11 more that need to come in,” said committee member Beth Cline, executive director of P.A.W.S. “We just don’t have the room.”

Mann said the county should work toward a system to partner with P.A.W.S. for pet adoptions but pointed out that a county facility should also be able to deal with quarantine needs and be able to euthanize animals when necessary.

Ellen Kilgannon, former executive director for P.A.W.S., said at the meeting that infrastructure should be the No. 1 priority. As someone who has written numerous grant applications, she said even if the county is fortunate to receive a grant to build a facility, the county would probably need to specify in a grant application how it planned to sustain the facility and staff once the grant money ran out.

“This is not just about an ordinance — we have to have the infrastructure to back it up,” she said.

Bushyhead said a majority of the input from other meetings indicated that most people agree a shelter is needed, but no one wants it in their backyard.

A majority of residents attending the meeting in Alarka agreed that something needed to be done about the stray animal problem in the county, but many were also concerned about the potential of the ordinance overreaching.

More than 30 people attended the meeting in Alarka — many of them farmers worried about how a potential animal ordinance might affect their farm animals and hunting dogs.

Bushyhead said the committee had heard concerns from hunters, farmers and pet owners at all the meetings so far. He said the committee wasn’t going to address any problems with barking dogs — that would be a nuisance or noise ordinance. He assured people that any animal control ordinance the county passes would not affect responsible pet owners.

“People who take care of their animals, they have absolutely nothing to fear from this ordinance,” he said.

Eric Jones asked which animals the committee wanted to regulate.

Mann said state statutes exempt agricultural animals from being regulated but any type of pet, which could include horses, could potentially be included in the ordinance to cover cases of neglect.

Robert Hawk, Cooperative Extension director for Jackson and Swain counties, said he receives many complaints about neglected and abused farm animals, but when he goes to check on the animals, they are fine.

“So who is going to be defining abuse?” he asked.

Mann said the definitions outlined in the future ordinance would have to be carefully crafted and examined thoroughly if and when it ever passed. And if an ordinance was put on the books, she said, an animal control officer would have to be properly trained in how to investigate reports of abuse.

Kenneth Gibson said he was concerned about what would happen if his expensive hunting dogs slipped out of their collars and were picked up on the side of the road and unnecessarily taken to a shelter. Based on input from the crowd, they didn’t think owners should have to pay any kind of fine to recover their lost dog from a shelter.

When a dog is brought into P.A.W.S., Cline said, her staff immediately posts a picture on its website and Facebook page to see if it belongs to someone first.

Residents were also concerned how the county would pay for a facility and animal control staff.

“I don’t think it will all come from taxpayers,” Bushyhead said “I think there are some grants available, but it depends on what we end up doing.”

Tommy Murdoch said he’d like to be protected from people abandoning their dogs on his property. He’s had three dogs left on his property and doesn’t have any recourse.

Committee member Jim Douthit said there were already state laws on the books against abandoning animals, and if the person doing it can be identified they could be charged with a misdemeanor or even a felony in some cases.

Hawk pointed out that residents are within their legal right to shoot a dog on their property if it is causing damage.

Murdoch said that wasn’t something he ever wanted to do.

Residents said they wanted to make sure any new ordinance is carried out with a common sense approach that won’t be a burden on responsible owners, whether they have pets or own hunting dogs.

Once a draft ordinance is created, the committee will hold another round of community meetings to allow residents to view the document and offer input.

Swain County commissioners established a committee to look into developing an animal control ordinance for the county. The committee is holding the following public input sessions for residents: