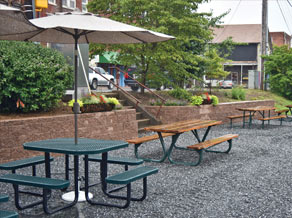 Begonias are blooming and umbrella-shadowed tables awaiting lunchtime as the finishing touches go into the newly renovated Depot Park in Sylva.

“Fixing that area and making improvements to it has been something the town has been talking about doing since the ‘90s,” said Town Manager Paige Dowling.

The area along Mill Street and across the railroad tracks from Bridge Park used to house the train depot when the rail line came through town, and it also used to be the geographic center of Sylva. As the town geared up to celebrate its 125th anniversary last October, they decided it was finally time to do something about the unsightly space that was being used for parking and garbage dumpsters.

The work began last year, when the Sylva Garden Club and Sylva Main Street Association got together $7,800 to pay for upgrades. The town put down some gravel, bought a few tables and set out some planters.

But there was still more to do.

“The renovations are essentially converting it from parking to a place to eat that’s landscaped, that looks really nice,” said David Nestler, president of the Main Street Association.

To that end, the Main Street Association donated an additional $1,400 they’d raised from October’s Taste of Sylva event to further work on the site this year. The money went to buy the umbrellas and redo the sidewalk, making it accessible to people with disabilities. Work on the sidewalk started last week and will likely finish by July 10, encompassing the sections of Mill and Allen streets that make up the perimeter of the park.

Meanwhile, the Sylva Garden Club has continued working on its landscaping plan, an effort that will likely be ongoing as volunteers are able to get out and funding become available.