Ghost Town will remain closed for 2015 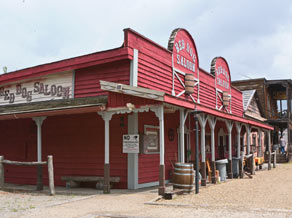 Despite aiming for a July opening, Ghost Town in the Sky will stay closed for the entire 2015 season.

The mountaintop western-themed park in Maggie Valley was reopened in 2012 after Alaska Presley bought it for $2 million out of foreclosure. She has spent the last three years working on renovating and upgrading the 60-year-old park.

Presley, who was one of the original investors in Ghost Town, has spent millions more on new electrical, plumbing, constructing an evacuation road under the chairlift, and trying to pump city water more than 3,000 feet up Buck Mountain. Each year she has been faced with a new challenge and somehow managed to get open by July 4 weekend, but the challenged proved to be too much this year.

She had announced in June that the park would be open July 2. She then pushed it back to July 15. Then pipes busted during a pressure test to see if the water would make it up the mountain. That was the final straw, forcing Presley to announce that the park would remain closed for all of 2015.

“We have spent more than half a million dollars installing 5,000 feet of water lines throughout the mountain to replace aging and dry wells,” she wrote in a press release. “I have now been informed that additional measures must be taken in order for the new lines to pass pressure tests and this will not be completed for several more weeks. Without water we are unable to open to the public.”

Presley expressed disappointment, stating that her staff had spent the last month preparing the Western town and the shops for summer guests. But with several more weeks of work needed to repair the waterlines, she said it wasn’t cost effective to only open for a month or two.

Even if the waterline issues could be addressed, Ghost Town still hadn’t passed state inspections for the few kiddie rides and the chairlift. As of last week, the park hadn’t even requested inspections from the state. State inspections on the rides held up the opening of Ghost Town for the past two years.

In 2013, the Department of Labor informed Presley she would need to construct an emergency evacuation road under the chairlift. That project cost $100,000, but ongoing erosion problems and mitigation efforts have added to that amount.

The construction project disturbed more land than anticipated, which resulted in violations from the Haywood County Erosion and Sediment Control office. As of late June, County Erosion Control Director Marc Pruett said Ghost Town was still working on stabilization efforts on the road. He said the Erosion and Sediment Control board has assessed a $53,000 fine for Ghost Town, but it could be adjusted after the final product is reviewed.

“There have been some serious maintenance issues on it since it was constructed, but it’s looking so much better than it has,” Pruett said. “I’m cautiously optimistic — (Alaska’s) got a good contractor to come in and he’s being paid. We’ve convinced them to work with engineers in tandem with the contractor.”

Presley said Ghost Town would be completed and ready to go for the 2016 season and said people could stay updated by visiting the park’s Facebook page.

“We have been working on re-branding Ghost Town into a family destination, taking it from the 1960s to the 2020s, and although it may seem like little has been done, I assure you, you must first complete a solid infrastructure in order to build a memorable destination and we have almost completed that,” she said.

She also said the park would have new activities next year, including improved zip lines, more live entertainment and converting the old condemned roller coaster into an “AirWalk” — a harnessed climbable course.

The announcement came a little too late for some visitors who had already made plans to visit Ghost Town on July 4 weekend.

“So disappointed we will be in Maggie Valley the weekend of the 4th and my grandson has been so excited to go there! We used to go as kids and I wanted him to see the shows! Bummer!!” Annette Darling commented on Facebook.