Maggie moves forward with or without Ghost Town 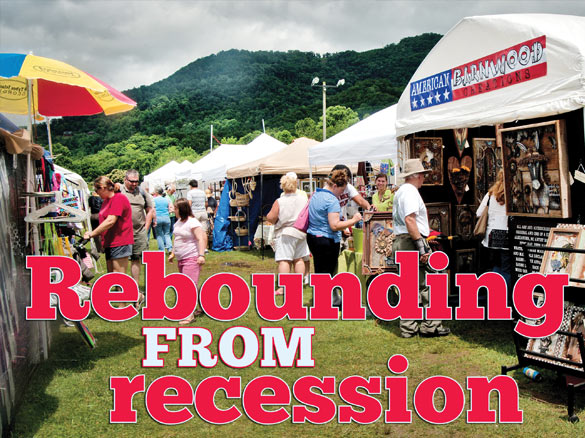 Illuminated neon lettering indicated full occupancy on many of the hotels in Maggie Valley during the Fourth of July weekend.

“No Vacancy” signs translate into dollar signs for accommodation owners as well as all the other businesses in the valley. Despite Ghost Town in the Sky not opening this year, Soco Road traffic was bumper to bumper, every parking lot was packed and tourists lined the sidewalks on Saturday evening waiting for the fireworks to begin.

Ghost Town, a mountaintop western theme park in Maggie Valley, was once the driving force behind the town’s summer economy. The park thrived in the 70s and 80s as businesses throughout the valley reaped the financial rewards, but a changing economy and perhaps a changing world where children are more fascinated with their smartphones than cowboys and Indians has made the park lose its broad appeal.

With the uncertainty of whether Ghost Town will ever be the same draw it once was, the valley has tried to diversify its tourism base. It finally seems to be paying off.

According to Lynn Collins, executive director of the Haywood County Tourism Development Authority, revenue from room tax collections in Maggie Valley has increased 15 percent since last year. That increase is only based on revenue reports through April because the reports run two months behind. Collins won’t have a clearer picture of Maggie’s overall summer tourism season until the fall.

“A lot of accommodations have said they had a record May,” Collins said. “We had the Shriners (conference) in June and we’ve had good attendance at other events, so I’m really hopeful for June numbers.”

While some business owners would like to see Ghost Town open, they say they will be just fine without it. Beth Reece, owner of Maggie Valley Inn and Rendezvous Restaurant, said her guests visit Maggie Valley for a host of reasons.

“People still ask about Ghost Town — and I’m disappointed they didn’t get open this weekend — but I don’t think anyone came specifically for that,” she said about Fourth of July weekend. “I’d love to see it open again — it might make people stay another night, but I think we have a lot of other things people can do until that happens.”

That wasn’t always the case. When original owner RB Coburn closed Ghost Town in 2003, the entire town of Maggie Valley could have been mistaken for a ghost town. The park reopened again in 2007 but floundered once again under a different owner.

Even though Alaska Presley bought Ghost Town out of foreclosure in 2012 with the promise of restoring the park to help the valley’s economy, the town and local businesses had learned their lesson — not to put all their eggs in one basket.

This is the first year Ghost Town won’t be open for the summer season since Presley — one of the original investors when the park opened in 1965 — bought it. This year, Ghost Town was planning for a July 2 opening but setbacks trying to pump city water up the mountain prevented the park from opening (see accompanying story).

Even though Ghost Town has been open the last few years, it hasn’t brought in the number of visitors it once did. Many who have visited Ghost Town to relive their childhood experiences with their children and grandchildren have been disappointed in its current condition.

Without the roller coaster and other rides that were once running, little is left on the mountain except Western Town, which features gunfights and can-can dancers in the saloons. During its glory days, Ghost Town could easily bring in 400,000 visitors each year and Maggie Valley businesses were prosperous.

Sonja Michels, owner of Creekwood Village Resort in Maggie Valley, said many of her guests over Fourth of July weekend thought Ghost Town would be open and were disappointed when they arrived to find it still closed.

“It would be nice if Ghost Town could get going again,” she said. “I have a lot of older retired customers — they were brought here by their parents and they want their kids to see what they saw with the can-can girls and the gunfights. I hear that from a lot of families.”

Having been in business in Maggie for 34 years, Michels can remember when a closed Ghost Town had a large impact on the valley. The economic downtown in 2008 and ongoing financial troubles with Ghost Town reverberated throughout the valley. Hotel rooms were empty, streets were bare and businesses started shutting their doors.

“It’s never going to be like it was in the 80s and 90s when Ghost Town was open,” Michels said. “That was pay day for me but it went downhill from there. I still get my regular customers and I’ll be OK, but I will never see the business I saw then.”

What are they coming for now?

At one time, Ghost Town was all Maggie Valley had and when businesses could no longer rely on the cash cow every year, they had to rethink their strategies. It’s taken some time, but slowly and surely, Maggie is rebounding from the recession.

Maggie Valley has the Blue Ridge Parkway and the Great Smoky Mountains, Cataloochee Ski Area, Cataloochee Ranch, Wheels Through Time Museum, the Maggie Valley Festival Grounds, the Stompin’ Ground and the unique shops and restaurants that have survived the economic downturn.

“We have the most visited national park in the country, and Maggie Valley has a charm to it you can’t find anywhere else,” said Sue Pendley, owner of Maggie Mountaineer Crafts. The shop has been open in the valley for 65 years, and she said she’s been fortunate to see about a 20 percent increase in sales over the last year.

“We’re never down because we’re here everyday. Anybody in the valley that’s not up, it’s probably their own fault,” she joked. “I don’t think I’ve ever seen this many people over the Fourth of July weekend.”

Pendley said her husband managed Ghost Town for 13 years when it first opened — but that was before there was a Dollywood or a Carowinds.

“It was unbelievable the amount of people we had here then,” she said. “We all wish Alaska the best — there’s a lot of people that would love to see it open for everyone’s sake.”

While Pendley said her customers are families and multiple generations that return to Maggie Valley each year, the motorcycles crowds coming to the valley may be close to surpassing the family niche of tourists.

Being near the Blue Ridge Parkway and having Wheels Through Time Museum in Maggie has been a major boost to the tourism economy. Motorcycle enthusiasts come from all over the country to visit the museum, and its popularity has skyrocketed in the last few years since museum curator Dale Walksler’s reality show began airing on Velocity TV. “What’s in the Barn?” follows Walksler around the country as he searches for lost treasures to bring back to the museum in Maggie.

The Holiday Motel is one hotel in town that usually has the “No” illuminated on its vacancy sign throughout the summer. Co-owner Gabi Edwards said it’s because of motorcycle tourism.

“We’ve been doing well because we’ve established our motorcycle clientele,” she said. “We have a lot of big groups and many repeat guests — it’s gotten to the point we don’t even need to market it anymore.”

Unlike some of the other longtime business owners, she and her husband Rob Edwards bought the hotel eight years ago — at the beginning of the recession and the decline of Ghost Town. So their business has never relied on the park opening or not.

“Things were not great then but it’s getting better and better,” Gabi said. “But it’s because we work at it and take care of our people and it’s paying off.”

Reece said Maggie’s uptick in tourism is a result of a combination of things, including popular and well-organized events at the festival grounds, Wheels Through Time and motorcycle tourism in general, and better cooperation among businesses and tourism organizations.

“We’re doing a better job of advertising, and that’s what happens when people work together to market Maggie as a destination,” she said. “Maggie’s not as fragmented and split as it used to be.”

The reopening of Eaglenest this summer has also sparked some interest in the valley. The state-of-the-art entertainment facility was built in the heart of the valley in 2002 and brought in big-name concerts before closing down in 2008 when the economy tanked.

Danny and Sandy Blitch, owners of Skis and Tees and Scrappin in the Mountains Coffeeshop, said they heard many people over the holiday weekend say they came to Maggie to hear American Pride — a Statler Brothers tribute band — perform at Eaglenest.

Danny Blitch said tourism was definitely improving even though the town is not back to where it used to be when Ghost Town was in full swing. But he has hope that people will keep coming back to Maggie Valley for other reasons.

“People come to Maggie Valley because it’s a place to relax,” he said. “They can go to Cherokee or Gatlinburg during the day but come back to Maggie and enjoy our lower room tax and hospitality.”

Other signs of recovery

New tourism-related businesses popping up in Maggie are another good indicator of a recovering economy. There are new restaurants, antique shops, bakeries, coffee shops and the valley’s first whitewater rafting company.

Briggs Gilliam opened Maggie Valley Expeditions just a couple of weeks ago, offering guided rafting and fishing trips on the Pigeon River. The Western Carolina University alum said he spent a lot of his college years in the area and decided to bring his 17 years of experience in raft guiding to Maggie.

“I saw a niche here that no one else is pushing for,” Gilliam said. “I want to get people to raft the Pigeon and make it more convenient for people in Maggie Valley.”

Teresa Smith, executive director of the Maggie Valley Chamber of Commerce, said she is a little surprised and excited about all the new businesses opening in town.

“When you start naming all the new businesses that have opened in Maggie Valley recently you realize just how far we have rebounded from the recession,” she said.

“More and more folks are looking for somewhere to visit where they can escape from the hustle and bustle of life, sit back and exhale.”

Maggie has also had its fair share of restaurants, shops and hotels close their doors, but Reece and Collins say thats OK. With fewer hotel rooms in the overall inventory, Collins said the accommodations that are still open could begin to charge a little more and put that income back into upgrading and improving their hotels.

Reece said when the pie has to be divided in less pieces, every gets a bigger slice.

“The pie is about the right size right now,” she said.