Maggie mayor may have competitor in election 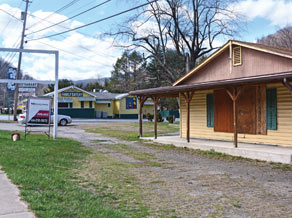 The political dynamics in Maggie Valley have definitely changed in the last two years.

Board of Aldermen meetings are no longer a free for all — no arguing or fist pounding from board members and no yelling and disrespectful behavior from the audience.

Perhaps the lack of drama is why the meeting room is no longer packed full of people waiting to voice their opinions; or perhaps residents are happy with the direction the town is going and don’t feel like they need to interject.

Jasay Ketchum, a regular at the monthly board meetings, says people aren’t participating in the meetings anymore because the board doesn’t take their input into consideration before making decisions.

“We need to be on board and up front with everybody,” he said.

Ketchum also said decisions are being made behind closed doors instead of at the public meetings. He said the board goes into closed session too often and that too much discussion was going on at the board’s monthly workshops, which are held at 9 a.m. the Wednesday before the regular meeting.

“Why go to the meetings? It doesn’t do any good,” he said. “I didn’t realize how much they were doing there at the workshop meetings — I’m going to make a point to start going to those.”

These are a few of the reasons why Ketchum is seriously considering running against Mayor Ron DeSimone in the November election. Ketchum, a retired X-ray technician, has lived in Maggie Valley for 25 years and has been attending town meetings for just as long. He has complained to the board on several occasions about his subdivision not receiving services even though Woodland Village was forced into annexation years ago.

DeSimone was elected as mayor in 2011 with the promise of giving the residents and business owners of Maggie Valley a voice after ousting longtime mayor Roger McElroy. He has supported and helped implement several important changes in the town and plans to run for a second term to keep the momentum going. While he feels like the town is moving in a good direction right now, DeSimone’s first couple of years in office were rocky.

It wasn’t until the 2013 elections in Maggie Valley that the tide began to turn toward more peaceful politics. After a board resignation in 2012 left the aldermen without a fourth member, every important vote taken ended up in a 2-2 split vote with DeSimone and Alderman Saralyn Price on one side and Aldermen Mike Matthews and Phillip Wight on the other. The deadlock prevented the board from appointing someone to fill the vacancy and the stalemate continued for another year until the election.

Matthews’ loss meant that Wight — on most occasions — was alone in his dissention. Wight doesn’t have a problem with speaking up when he disagrees with the board, but his isolation is also making him think hard about whether he wants to run for re-election this year.

“You start to feel like you’re not making a difference,” Wight said. “So I’m discouraged about running again.”

Since Banks ran in 2013 to complete the unfinished term left vacant by Phil Aldridge, she will have to run again this year for a four-year term. She said she is considering running again but hasn’t made up her mind yet. So far, no other names have surfaced as potential candidates.

DeSimone and Wight aligned themselves during the election four years ago, but Wight is now one of DeSimone’s most vocal critics.

Wight agrees that Maggie Valley is moving in a positive direction but said it’s despite DeSimone, not because of him. When asked if he had considered running for the mayor’s seat, Wight said he had thought about it but didn’t think he had the available time needed to devote to the office.

DeSimone said being mayor does require a big time commitment. He serves on seven boards, including the Haywood County Economic Development Commission where he heads up the effort to expand broadband capabilities in Haywood County.

DeSimone said he doesn’t dwell too much on whether everyone gets behind his ideas initially. In his experience, the support usually comes along as an idea turns into an actual plan that can be implemented. For example, he said he had a difficult time getting people on board for a winter festival in Maggie Valley, but once he got a committee going, he said the support followed and the inaugural WinterFest was a huge hit that will hopefully continue to grow.

“In Maggie Valley we’re trying to change a mindset,” DeSimone said. “People may not initially get behind it, but when you can start to show them we’re moving in a positive direction, it’s starting to get momentum.”

Right now the focus is on effort to create a town center. The board spent $25,000 to hire an engineering and design team to facilitate the town center planning process. Maggie Valley will never be able to create a typical downtown like Waynesville, but the idea is to create an aesthetically appealing town center that is pedestrian- and biker-friendly from the festival grounds to town hall.

“That’s a joke,” Ketchum said of the town center plan, adding that the concepts being presented were too expensive and unrealistic considering the four-lane highway running through the center of town.

The town has attempted to create these types of master plans before, but nothing ever came of them because of a lack of funding. DeSimone said this time would be different.

“Several people have mentioned that a master plan has been done before, but on the other hand, we probably have the best team on board right now to make it happen,” he said.

• For municipal elections in Haywood County, candidates may file for office beginning July 6 through July 17

• Visit the Haywood County Board of Elections Office between 8:30 a.m. to 5 p.m. Monday though Friday