Local libraries report that more people are streaming through their doors as a direct result of the recession. Area residents are increasingly heading to the library rather than doling out dollars for books, CDs and DVDs, as well as newspapers, magazines and Internet subscriptions.

“They look for the free option,” said Jeff Delfield, librarian at the Marianna Black Library in Bryson City. “Why buy a brand new John Grisham book for $25 to $30 when they have it for free at the library?”

Libraries have also seen more attendance at workshops on topics that are especially relevant during a recession, such as tips on writing an effective resume or searching for jobs online.

Employees at the Marianna Black Library were delighted to see a record 466 people walk in on a single day in July. A week later, the newly instituted record was broken again with 476 visitors in just one day.

Dan Sikorra, a Bryson city resident and realtor, is one frequent visitor to the Marianna Black library. Sikorra said he visits the library two or three times a week to catch up on latest news in The Wall Street Journal, as well as other periodicals and magazines. 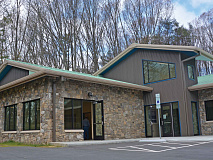 Sikorra has always enjoyed making the walk over to the library from his office to get a much-needed break, but with the weak economy, Sikorra said he is finding himself at the library more than ever.

“Before, I used to not be able to leave the office,” said Sikorra.

Though some librarians might be happy to see more people like Sikorra coming in simply because of a passion for their calling, there is definitely a downside to libraries’ success.

“It’s a higher burden on the staff,” said Delfield.

While for-profit businesses can add on more employees with an increase in clientele, libraries just have to make do with the staff they already have.

Thankfully, Swain County commissioners did not cut the library’s budget this year, but they did not provide the library an increase to accommodate its growing number of patrons either.

Libraries across the Fontana Regional Library System — which represents Jackson, Macon and Swain counties — have seen their door counts and circulation increase in the past year.

The total number of people visiting those libraries is up about 6 percent from the previous year, while 12 percent more items were checked out this year.

Robert Busko, library director for Haywood County Public Library, said libraries in that county have yet to monitor door counts; however, there are noticeable signs of a rise in clientele.

“Our computers are used virtually the entire time we’re open in all our branches,” said Busko. “Parking is a continued problem for us. We are much busier than we have been.”

Busko said Haywood libraries are doing their part to help ease the effects of the recession.

“We changed the circulation period from two weeks to three weeks,” said Busko. The change was made partly to allow patrons to save on gas and ironically, make fewer trips to the library.