Everything but the kitchen sink: A conversation with Frank Solivan 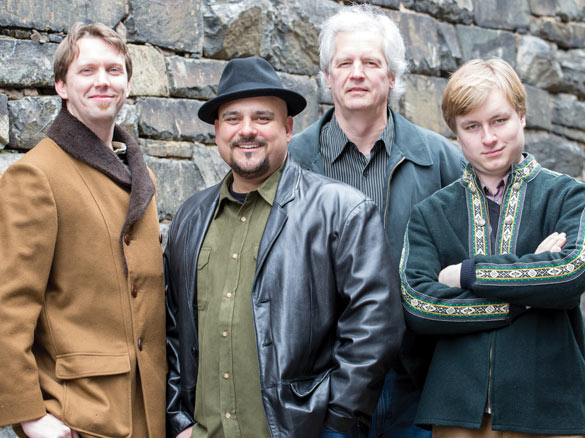 Standing on the red carpet at the International Bluegrass Music Association awards in Raleigh last fall, I found myself in the midst of the biggest names in the genre. To the right were The Gibson Brothers, Sam Bush and Claire Lynch, to the left Bela Fleck, Rhonda Vincent and The Del McCoury Band — a who’s who of string music.

Suddenly, out of the corner of my eye, appeared this barrel-chested man, with a shaved head, three-piece suit and pristine flat-brimmed hat. He looked out of place compared to the Nashville-esque beanpole thin, sometimes bearded, sometimes longhaired nature of his counterparts. He looked more like a mobster than a musician, more like a Jersey boy than a southern picker.

His name is Frank Solivan, and he plays some pretty damn fine bluegrass.

Alongside his band Dirty Kitchen, Solivan has been making a name for himself in string circles far and wide. In 2014, they were named IBMA “Instrumental Group of the Year,” only to recently pick up a Grammy nomination for “Best Bluegrass Album.”

Based out of Washington D.C. (by way of California, Alaska and Nashville), Solivan represents a new era in bluegrass music. Sure, he grew up with the sounds of Bill Monroe and Flatt & Scruggs, but he also found inspiration in the music of The Grateful Dead and Tower of Power, too. It is a modern-day attitude and passion, a next step in bluegrass that ideally compliments the progressive road the sound has taken since the experimental days of Old & In The Way and New Grass Revival.

Smoky Mountain News: You grew up in California and Alaska. How did you get into bluegrass being from out there?

Frank Solivan: I grew up going to bluegrass and acoustic music festivals on the west coast. My mom used to play, she was a singer and played guitar. I had some uncles that were concert cellists and violinists. My dad was also the ninth of 10 kids, and his mom and her sisters used to tour around in vaudeville acts, where they were acrobats and musicians.

SMN: So, entertaining is in your blood then?

FS: I guess. [Laughs]. At our family reunions, we’re really into good food and good music. We’d be playing music, take a break for a meal then whip out the instruments again afterwards. We have so many musical influences in our family. I mean, my Aunt Wilma and her husband are registered in the Western Swing Hall of Fame, and there are country, blues, jazz and rock players in our family, too — we’re music lovers more than anything.

SMN: How did you get your start in bluegrass?

FS: My grandmother played mandolin and fiddle, and she passed away when I was in kindergarten. So, growing up we had all those bluegrass instruments around the house. My dad played banjo and guitar also. I found a fiddle one time in the closet. It had a few strings on it and the bow didn’t have any hair, but I started messing around with it. And I remember going to the Strawberry Music Festival when I was a kid, watching anything from Jimmy Martin to New Grass Revival — there was a lot of bluegrass influences.

SMN: Your sound is definitely bluegrass, but it also blurs a lot of genre lines.

FS: I pay homage to all those bluegrass greats — they weren’t trying to be one thing, they were trying to do their own thing to set themselves apart from other people. Bill Monroe took all his influences to make his own sound, then people tried to copy that, then Flatt & Scruggs did their own thing. I think the energy of bluegrass music, the underlying thing I like about it, is trying to do your own thing and no conforming to anybody. You’ll never hear the same intro or ending on any of our songs. For us, it’s about coming together with all of our influences to make a sound, and not a particular sound, but it’s us and it doesn’t sound like anybody else.

SMN: What’s it like for you, onstage, right in the middle of a heated jam?

FS: We play the song, but there’s always room for music exploration and instrumental virtuosity, adlibbing or trying to be inventive within the melody. We’ll throw in some freeform stuff out in the middle of the song, but we always look for that exit strategy. We know what gets us to that point of jamming out, but we need that exit strategy to be able to get back to the song. We like to let it hang pretty loose and have a lot of room to explore. When you’re soloing, you’re all hanging out their on the edge of the precipice, and the audience is hanging out there with you wondering, “Is he going to make it?” “Is he going to fall?” “Oh, he made it.”

SMN: Why is it important that bluegrass and traditional music survive and thrive in a modern world?

FS: Because this music is about wood and strings, about human touch, vibration, the ebb and flow of sound, pressure, tension and release, and you just can't get that from a machine ‘making music.’ There is something so special about a real human voice and real instruments making a connection with an audience, where the energy in the room swirls around, like a back and forth circle of emotion. Seeing a band live, there’s something to be said about the mass psychosis, where the group feeds off the audience, audience feeds off the group, and it becomes this sort of cyclical thing, full of climaxes, lows and highs. That’s what we want to do, and that’s what I want to see when I go to live music — I want to be excited.

A benefit for Head Start of Haywood and Jackson counties, gates open at 9 a.m. Saturday and noon Sunday. The festival itself showcases the official North Carolina state dog — the Plott Hound. The event will also feature an array live dog competitions, craft and food vendors, children’s activities, and more.

The music lineup is as follows: