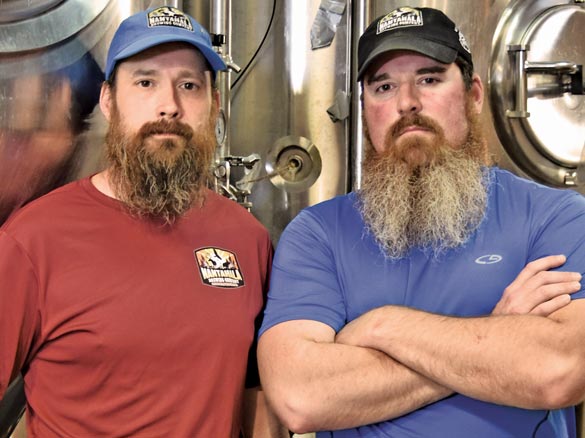 It’s a recent Saturday afternoon at Nantahala Brewing Company in downtown Bryson City. With bluebird skies overhead and the mountains of Southern Appalachia in the distance, brewery co-owner Joe Rowland scans his surroundings. There are children and dogs running around the front porch, with folks from Asheville, Atlanta, Charlotte and everywhere in-between raising their glasses high to another day in paradise.

It’s a scene Rowland has always imagined for his business, one that has been five years in the making. He shakes his head in awe, with a smile ear-to-ear.

“The last five years have felt like 10,” he laughed. “But, it’s been pretty amazing — we’ve made progress and great beer.”

On May 15, Nantahala will host its “5th Anniversary Party,” an event that signifies more than just hundreds of passing days on the calendar. Rather, it is a testament to a brewery and brand that is the epitome of the small town — the last, wild outpost to the Great Smokies — that it represents. It’s more than simply making craft beer, it’s about taking pride in your product, your community and your never-ending quest to achieve your dreams, come hell or high water.

“We’ve worked really hard. We held steady for awhile and grew incrementally,” Rowland said. “We saved our money and pushed ahead, putting ourselves in a position to where we are now, where we could execute getting from one small point to a bigger one correctly.”

Where it all began

For years, Rowland worked in marketing and operated a kayaking outfitter in Charleston. Surrounded by the Great Smoky Mountains National Park, Bryson City mesmerized him and his colleagues whenever they would visit the region. The brewery was launched in 2010 in an effort to bring together two passions — craft beer and the great outdoors.

“We fell in love with Bryson City and kept trying to find ways to live here,” Rowland said. “So, a handful of us got together and started the brewery. It’s great to be involved in an industry that people appreciate and are happy when they leave, which that in itself is rewarding.”

Besides the brewery’s own fascination and enjoyment of the nearby Appalachian Trail, brewmaster Greg Geiger was actually hiking the trail when he first crossed paths with Nantahala Brewing. Geiger was living in Knoxville in 2011 and decided to do a 500-mile trek through the Southern Appalachian portion of the route. A friend of his who worked at the brewery coaxed the 17-year homebrewer and industrial engineer off the trail to help volunteer at a craft beer festival. Geiger felt a kinship with the brewery and the rest is history.

“This is my playground to toy around with new things,” he said. “There’s so much you can do to experiment, to push the boundaries and make new flavors, new things you’ve never tried before, and we have that freedom here to do just that.”

And over the last five years, Nantahala Brewing has been hard at work, creating unique, delicious craft beers. The name of the game is consistency and quality above all, with the company pulling in new fans of its products everyday, many of which are craft beer judges, as seen by the dozens of competition medals hanging on the brewery wall. At the recent Hickory Hops “Carolina Championship of Beers,” Nantahala Brewing took home 17 medals (four of which were gold).

“As long as the consumer is seeking out high quality, we’ll be making great craft beer,” Geiger said looking at the medal cases.

From its first batch of craft beer, Nantahala Brewing has always kept a keen, steady vision as to what it wants its brand to be. It’s about making smart moves, taking calculated risks, and realizing that long-term success is a slow burn, not a flash-in-the-pan to make a quick buck strategy. It’s the idea and trajectory of long-range goals with short-range milestones, where you realize the only person you need to compete with is yourself.

In its first year of operation, Nantahala Brewing had an output of 400 barrels. In 2015, the end-of-year barrel numbers are expected to fall somewhere around 4,000 to 5,000. These days, they brew on a 10-barrel system with two 30-barrel (and four 10-barrel) fermenters.

“I wasn’t sure we’d ever get to these kind of barrel numbers, with all the challenges we’ve faced, setbacks experiences, the way the business has evolved, trying to figure out where we’re going to go, how big we want to be — and we still debate that,” Rowland said.

“And we’ve got the facilities and equipment presently online to increase our capacity at 150 percent,” Geiger added. “We’ve also got two more tanks coming in to be installed.”

“It’s a moving target,” Rowland countered. “Each time we sit down and talk about these numbers, a few days later I buy more tanks.”

Amid those growing numbers, and expectations, Rowland openly admits it can be tough to not adhere to the temptations of cranking up the production capacities.

“We do have opportunities right now to go way bigger than I’ve ever imagined we’d go, and I’ve struggled with that a little bit because it’s tempting, very tempting,” he said. “You have to realize it’s not just about you, it’s about the town and everyone who works for you. If you go way, way big, now you’re talking about changing the landscape of Bryson City, to change the course of what happens here.”

Taking the next step

Rowland points to his friends and mentors at the wildly popular Russian River Brewing Company in Santa Rosa, California as being prime examples of how to make your business not only successful, but also healthy in its growth, intent and purpose.

“It’s all about quality and consistency, and [Russian River owners] Vinnie and Natalie Cilurzo taught us about how to control supply and demand, to make sure your product is being branded and sold correctly,” he said.

And with that sentiment, Rowland noted the recent deal Nantahala Brewing signed with regional distributor Budweiser of Asheville, a deal that will put the Bryson City craft beer in restaurants, pubs and on store shelves in Buncombe, Haywood, Henderson, Polk, Madison and Transylvania counties. The extensive distribution network was originally created by Anheuser-Busch (Budweiser), with Budweiser of Asheville an independent entity these days, one that teams up with breweries around Western North Carolina to promote local products. Nantahala Brewing will still personally distribute its craft beer around Jackson, Swain and Macon counties.

“One of the big reasons we decided to go with Budweiser of Asheville is because we’re not in a position, nor do we desire to be, to self-distribute packaged products like six-packs and 12-packs,” Rowland said. “Those are product lines we have always wanted to provide, and now we can with this deal.”

Though Rowland won’t go into specific numbers about the deal, Nantahala Brewing’s distribution rights were sold for a “substantial amount.” Instead of having to seek new investors for capital, the recent cash flow will allow the brewery to hire more full-time brewers and employees, and also expand its marketing reach and physical business onsite in Bryson City (more offices and equipment).

“For us, it’s always been part of our plan — to develop our brand to make it valuable enough to not have to seek outside capital,” Rowland said. “With this money, we’re now able to take everything to the next level. Having 12-ounce bottles? That’s incredible, and expensive, when you take into account the cost of bottle caps, labels, case cartons and transporting the products.”

“For me, it means more work in the immediate future,” Geiger chuckled. “But, it also means more brewers who I can teach, help and oversee, which will then free me up to be more involved in the beer itself and recipe development, rather than the day-to-day brewing.”

Back on the front porch of the brewery, Rowland pours himself one of Nantahala Brewing’s signature selections — the “4-Foot Drop Pale Ale” — and takes a seat underneath the sunshine. He sips the heady brew and once again observes the endless mountains in front of him, the endless stream of friends and the curious alike milling around.

“It’s getting exciting, really exciting,” he grinned. “It was a lot hard work to get here, and it’s still going to be hard work moving forward — I can’t wait to see what’s next.”

The Nantahala Brewing Company “5th Anniversary Party” will be held from 4 to 11 p.m. Friday, May 15, in Bryson City. Alongside a special anniversary craft beer release (on tap at 4 p.m., bottle sales begin at 6 p.m.) and other festivities, there will also be live music at 8 p.m. by Circus Mutt (rock/roots). Free to attend. www.nantahalabrewing.com or 828.488.2337.