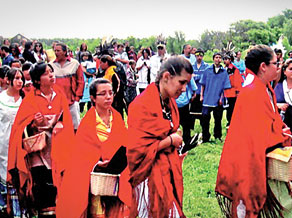 It was a century ago that Beverly Kiohawiton Cook’s relative was taken from his family and shipped off to Carlisle Indian School in Pennsylvania. Those years at school, days of travel away from family and forbidden to use native dress and speech, were traumatic.

The tale is more than just an anecdote in the family history, said Cook, an elected chief of the Saint Regis Mohawk tribe in New York.

“He was very handsome, but he was a beast,” Cook said. “He had a large family, and he raised the children the same way he was raised at the boarding school. There was a lot of violence in the home.”

One of those children recently died, succumbing to disease resulting from the drug problem he developed at an early age, a way to cope with violence in the home and a rape that went unpunished. At his death, he wasn’t even old enough to qualify for Social Security.

“We have that kind of trauma going on, and to me that’s violence,” Cook said. “To me that’s a trigger that was pulled back when he was 5 years old. It took him down decades later, but it will take you down.”

So was there any way to avoid that ending to the story? Is it possible to keep the opening chapters of such tales from being written?

Speakers and discussions throughout the three-day Native Health Conference, the second annual meeting of the Smithsonian Institute’s Native Health and Culture Workgroup, attempted to answer those kinds of questions, or at least to find the smaller questions propping up the big ones. The conference, held at Western Carolina University, brought tribal leaders from Indian land across the country as well as scholars, researchers and representatives of federal agencies.

Health was the conference’s headline focus — which issues are most pervasive in Native American communities, what causes them, how to address them — but the discussion was remarkably free of statistics and science-ese. In fact, someone who stumbled into the room unaware of the conference’s title might have mistaken the event for a forum on cultural recovery rather than an exploration of health issues.

That’s because health and culture are not separate. Their fate is bound together.

Take the issue of drugs, for example.

“All these programs, all these other drugs to help you overcome drugs are good. But because of who you are, we have something better and that is traditional healing, if you will just keep in mind you were Cherokee first,” explained Myrtle Driver, cultural and traditional specialist for the Eastern Band of Cherokee Indians.

The same goes for all native cultures, and for all health battles.

Many of the most pervasive health issues on Indian reservations — drug use, obesity, domestic violence — have historical origins, resulting from patterns borne of divorce from culture, conference speakers said.

“Everything that I’ve encountered and everything that comes out of the speakers in this session deals with the destructive nature of devaluing one’s culture, so that’s being done through colonization. That’s being done through being told they’re not allowed to speak their language, that’s being done by being sent off to the boarding school,” explained Gwen Isaac, curator of North American ethnology at the Smithsonian Institution’s National Museum of Natural History. Isaac was instrumental in organizing the inaugural Native Health Conference, held last year in Washington, D.C.

Of course, those things all happened a long time ago. But the effects trickle through the generations. Cook spoke of her late husband as case in point, referring to the Adverse Childhood Experiences study, an ongoing project by the Centers for Disease Control and Kaiser Permanente that looks at the effect of traumatic experiences in childhood on later life.

“The higher your ACE score, the higher your chances are that you’re going to be depressed, alcoholic, that you will be raped in your lifetime or enter into another abusive relationship,” Cook said.

Thus, the abused child becomes the abusive husband, fathering children of his own who then learn that same abusive template for a home.

“We have an ever-increasing problem, and where do you step in to make a difference?” Cook asked.

First of all, she said, by recognizing that the source of a medical problem may not be strictly medical.

For instance, Cook said, when treating an overweight person, “Maybe someone needs to talk to that person and find out why you can’t get a handle on your eating. What happened to you?”

“Those kinds of questions I think really get at the root of what we need to do with our people,” she added.

A person’s exposure to struggle begins in the womb, Cook said, which is why it’s so important for native communities to emphasize prenatal care. The clinic she spearheaded in her own homeland, Centering Pregnancy, did just that, giving care that begins with the understanding that most women who come in are dealing with some kind of trauma. The clinic uses dimmed lighting, music and massage to create a comforting atmosphere and puts the mothers-to-be in groups of other women with similar due dates.

“I would love for someone to say, ‘This is the way prenatal care should be given’ and teach it in medical schools so everyone knows what it means and how to do it, and don’t fund anything else,” Cook said.

But in a way, medical intervention is little more than a finger in the dyke, a last-ditch attempt to protect a single hole from the oncoming flood as hundreds of others pop open all around.

The thing to do is rebuild the dyke — to instill native culture into the upcoming generation.

“It’s our young people who are sitting there speaking our language, singing our songs and conducting our ceremonies,” said Louise MacDonald Herne, Bear Clan Mother in the Mohawk Nation. “I always say, are we ready? Are we ready, because we stand at the door of tremendous social change and revolution. Are we ready to usher these young people in?”

The Mohawk have made great strides in doing so. The nation is in the tenth year of its Ohero:kon ceremony, a word that means “under the husk” in the native language. The ceremony is a 20-week rite of passage for teenagers, culminating in days — the exact number depends on the number of years the teen has participated — spent in the woods without food, water or human contact. During the weeks leading up to the fast, the teens participate in a variety of culturally-based activities to prepare themselves for the spiritual journey. It’s an undertaking that involves the whole village, and the teens come out the other end with a greater awareness of who they are and what it means to be Mohawk. The experience empowers them to go on to become leaders in the tribe rather than statistics attesting to the woes plaguing their community.

“In our communities we’re being programmed to death and we’re over-institutionalized,” MacDonald said. “We have to go back to the origins, back to our original instructions.”

That’s not just true on Mohawk land. Native tribes are all one people, one family, Driver said. Similar traditions span across tribes, components of an ancient culture that are indispensible when working toward a positive future.

“I’m proud for your children,” Cherokee member Oneida Bush told the Mohawk women. “We would love to start something like that down in Snowbird where we’re at.”

Bush said she is working with a group of women on The Doula Project, a group dedicated to bringing traditional aspects back to the process of childbearing. But young people’s participation in traditional practice in Cherokee is not yet as far along as in Mohawk.

“The barriers are there’s not enough adults that even know now,” Driver said. “They don’t know the traditions, our customs.”

Currently, only 219 fluent speakers of Cherokee remain, of which Driver, 70, is one. But as in the Mohawk nation, Cherokee is looking to the young people to carry on that tradition, as evidenced through students at the 11-year-old Cherokee immersion school, New Kituwah. Childish voices are once more beginning to speak the native tongue.

Maintaining — and growing — an ancient culture amid a modern world is a daunting task. But it’s a battle worth fighting, one in which victory is vital if tribal communities are to flourish.

And, Driver was quick to say, it’s not a battle without hope.

A good time had by all

The three days of 2015’s Native Health Conference were packed with information, emotion and a pervading sense of spirituality, a recipe that met with overwhelmingly positive feedback and plans to bring the conference to Western Carolina University again next year — the planned theme would focus on mental health and well-being.

“Several of the key program people said it was the best event they ever attended regarding native health,” said Lisa Lefler, director of WCU’s Culturally-Based Native Health Program and conference organizer.

This was the conference’s second year, with the inaugural 2014 event held in Washington, D.C.

“What we learned last year was how important it was that all these people who don’t normally talk to each other have an opportunity to learn from each other,” said Gwen Isaac, curator of North American ethnology at the Smithsonian Institution’s National Museum of Natural History and one of the organizers of last year’s conference.

The goal was to create an experience that felt more like a conversation than a convention, and that’s exactly what happened, Lefler said. People shared experiences and exchanged ideas, all against the backdrop of the Western North Carolina mountains, the Cherokee homeland.

“It was more than just a discussion,” Lefler said. “They felt like it was something that had some teeth, and with the funding agencies there they could give us some guidance about funding opportunities. It made it very real to people.”

Native presenters had the opportunity to communicate the importance of their culturally-based interventions to the federal representatives attending, making clear the need for initiatives that focus on community engagement rather than data and academics.

“Answers to community problems are already in the community,” Lefler said.