Business is bustling in downtown Waynesville 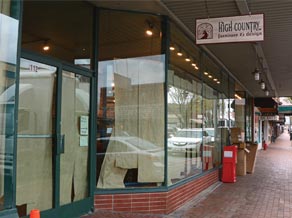 Downtown Waynesville has had a flurry of changes lately. As previous tenants move out, new ones move in and improvements are made to the buildings lining Main Street.

While change and upgrades are always in motion, the most important thing is that the buildings are occupied. Buffy Phillips, executive director of the Downtown Waynesville Association, said downtown spaces are almost at 100 percent occupancy with the exception of a few office spaces within the downtown district. Full occupancy is an ideal situation going into the busy spring and summer tourism season.

Ron Holehouse purchased the former O’Malley’s building on Main Street in 2012 and has been in the process of gutting the building and putting it back together. Now he has found the perfect tenant to occupy 4,000 square feet of space.

Jeanie and Tim McBride plan to turn the building formerly occupied by a pub into a high-end furniture store and plan to open before summer. The couple owned the same type of buisness in Beaufort, South Carolina, for 10 years before selling it and retiring in Waynesville. But it turns out that retirement isn’t suiting Jeanie all that well and she’s decided to keep pursuing what she loves.

She and her husband Tim travel to Indonesia about every four months to select pieces for their store. They specifically look for antique farm tables, armoires and cabinets that are made by local crafters.

“Were always looking for the unique pieces that will nicely fit into a home,” she said. “We go into villages where locals make and sell their goods.”

Holehouse is still working on renovations, but the McBrides hope to open up shop in early summer.

Doug Worrell, president of High Country, said Pheasant Hill’s exit presented a perfect opportunity for his business to expand, and he can’t think of a better location than downtown Waynesville.

“We’re excited about what’s going on downtown — it continues to be a draw for people from all over the country,” he said.

Worrell expects to have the new location open sometime in April after some renovating and painting is completed. The main floor will feature an expanded showcase of the High Country West store. With the extra space, Worrell said the store could now offer outdoor furniture, mattresses and pool tables.

High Country also plans to utilize the coffee and dessert bar that was popular when Pheasant Hill occupied the building. Worrell is currently seeking the right person to manage the café portion.

With the move to the new building, High Country West will close temporarily while Worrell works on something new for that space.

“It won’t be furniture though — maybe a home accents type of place but it’s still coming together,” he said.

Paper will cover the windows while that process is under way, and Worrell hopes to have it back open in June. The downstairs portion of the former Pheasant Hill building is also having some work done before High Country can utilize the space.

New bar to open on Branner

The bar will feature 40 craft beers and ciders on tap, more than 300 brands in stock, wine options and a new venue for live music in Waynesville. The colonial-style farmhouse, which was built in 1920, provides a unique floor plan, a large sun porch and various rooms where individuals or large groups can create their own atmosphere.

The property is located on nearly an acre of open land, providing ample room for our outdoor beer garden and music venue. Corley said the enclosed beer garden would be able to accommodate more than 300 people, making it an ideal location for regional and national musical acts, wedding receptions or family gatherings.

Corley said the name Mad Anthony’s was chosen to honor the Revolutionary War general for whom Waynesville is named (Gen. Anthony Wayne). He hopes to have the business open in May.

“We have a passion for great beer, great music and great entertainment,” he said.  “Whether you’re a local, a tourist or just passing through, Mad Anthony’s will be the perfect place to stop in, take a load off and relax among new and old friends.”

Many were sad to see the Movie Time Video Rental at 178 S. Main St. go out of business a couple of months ago, but it gave Cook’s Carpet and Flooring a chance to expand their operation. Cook’s was formerly located two doors down from Movie Time with about 1,300-square feet of showroom space.

“The community has been so good to us there (in the former location) it allowed us to grow into a state-of-the-art facility,” Chuck said. “Without their support we couldn’t have done it.”

Cook’s Carpets is a 40-year-old family business and is part of the Abbey Carpet franchise. Being a part of the larger franchise allows Cook’s to buy as a larger group and offer lower prices for customers. The Cooks moved the business from Murphy to downtown Waynesville about three years ago.

While the Baker family serves food and beer at their downtown Waynesville location, they do their brewing in a building off of Dayton Drive in Waynesville. The taproom has been steadily busy since opening its doors, and the brew is receiving high praise.

Julie and Harry Katt of Maggie Valley recently purchased the former Thai Spice restaurant on Main Street and renamed in Blossom on Main Thai Fusion. The Thai fusion menu has been expanded but still includes customer favorites like Pad Thai, Thai curry dishes, spring rolls and more. The restaurant offers homemade recipes by Thai Chef Den, who ensures that his food is unique and authentic to his homeland.

Smoky Mountain Sub Shop on Miller Street will be adding more room for customers in the next couple of months. The local lunch post will be taking out a wall and expanding into the space next door. Just Ducky, a children’s clothing store, occupied the space but closed up shop a few weeks ago.

Sub Shop owners Robert Kuhhirte and Randy O’Quinn are excited to be able to add more seating for their loyal customers. Knocking down the wall in between the two spaces will allow the sub shop to add another 1,000-square feet to its business and about another 30 chairs.

“We’re going to to decorate it with the same feel as the space we have now,” O’Quinn said. “We want to keep it small and cozy.”

The sub shop is still waiting on approval from the town of Waynesville before the renovation plans can begin in the next couple of months.