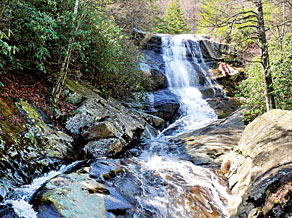 I was commiserating with a friend who works for the Forest Service just after it was announced that they were taking a step back from the plan revision process to schedule another round of public meetings.

The FS rolled out a “draft” management plan last fall after a series of public meetings. The plan, while clearly labeled “draft”, placed around 700,000 acres of the million or so acres of the Nantahala and Pisgah national forests in management areas deemed appropriate for logging. To say the plan caught some stakeholders off guard is like saying the Grand Canyon is a ravine in Arizona.

The FS and proponents of the draft plan quickly tried to walk back the 700,000-acre claim stating that there were already safeguards in place that would protect much of the area from commercial logging. That is likely correct, plus records from past years show that only about 1,000 acres per year have been logged from our national forests over the past decade.

But, there it was in black and white and yellow or whatever other colors mapped out management areas — 700K acres in proposed timber management areas. There was a groundswell of protest that probably left FS managers with visions of “Don’t Cut Bluff” signs and bumper stickers dancing in their heads.

My friend said that the pressure within the agency to come up with an appropriate plan was intense. My friend went on to note that FS employees know the Nantahala and Pisgah national forests are special places that deserve special attention and expressed wishes that this little break might give pause and allow everyone to focus on doing things, “… the way the resources and all interested parties deserve.”

What I heard struck a chord and I posited a question, just to ensure that I had heard correctly, “Wouldn’t it be nice to one day be in a place where we could put the best interest of the forest first instead of trying to parcel it out to all the different users?”

Ah-ha! It hit me. You know, those ah-ha moments — like when you’re in your hotel in Charleston and remember you left the stovetop’s right front burner on?

I am sure that, shortly, there will be announcements of dates and places for upcoming meetings regarding plan revision. Show up, en masse, with your signs and bumper stickers declaring “Put the Forest First!”

I believe that these are signs FS personnel would welcome — and they would welcome your support in putting the resource first and welcome looking past the next 10 years (the next 100 years) to a place where the Nantahala and Pisgah forests are the healthiest, most robust forests in Eastern North America.

There are dozens (probably more) of paradigms that will have to be addressed in this quest to create the healthiest forests we can create, and I propose to talk about some as the process progresses. And I welcome your comments and criticisms and will address them as fully as I can either through personal emails or through “The Naturalist’s Corner.”