Conference digs toward the root of hunger in WNC 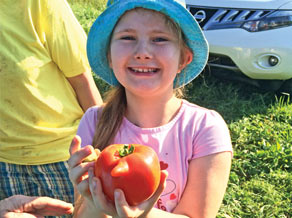 Sharing food can be a simple thing. Like passing a bag of trail mix to the hiking buddy who forgot to pack lunch, or ladling an extra bowl of chili for the neighbor who stopped by at dinnertime.

But what if the person who’s missing lunch isn’t someone you know? How do you find out who could use some more and connect them with the people who have extra?

It’s a tough problem, and its complexity is the reason Come to the Table, a bi-annual regional conference of the Rural Advancement Foundation International and N.C. Council of Churches, supported by the Duke Endowment, exists. The western conference, held at Southwestern Community College in Sylva, brought together faith-based organizations with growers and non-profit directors, all dedicated to ending hunger in Western North Carolina.

“There’s plenty of food and there’s plenty of hungry people,” said Bill Walker, gleaning coordinator for the Society of St. Andrews. “It’s just making sure we can fill that gap.”

The western counties have a long tradition of agriculture and self-sufficiency, but they also have high rates of poverty. While the overall poverty rate for North Carolina was 17.8 percent in 2013 according to the U.S. Department of Agriculture, rates in WNC counties hovered above 20 percent, with Jackson County’s rate reaching 24.2 percent. Rates were even higher among children and the elderly. In 2013, 31.7 percent of Jackson County children under 18 lived in poverty.

But, as Walker said, there’s plenty of food to go around. To spur discussion as to the wheres and hows of getting the unused food to people who need it, the conference featured workshops about creating community gardens, capturing “waste” food in time to redistribute it, issues that farmworkers face, the mechanics of accepting food stamps at farmers markets and plenty more. It was all good, useful information, Walker said, but probably the most important part of the conference is the fact that it brings people who care together under the same roof.

A spark from conversation

That gathering of minds was the catalyst behind the birth of Haywood Gleaners, a group Walker works with closely. Haywood Gleaners uses volunteers to harvest left-behind produce — food that otherwise would have rotted into the soil — and get it to people who need the food.

“Haywood Gleaners started two years ago at this conference with a conversation,” said Carol Larson, a volunteer with the group, during the “Rescuing Food” class.

Since Jim Geenan, Haywood Gleaners director, and Walker hatched the plan in 2013, the group has grown to include 150 volunteers working with 40 growers and distributing to 35 different sites. Volunteers reach out to farmers to find out who’s OK with letting gleaners pick up the leftover produce. They talk to vendors at farmers markets to secure donations of unsold food when the market ends. They process fruits and veggies as canned preserves, they drive the goods to food banks and homeless shelters, they operate a phone tree and organize email communications.

“Haywood County is rich in food-producing, agricultural traditions but also a high poverty level, and our goal was to find a way to connect the two,” Larson said.

Connection may be a goal for the gleaners, but it was also a decisive theme of the conference as a whole. Connections are what make or break efforts to combat hunger — connections between growers and gleaners, between food banks and grocery stores, between the wealthy and the impoverished.

“We don’t want people to reinvent the wheel,” said Francesca Hyatt, Come to the Table director. “We want folks to have the opportunity to learn from existing projects.”

Projects like the Conetoe Family Life Center, a 25-acre community garden in Eastern North Carolina aiming to quell the tide of deaths from diabetes; or High Country Community-Supported Agriculture, a cost-share program in Boone that gives discounted produce baskets to low-income families while paying farmers market value for their goods; or Share the Harvest, a food growing and distribution effort that formed when leaders of several churches in Guilford County realized their individual community gardens would have a greater impact if they joined forces.

What these projects have in common is that they’re each community-specific, each designed to fill a gap in the places they serve using the resources available there.

“You don’t have to start an organization that’s doing this,” said Jesalyn Keziah, community food coordinator for Resourceful Communities, which did case studies of each of the above organizations. “You find the organizations that are doing this and find how you can uplift that.”

Tuning in to the region

Despite its high poverty rate, WNC seems to be doing a pretty good job of facing its problems, Hyatt said. The region has a strong food policy council, “one of the best networks of gardens [that give to food banks] in that state,” and generally just “a lot of momentum.”

“I see the relationships and the networks and the people who are working on food access to be incredibly hardworking and resourceful and in tune with what the specifics are of this region,” she said.

Keeping up with those efforts and understanding who is doing what is always a challenge, because throughout the region, many groups work to attack poverty on many different levels. The less each organization replicates the others’ niche in the landscape, the more cumulative impact their efforts will have.

That’s why churches are such an important part of the line of attack, said Adam Bigelow, director of the non church-based Cullowhee Community Garden. They tend to have a pretty good feel for what’s happening around them, they have a mission to serve and they’re made of members from many different walks of life and ties to the community. Plus, the gardener said, they’ve got all those flat, grassy lawns that could quite easily be converted to rows of veggies.

“One of the things that is needed in food relief efforts is networks of organizations and people,” Bigelow said. “Faith-based organizations already are established networks, so just the linkages themselves are huge.”

To put it simply, he said, “At some point in the season, you’re going to be flush with yellow squash. How do I get that and keep it from rotting?”

Turns out, Bigelow’s question is not so simple, because it points to a much more complex question. The causes of food insecurity in Western North Carolina are many — generational poverty, unemployment, geography, lack of technology and lack of infrastructure, for starters — so the organizations that pop up to address those issues are similarly numerous.

“The more we can establish lines of communication between those working directly on the front lines and those working to fund or address the problem at a larger level, the better off we’ll be,” said Emily Edmonds, director of the Western North Carolina Food Policy Council. “Sharing in those efforts helps eliminate repetition, leverage more resources, access infrastructure and funding and generally helps keep from having everyone on their own reinventing the wheel.”

It’s a never-ending task, but one whose fruit is good when it ripens through the information and collaboration that happens at Come to the Table.