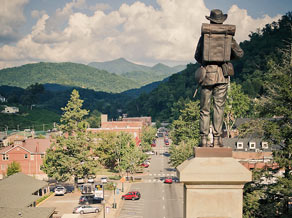 A parking enforcement ordinance in Sylva is making an appearance in the state Legislature.

“After the town board passed the ordinance, we received an email from a downtown business owner asking when the General Assembly authorized us to use wheel locks,” said Town Manager Paige Dowling. “As the town attorney [Eric Ridenhour] and I were looking into it, we realized that some towns in North Carolina have authorization from the General Assembly to use them. Others don’t.”

The town passed the ordinance in January to give police a tool to enforce town-parking rules, a challenging task. At the time, Police Chief Davis Woodard told the town board that they were sitting on $7,500 worth of unpaid parking tickets issued since 2011, and some of the people to whom they were issued had told him outright they had no plans to pay. The ordinance allowed police to put wheel locks on violators’ cars — if they’d already been issued a parking ticket that had gone unpaid — and charge a $25 unlocking fee. If the money wasn’t paid within 24 hours, the ordinance said, the car could be towed at the owner’s expense.

In the writing of the ordinance, Dowling said, town staff looked at 10 or 15 different wheel lock ordinances and saw how common of an ordinance it was. It never occurred to them it would require state action to enact, and Dowling is still not completely sure that it is.

“We couldn’t find whether it was a requirement or not and we didn’t want to overstep the general police powers listed in general statutes,” Dowling said.

The need for state action stems from the fact that North Carolina, like 40 of the 50 states, is a Dillon’s Rule state, said Sen. Jim Davis, R-Franklin, who introduced the bill rubberstamping Sylva’s ordinance. Dillon’s Rule, named for a chief justice of the Iowa Supreme Court in the late 1800s, basically says that local governments can do only what the state has expressly authorized them to do and when questions arise puts the benefit of the doubt with the state rather than with the local government.

Davis isn’t a fan of that way of doing things — he said it was “really disturbing to me” when he first got into politics — but said he’s glad to offer his support. The bill has passed the Senate and gone through a first reading in the House. As of Tuesday afternoon, it was awaiting hearing in the Committee on Local Government.