It just couldn’t get any better for young Hornets fan 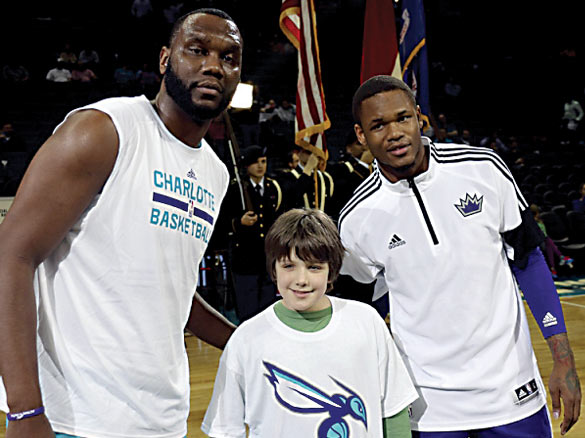 Over the past few months, my 10-year-old son, Jack, has developed an insatiable appetite for all things basketball. We spend hours out in the driveway playing “around the world” or “pig” (an abbreviated version of “horse”), where he unveils a dazzling array of turnaround jumpers and a truly impressive aptitude for the old school bank shot. He loves going to the fitness center or church and playing pick-up basketball with much older guys, even if he is not quite ready for that level of play and spends much of his time on the court nipping at the heels of the bigger guys like a particularly relentless Chihuahua, trying to steal the ball or harass them into making a bad pass.

Most of all, he loves the Charlotte Hornets. He knows all the players’ names, even their nicknames: Michael Kidd-Gilchrist is “MKG” and Al Jefferson is simply, “Big Al.” Jack adores Big Al, the biggest guy on the team at 6-11 and the Hornets’ primary offensive threat and top rebounder. He is the biggest star the franchise has had for years, leading them to a surprising berth in the playoffs last season.

When we play NBA 2K15 on Xbox, Jack likes being the Hornets so he can be Big Al. When the Hornets play on television, Jack loves cheering them on, watching carefully, studying their moves, learning more and more about the game. If I am in another room while the game is on, Jack provides helpful play-by-play commentary so I don’t miss anything.

“And there goes Big Al with another slam dunk!” he yells, followed moments later with, “And Big Al gets the rebound! Big Al is DOMINATING!”

A week or so ago, I told Tammy that I was going to get some tickets and take Jack to his first Hornets game in Charlotte as a surprise. I had kind of zeroed in on the Bulls game for Friday, March 13, but I had no luck landing decent tickets, so just for kicks, I checked out eBay for tickets for the Hornets and Sacramento Kings game. Sure, it was on Wednesday — a school night — but what if I found a great deal on some great seats?

Sure enough, an optometrist who lives somewhere near Charlotte had tickets for sale on eBay—not just any tickets, but tickets about 12 rows from the court. I jumped on them, and then talked Tammy into an impromptu family trip to Charlotte. We’d get the kids out of school an hour or so early and hit the road, not telling them our plan until we got into the city, where Jack was sure to put the pieces of the puzzle together.

Once we got through Forest City and into Gastonia, the signs for Charlotte became more frequent and more obvious.

We found a place to park and then had time for a nice dinner a block or so from Time Warner Cable Arena, and then Jack and I split off from the Cox women — who had designs on the mall — and entered the arena about 45 minutes early. He was literally trembling with excitement.

“Why don’t we go check out our seats?” I suggested.

I knew our seats were going to be good, but I had no idea just how good until we entered our section and went to the appropriate row. Hornets shooting guard Gerald Henderson was on the court taking some pregame warm-up shots, and there were a few people milling around, but we basically had the section to ourselves.

“I cannot believe we are really here,” Jack said. “This is the most amazing thing ever! Dad, there’s Gerald Henderson! I cannot wait to see MKG, and Cody Zeller, and Big Al!”

Just as I was explaining that the teams would probably take the court for warmups in about half an hour, we were approached by two nice women who worked for the Hornets. They asked us our names and asked Jack if he would like to be the team’s honorary captain for tonight.

“Wow,” he said. “Are you serious? What would I actually be doing?”

They told him that he would go out on the court just before the singing of the national anthem and would meet with the captains of both the Hornets and the Kings. He would shake their hands and get his picture taken, and his name would be announced in the arena in front of all the fans.

He looked over at me for a moment to see if this was some kind of elaborate prank that I was pulling on him. It wasn’t.

“Yeah, sure, I’ll do it,” he said, with a matter-of-fact shrug that indicated that he was in a complete state of shock.

They told us to move down to the tunnel about 20 minutes before tipoff, where we would be instructed what to do next. When we got there, they gave him a complimentary Hornets T shirt and explained exactly what he would be doing. Even they were not sure which Hornet would be captain for tonight’s game — maybe Kemba Walker, maybe MKG, maybe Big Al.

About five minutes later, they escorted him to half court, and a few minutes after that with the teams warming up on either side of the court and 16,000 fans looking on, on he went to center court to meet the captains — Ben McLemore for the Kings and, are you ready? — Big Al Jefferson for the Hornets!

He shook Big Al’s hand and tried to speak, but found that he could not. Big Al patted him on the shoulder a few times, and then put his hand on Jack’s back as they posed for a photograph, soon to be framed and on Jack’s bedroom wall until the end of days.

“He was great! It was great! I feel great!” he said in a single breath. “I am never taking this shirt off!”

We returned to our seats, which as it turned out were right behind the seats occupied by Cody Zeller’s parents. Then we watched a great game which the Hornets lost when MKG got robbed on a bogus charging call in the last minutes of the game.

It didn’t matter. Nothing was going to diminish this experience for the team’s honorary captain.

“I bet we’ll beat the Bulls on Friday,” he said. “Dad, do you think we could go find a Big Al jersey? Do you think I could ever play for the Hornets?”

“Why not?” I said. “Didn’t tonight prove that anything is possible?”

(Chris Cox is a writer and teacher who lives in Haywood County. His most recent book, The Way We Say Goodbye, is available at local bookstores and at Amazon. This email address is being protected from spambots. You need JavaScript enabled to view it..)