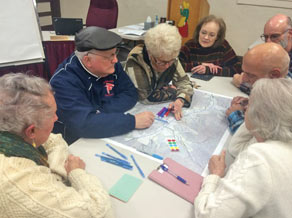 Maggie Valley is attempting — for the third time — to put together a plan to improve the town’s image, aesthetics and economy.

About 60 people attended a public hearing last week to share their ideas of what Maggie’s town center should be, but many were skeptical about whether this plan would be any different than the others.

Tom Mallette, owner of Realty World in Maggie Valley, said he had gone through the Driving Miss Maggie plan and the Moving Maggie Forward plan. While the plans contained good ideas, he said, nothing was ever implemented.

“What will be different about this process?” he asked.

Town Manager Nathan Clark said several factors made this process different than the other plans sitting on a shelf in his office, including more public input, a cohesive board of aldermen and a town center plan that will offer solutions in addition to ideas.

“This turnout indicates there is a tremendous amount of energy that’s there that may have been lacking in the past,” he said. “Right now we have a board of aldermen committed to the town’s future that we haven’t had in the past.”

Clark said this process, which includes public input at each stage, would result in a list of large and small projects that the town could begin to develop while trying to secure the necessary money.

The town allocated $25,000 in last year’s budget to create a downtown master plan and hired J.M. Teague Engineering to lead the process. Representatives from JM Teague, McGill Associates and Chipley Consulting were present at the public input meeting to lead the discussion about the future of Maggie Valley. Participants shared tables that each had a Maggie Valley map.

When people started outlining the focal points in town and highlighting improvements that could be made, the project team found that a majority of residents shared the same ideas for a town center.

The most pressing challenge is trying to create a downtown feel in a municipality that has a major highway as its primary commercial strip. Many residents said they saw the town center laid out from the Maggie Valley Festival Grounds to the town hall on Soco Road. Others thought the town center should begin at Parham Park at the intersection of Moody Farm Road.

Maggie resident June Johnson, who is also part of the project oversight group, said she would like to see bike lanes on both sides of Soco Road, a trolley system between Waynesville, Lake Junaluska and Maggie Valley and improved sidewalks.

“People aren’t going to walk or sit unless there are some shade trees along the sidewalks,” she said.

Johnson also suggested trying to slow traffic down through the town limits by dividing the highway in several areas with green space on the medians.

“We need something to stop this drag strip,” she said.

Tammy Wight, a motel owner and a member of the Maggie Valley Area Lodging Association, shared the ideas from her table, which included her husband and Maggie Valley Alderman Phillip Wight. Their ideas included trolley and carriage rides through town, a botanical garden, a town history museum and a veterans memorial.

Tammy said the old Plott House on Moody Farm Road would be an ideal location for a town historical museum and a veterans memorial could be placed on town hall property along with a water park feature similar to Splasheville in downtown Asheville.

Part-time resident Kathy Brown wanted to know what the town was going to do to help sustain businesses.

Clark said the root purpose of government was to provide infrastructure and services — something he feels the town does a great job with and something the town center plan will help improve.

He said the town doesn’t do well when it tries to dip into the business side of things, including tourism and other industries. The town does have a chamber of commerce, a hotel-motel association, an area lodging association and a tourism board to work on the business and marketing.

Pat and Linda Amato have lived in the valley for 10 years and have seen several improvement plans come before the town board with no results. But they said they attended the public hearing in hopes that this time will be different.

“I hope this organization and these aldermen can find a doable plan and possibly get something in motion in the next four years,” Pat said. “For the first time I think the aldermen are in unison and are going in the same direction. We’ve got to move forward or we’ll die.”

After hearing everyone’s input, Reuben Moore with J.M. Teague Engineering said the project team would compile all the information and report back to the project oversight group. A first draft of the town center plan will be presented at a second public hearing that will be scheduled in May or June.

While residents shared many different ideas, all of them agreed that the town must first address dilapidated structures and unsightly property along the corridor.

“Let’s get rid of the junk,” Mallette said as applause broke out in the room. “Everyone fix up their buildings.”

Cleaning up the town is a priority for the board of aldermen and the town center project oversight group.

During a recent workshop, the board of aldermen said this would be the year that the eyesores in Maggie Valley would be addressed, including junk vehicles, dilapidated buildings, trash, vegetation and illegal signage. It is a matter of enforcing the town’s ordinances.

Town staff will need the full support of the board as this type of enforcement is difficult and creates complaints. The board is in consensus that there would be no need to develop a downtown master plan if the commercial district is not cleared of eyesores.

Scott Neilsen, co-owner of Cabbage Rose in Maggie Valley, said he didn’t want the town to only be a waypoint en route to Cherokee.

“All we’re known for is the casino and garbage,” he said.

Town Planner Andrew Bowen said the town has several ordinances on the books that will help him with a big “spring sweep” this year, including ordinances that address zoning and signs, junk cars, solid waste, weeds and unwanted vegetation.

“A lot of it is just getting out in the community and trying to work with people, especially with the tourist season coming up,” he said.

Bowen said the ordinances haven’t been strictly enforced because the town has had other priorities. But it is a high priority this year, and he’s found it’s more productive to do one big sweep and work together to get everything cleaned up.

“Over time things accumulate — it might not be anybody’s fault,” he said. “I’ll probably send out a letter to business owners letting them know it’s a town priority and we’ll try to work with them to get it done. If there’s still an infraction of an ordinance, we’ll take another route, but we have to give people enough time to fix the problem.”