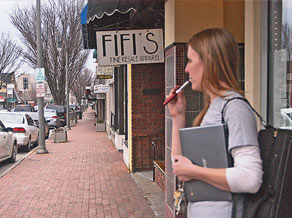 “Where will the smokers go?” has been the question on many people’s mind since the town of Waynesville and Haywood County commissioners both announced proposed smoking bans.

The county’s proposal would ban all tobacco use on all county property, while Waynesville’s proposed ordinance would go one step further and ban tobacco products from being used within a 50-foot radius of public entrances in all business districts. That means smoking would not be allowed on downtown sidewalks.

“As Haywood County has moved forward with its tobacco ordinance prohibiting smoking and tobacco use on county properties, the number of individuals who would be moving to public sidewalks and areas in front of or near businesses will increase,” said Waynesville Town Manager Marcy Onieal in a memo to the board. “In an effort to be cognizant of health considerations and in order to provide citizens and visitors with a smoke-free environment, the Town of Waynesville has drafted its own Tobacco Ordinance for consideration.”

Waynesville Mayor Gavin Brown thinks banning smoking is a good idea in theory, but he said the merchants would have to embrace the idea for it to be successful. He said the town first started talking about updating its tobacco use policy last year after Canton updated its ordinance, which is almost identical to the one Waynesville is proposing.

“Having been a smoker myself at one point … I understand the problem, but it’s a public policy issue and now it’s become acceptable to discuss it,” he said.

Haywood County Commission Chairman Mark Swanger said he also remembers the groaning several years ago when smoking was banned inside bars and restaurants.

Buffy Phillips, executive director of the Downtown Waynesville Association, compared it to the ban on dogs during downtown festivals. The ban on dogs at festivals is now eight or nine years old. Fear that the dog ban would dampen attendance at festivals hasn’t proven true, Phillips said.

On days when District Court is in session, dozens of people can be seen outside the Haywood County Justice Center on Main Street taking a smoke break. Without a designated smoking area near the justice center and historic courthouse, the town and downtown merchants were concerned smokers would migrate to downtown sidewalks and the mini park on the corner of Main and Depot streets.

“Those smokers are going to filter out onto our streets and sidewalks in the town and into our public areas. If that happens, something has to be done,” Phillips said.

“The commissioners will decide what is the best course of action as to the policy and if it should be enacted at all, either as is, or altered to include a designated smoking area,” he said.

Swanger said there might be a need to create two smoking areas so opposing parties in a court case don’t end up in close quarters.

“You don’t want parties that are adverse to each other, whether it is a criminal or civil matter, crowding around the same smoking area,” he said.

Phillips said some merchants have already complained about cigarette smoke wafting inside their businesses when the door opens, especially merchants located near bars where people step outside to smoke.

“Everybody comes outside and smokes, and the businesses next door can’t keep their door open because the smoke goes in there,” she said.

It’s also an issue for merchants with sidewalk benches just outside their storefront. Phillips said a propped open door is a proven marketing technique among main Street merchants to encourage foot traffic. But with smokers camped out on a bench out front, merchants have to choose between smoke filtering into their store or keeping their front door shut.

Sidewalk benches are popular resting spots for husbands passing the time while their wives shop. Some wives could find their shopping excursions curtailed if their husbands can’t smoke while they wait.

Carrie Keith, owner of Twigs and Leaves in downtown Waynesville, said she hadn’t had any complaints about smoking, but she understands how it could be a problem for businesses located next to restaurants and bars.

Curtis Henry, owner of Café Le Rouge on Main Street, said his other restaurant, Taste of New Orleans, would be moving to Main Street in April. He said a smoking ban downtown would no doubt hurt tourism if smokers have nowhere to go.

“If my customers get harassed for going outside to have a cigarette, I’m not going to be happy,” he said. “I don’t smoke, but we can’t be running people off with that kind of crap. We don’t have the right to tell people how to live their lives.”

Jim Davis, owner of The Jeweler’s Workbench, said he was in favor of banning tobacco use in town, especially on Main Street. While he hasn’t received any complaints from customers, he said he could see how it would be annoying for non-smokers to be subjected to smoke on Main Street.

“I don’t think it will stop people from coming downtown as long as there’s proper signage,” he said.

Richard Miller, owner of the Classic Wineseller and  the president of the Downtown Waynesville Association board, said he is concerned about whether the ordinance will be tourism-friendly.

“I’m not in favor of people smoking, period, but now we’re getting into people’s rights,” he said. “How much more can government try to protect us from ourselves?”

Miller also worries that the town is making a knee-jerk reaction to the county’s proposed ordinance and not thinking through how it will affect downtown tourism. He said he planned to attend the town’s public hearing and ask how tourism-friendly the ordinance is going to be and what economic impact yelling at tourists for smoking will have.

There are also plenty of service workers downtown who will need to find a new spot to take their smoke breaks.

Matt Kuver and Chris Mattox both work in the kitchen at Frog’s Leap Public House on Church Street and take their smoke breaks behind the restaurant. They understand the dilemma of people smoking in downtown but feel like the 50-foot rule would be too much because there’s nowhere to go downtown where they wouldn’t be within 50 feet of a business door.

“I think the 50-foot limit is too broad,” Kuver said. “But if there is a spot (designated) I can walk to, it’s not going to bother me.”

Mattox also said such an ordinance would be difficult to enforce. He said it would be a better idea just to ban smoking during downtown events, which is when many families with children are downtown.

Onieal said the town’s ordinance was drafted after researching multiple tobacco use policies in other municipalities and a discussion with police, recreation staff and the Downtown Waynesville Association board. She said a lot of research was done on how the proposed ordinance would be enforced.

The penalty for violating the policy would be a $50 citation. Town employees who violate the ordinance can be subject to disciplinary action, according to human resources policies. Any town employee acting in an enforcement capacity may issue a citation.

Brown said he was also curious about the practicality of how the ordinance will be enforced. It is something the board will have to discuss.

“The devil’s in the details,” he said. “We’ll probably just have to feel our way through the process. My only caution is let’s make sure we have a way of enforcing it to carry out the intended effect.”

Ultimately, Onieal said, the smoking ban is about trying to co-exist in shared public spaces. Downtown in particular has a high volume of foot traffic in relatively close quarters, particularly during festivals, parades and busy shopping days during tourist season.

Brown said he didn’t think the smoking ban would hurt tourism as long as it is handled carefully. While people do have personal freedoms, he said one person’s rights ends where another’s begins. Non-smokers don’t like to have to smell someone else’s smoke as they walk down Main Street.

“I think most people will appreciate that we are not allowing smoking,” he said.

Just like getting a parking ticket downtown may upset a few tourists, Brown said, the new rule, if it passes, may upset some visitors who get a citation or who learn they can’t smoke downtown.

“I don’t mind losing those kinds of tourists. Just like with parking tickets, we lose a tourist or two, but we can’t let the tail wag the dog,” he said. “Overall, I think people will be supportive of the idea.”

Waynesville’s proposed Tobacco Use Policy prohibits use of any tobacco products:

• On sidewalks in front of any buildings owned/leased by the town.

• Within a 50-foot radius of a public entrance of a building owned/leased by the town.

• Within a 30-foot radius of a non-public entrance of a building owned/leased by the town.

• Within any park or greenway owned/leased by the town.

• Haywood County commissioners will hold a public hearing for the proposed ordinance at the Historic Courthouse 5:30 p.m. Monday, March 16.

• The town of Waynesville will hold a public hearing for the proposed smoking ordinance at Town Hall during its March 24 meeting.