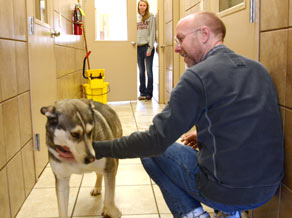 A dispute between Haywood County neighbors could result in one couple shutting down a nonprofit operation that is near and dear to their hearts — or another couple selling a home where they’ve farmed for 40 years.

These seem like the only options since the neighbors have reached an impasse in a dispute over barking dogs. Helen and Will McLeod say they’ve done everything within their power to address the noise coming from their nonprofit rescue animal shelter. Judy and Steve West say the barking dogs are driving them mad and negatively impacting their health.

After mediation and a trial have failed to solve the problem, it appears the only solutions may be extreme. The Wests may pursue a civil suit and try to shut down the shelter, or they will try to sell their home and find somewhere quieter to live.

Judy said she and her husband would be meeting with their attorney in mid-March before deciding how to proceed. If the Wests can sell their house for a good price, Judy said, that might be the best option. But it would mean the couple would no longer be able to do what they love — farm their land.

“We hate to give up farming and our fruits and vegetables and the tailgate market, but at our age, for our peace of mind and sanity, I feel like we don’t have any other choice,” she said.

The Wests live about 100 feet downhill from Duke’s Animal Haven, a temporary shelter for rescue cats and dogs located just off Stamey Cove Road. The McLeods have also owned and operated a boarding kennel, Duke’s Pampered Pets, right next door to the shelter, for 12 years.

Judy said the barking dogs at the shelter have disrupted her peace of mind since it opened more than a year ago.

“With the rescue shelter and the boarding kennel, they can keep 40 dogs at a time,” she said. “Sometimes it’s so unbearable you want to scream, and I do.”

Waynesville Attorney Chase Wells represents the McLeods in the case.

“Duke’s Animal Haven’s primary purpose is to keep dogs from Sarge’s (Animal Rescue),” Wells said. “They hold rescues temporarily for one to three weeks, then they’re sent to foster homes, are adopted or sent to another facility in another state where they’re more likely to be adopted out.”

Wells said the Wests started calling the sheriff’s office to complain about the barking dogs before contacting his clients. The Wests then went to the magistrate judge and swore out charges against William McLeod for violating the county noise ordinance.

The case went to court Jan. 15 and the judge dismissed the claim because it charged the wrong person. William McLeod owns Pampered Pets, but the Animal Haven is a nonprofit corporation.

But Wells said he doesn’t think the case is over because Judy West has threatened to bring a civil suit against the shelter.

“Presumably it would be a claim of nuisance — it wouldn’t have much to do with the ordinance but would have to do with common law right of action for nuisances,” Wells said.

If a civil suit is filed, he said, the Wests could ask for an injunction and temporarily shut down operations at the animal rescue.

Judy said the overarching issue was the lack of zoning within the county. Although the neighborhood where they live is heavily residential, there’s no county zoning ordinance to prohibit someone from opening a business or nonprofit rescue shelter.

“I feel like the county is going to have to enact some of these ordinances to deal with these problems,” she said.

Helen said Duke’s Pampered Pets has operated for 12 years with no complaints from neighbors. Even though it’s a boarding kennel, the McLeods have always tried to take in rescues from the community. In 2012, an inspector told them during a routine state inspection that they could no longer house rescues under the private kennel.

A private donor then stepped in to fund a new facility to house rescues for Sarge’s. The facility has 14 runs that generally house one dog each or sometimes an entire litter of puppies. The animal haven also has several rooms for rescue cats.

Sarge’s doesn’t have a contract with Duke’s but rather a verbal agreement to house the dogs. Sarge’s pays $1,000 a month to the animal haven to offset the cost of utilities, staffing and food.

Helen admits that the dogs do bark, but mostly just during their feeding time in the morning from 8 to 10 a.m. and in the evening from 4 to 6 p.m. An employee takes a couple of dogs at a time outside to eat and do their business.

During a 4 p.m. feeding session, a few dogs could be heard from outside the facility, but the soundproofing material substantially muffled the noise. What could also be heard during the feeding was Judy yelling from her back porch for the dogs to be quiet.

Judy said the barking does continue most of the day. She said the dogs are quiet when no one is there, but when an employee is in the facility from 8 a.m. to noon and from 3 to 6 p.m., it is loud.

“It’s not continuous, but it’s enough to where it feels continuous,” she said.

Judy is still recovering from an infection in her lungs and has been on bed rest for several weeks. She said Steve has high blood pressure and the barking dogs only exacerbate the problem.

“We can’t enjoy our deck,” Judy said. “You can hear them with the doors closed and the windows pulled down and the TV on.”

Before any complaints were ever made, Wells said, his clients planted a row of tall pine trees and shrubs in front of the animal shelter and installed a privacy fence.

When the Wests filed the charges, the case was sent to mediation. Installing soundproofing materials was discussed, but the expense was an issue for the McLeods.

“My clients obtained a donation from a third party to pay for the material and installed it on the inside and outside of the building,” Wells said.

With materials and labor, Helen said, it cost more than $5,000 to install the soundproofing material.

The complaints have continued despite the soundproofing that is 100 percent guaranteed by the company to absorb internal echo. Wells added that the other dozen neighbors in the area have never complained to law enforcement about the noise.

Wells said the Wests installed a camera to record the noise they experience from the dogs when they are out in the runs.

“My clients used their own camera and have footage of the Wests yelling at the dogs and customers and making barking noises in an attempt to provoke the dogs,” he said.

Helen said she has talked to many of the other neighbors surrounding the shelter and the dogs have bothered none of them. She said the Wests tried to get neighbors to sign a petition to take to court, but no one would sign it.

Judy said she spoke to neighbors who said it did bother them, but they were unwilling to get involved because many of them board their dogs at Duke’s Pampered Pets.

While the McLeods say the Wests just don’t like animals, Judy said her children had plenty of pets growing up and they have nothing against animals. Judy just doesn’t believe her rights should be tossed aside for cats and dogs.

“When did animal rights supersede human rights?” she said.

Helen said Sarge’s wouldn’t be able to save as many animals by transporting them to other states if it didn’t have the Animal Haven.

“Duke’s has been a successful boarding facility for many years, and it was a natural progression for them to expand their business. If Sarge’s dogs were not there, others dogs would be,” said Sarge’s executive director Laura Ivey. “The folks involved with Duke’s Animal Haven have supported Haywood County's transport program from day one. Last year alone, with their support, and Sarge’s own foster care program, we saved over 450 dogs through transport to our northern partners. There is no doubt that Duke’s Animal Haven’s help contributes greatly toward saving Haywood County’s animals.”